Despite the miserable weather in the Mid Atlantic this week, I have been able to get some painting done, inspired by Historicon being almost upon us.  Norman ran a playtest of his (now cancelled) Historicon chariot game last weekend, so I made a push to finish off this batch of Libyans:

I got so eager to finish them that I tried to convince myself that spray varnish would work in this weather; after coming out almost white, they were luckily salvaged when I found a cool dehumidified basement for a second coat.

I posted a sample shot of the S-B infantryman the last time around.  The unit is ready for basing, but I am waiting on a batch of basing products from Litko.  I'll report on that when they arrive. 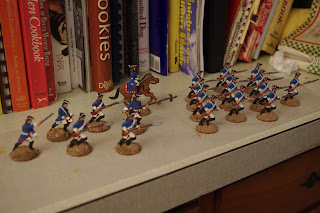 I also mentioned that my next task was to work up a few figures to complete units we acquired last year at Cold Wars.  Here is the first group; three musketeers, a company command element, a colonel and a sergeant major to finish up a regiment of the (not yet permanently named) blue coats.  The original figures (with flesh retouched) are the group to the right.  I tried to match the original painting style as much as possible.

I also painted a standard bearer for the unit.  I got as far as adding a paper flag just before heading out on errands yesterday.  Norman picked it up and painted this, which he says is not quite done yet, while I was gone:
He's also starting to work on the fabled second squadron of Wachovian Hussars ...

I still have one more day before I go back to work on Monday and hope to do a bit more.