Posting time has been a bit limited this week...in the previous post were pictures of the figures I finished up on Columbus Day.  Last Friday was not a scheduled work day, so I was able to sit down and do something with paintbrushes.  Most of the time, I find that trying to ignore the Muses doesn’t come to a good end.  So, having finished a nagging project in 1/72 scale, I found that I was inspired to paint a few more figures just for fun.  Here are two Caesar adventurers, two Caesar 13th century knights, and a Reaper Bones “saproling” done up as a 1/72 tree-thing.  Attempting to freehand the lion’s head on the central figure was a bit chancy, and the shield on the other knight was pre-embossed, so more practice on 1/72 heraldry will be coming up.

With this additional handful of figures, I feel like it’s time to play some sort of single-figure game with them. 1/72s are about at the limit of the practical for individual figure games, in my opinion. My basing system should probably have been designed to put a little more weight into the bases, to encourage the figures to stand through minor table bumps and so forth.  I am looking over Rangers of Shadow Deep as a possible near-term game, but haven’t done an order of battle to ensure that I have most of the miniatures needed yet. 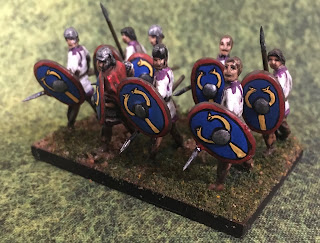 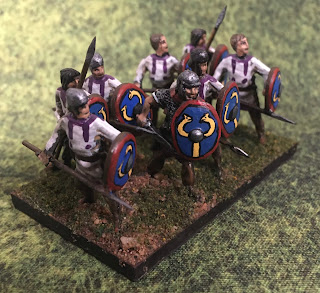 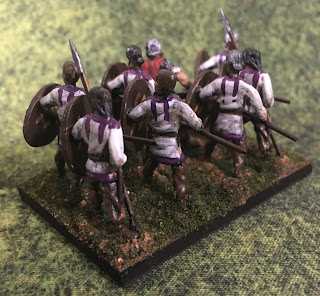 I hope this will be a preliminary report, to be followed by some version of fiction.  I have had a battle in my solo “Northlands” campaign pending for a couple of months, and I was baking some bread this morning.  That gives me about three hours to wait while things rise and bake, so it seemed like a good time to resolve the battle.

The background for this is a raid launched into enemy (Darmis) territory by the King of Verdance, while Darmis was occupied with an invasion of Cold Islanders.  The last game played resolved the Cold Island invasion (in favor of Darmis), so the raiders were generally looking for one good score before heading for home.  As luck would have it, my battle generation system generated a skirmish (to be played with Dragon Rampant), and the forces turned out to be fairly general medieval groups. I therefore decided to use a scenario from Lion Rampant, the Dragon Rampant scenarios being not terribly generic.  I ended up with a convoy action (what else, eh, Ross?). Darmis, with a force of three knights (elite riders), an archer and a scout unit, had the convoy, and the Verdance raiders (a knight, an offensive heavy foot unit, an elite archer, a regular archer, and a scout) had the task of preventing them from getting it across the table.  The convoy player is allowed to attach his three transport elements to any unit, so I put two with the archers (carts I painted in August), and one (an Airfix Maid Marion as a Darmish noblewoman) with a unit of knights.  Having a transport element keeps a unit from being issued attack orders.  It’s not clear whether a countercharge should be allowed, but the Darmish situation was bad enough, in my opinion, that I thought I’d better allow it.  As a solo game, I knew the opponent wouldn’t complain...

As is usual for a Rampant-series game, there were a few turns where initiative turned over quickly, but they pretty much balanced out.  Both sides had their commander with a unit of knights, and lost them to repeated wild charges.  It might have been worth paying the extra points for the command units to be rated as “steady”, not subject to the wild charge rule.  At the end of the game, the Verdance raiders had both of their units of archers pouring arrows on the Darmish archers, who failed courage checks for casualties twice and rallied both times before ultimately routing.  It did prevent them from effectively returning fire.
So, with the noblewoman and her attendants captured, I expected that the raiders will be heading home in the next map move.


All in all, it was an entertaining little game.  It fit in well with the baking, and advanced the campaign a bit, which is pretty good for an afternoon’s entertainment.
Posted by Rob Dean at 5:31 PM 2 comments:

With Barrage preparations having been taking most of my attention this past week, I didn’t get around to posting some recent work pictures.  I am halfway through a stand of 8 later Roman auxilia for the Dux Bellorum project.  The lead group is seen here along with a random Foundry Norman finished up one day when I forgot to bring more Romans to where I was painting.  I’ve still got a dozen or two Foundry Dark Ages figures which have been on sticks for handling, and primed, since about 1998...

The weather was good back on Sunday the 22nd of September, so I set up my casting gear outside and ran up a couple of dozen additional infantrymen (and parts) for the French Revolution project.  That should give me enough pieces to potentially fill out my planned order of battle over the winter.