A Slight Excess of Inspiration

April has generally not been a good month for miniatures gaming in general, although we did get that 40mm Not Quite Seven Years War game in last weekend.  In painting, I have casually been working on a group of figures intended for some sort of urban fantasy game, although whether it will turn out to be a role playing game or some sort of skirmish war-game remains to be seen.  An urban mat from Cigar Box Battles arrived recently, although I haven't yet started on any of the card buildings to develop it.

Of the group shown here, the two in the back were previously shown, and were my test figures from the Hero Forge custom miniatures service.  I am trying to be good about that, and only order them as fast as I am painting them, so they were duly followed by a second order for three figures late last fall, just before moving occupied my time.

The front row includes the first of those three, Violet with her exotic pet, and three Reaper figures from their Chronoscope range.


However, the combination of a 40mm game on the table and the arrival of A Gentleman's War (AGW) has apparently got my Muse working overtime, since I started thinking about dusting off my long-neglected French Revolution figures to use with the rules.  According to my records, I haven't had them on the table in the entire ten years I've been keeping this blog, although my son did run a game at Cold Wars a few years back.  With the Scarlet Pimpernel scenarios we were using, we already have a selection of unusual and personality figures to use with the Cameo Roles rules from AGW, and I'll have to see what else I can create.

That sent me digging through the basement to see whether I had any castings left over from the last round of work on the project.  Now, my painted figures are reasonably well labeled and sorted into storage boxes for easy deployment, but the unpainted figures, especially home cast ones, are generally not.  It took several hours of search to conclude that I have only a handful of potential new recruits, but at least I now know where all the 40mm Renaissance expansion figures are, and have collected the 40mm NQSYW figures into one location.  I set aside what French Revolution expansion pieces I had, and also found some partially painted NQSYW figures to work on while the FRs are being assembled.

I don't know if it's possible to have too many miniatures, but, if it were, being unable to find them when the Muse provides inspiration would likely be a sign...At least the collection of molds for casting more is well organized, so I shall hope for some good weather in the near future.

An Incident from the Not Quite Seven Years War

Ross Macfarlane and I had an opportunity to put a game on the table last weekend, for the first time in a while, although this was the latest in a series of remote games.  I have these tagged as "Skype" on the blog, but we have been using Google Hangouts in recent years.

The Not Quite Seven Years War has traditionally been played using Charge!, with our collection of Prince August and Meisterzinn 40mm home cast figures, but we are scheduled to host a couple of games at Huzzah! in Portland, Maine, next month, and have elected to use With MacDuff to the Frontier.  On Saturday it was time to try out one of the scenarios, Ambush-1 from C.S. Grant's indispensable War Games Scenarios, or "The Green Book".  This action involves a convoy, represented by two wagons in our game, attempting to make its way across the table to a bridge, through some rough territory in which an ambushing force is concealed.  Ross took the convoy, and I took the ambushers for convenience, since the hidden deployment aspects were easier for me to handle as the physical host of the game. Convoy troops were a mix of allied forces, and the ambushers represented my usual image-nation of Schoeffen-Buschhagen.

The convoy had an escort of two cavalry, four infantry and an artillery unit, and the ambushers had a light cavalry unit, two light infantry units, and two line infantry units.  I elected to deploy three of my four units in a blocking position near the bridge, with the cavalry and one light infantry further forward to harass the convoy as it advanced.

Things started well enough for me.  Ross led off with a unit of allied hussars, who were readily put to flight by the Schoeffen-Buschhagen hussars, who appeared out of some dead ground around the middle of the table. 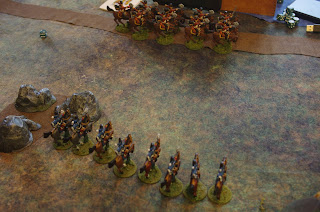 After that, however, things became more difficult.  Ross carefully advanced the wagons behind a screen of his line infantry, and covered the tail of the convoy with his gun and a squadron of dragoons.  My forward light infantry were reluctant to advance out of covered position in some woods onto open ground in the face of the dragoons, and my hussars were clearly outmatched as well and hung back.


That left the fight in the front, where Ross's allied infantry pressed ahead and engaged in a close range firefight with the blocking S-B infantry.  After a deadly exchange of fire, the remaining S-B forces were now outnumbered significantly by the allies, and their commander prudently elected to break off and hope for better luck on a different day.

After some technical difficulties in getting started, the battle took about three hours, which was a pleasant diversion for a Saturday afternoon.

I was reminded how much I enjoy seeing the big guys on the table, so perhaps it is time to get a few more painted.  It does look, however, like I am going to be limited to 4x6 or smaller tables for home games for the foreseeable future, so there probably needs to be some reconsideration of the upper limits of the project given the numbers that can be maneuvered.

For some variety I recently acquired Howard Whitehouse and Dan Foley's new book A Gentleman's War, which contemplates 12 man infantry and 6 man cavalry units, and has rules covering the mid-1700s up through the later 19th century, and should therefore be suitable for use with these figures.  I shall hope to post a full review sometime soon, after a game.