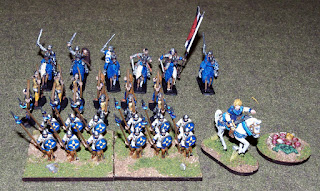 Over on the Reaper Miniatures forums, this weekend was designated for a paint binge challenge. It seemed like a good time for it, so this is what I did.
Posted by Rob Dean at 6:50 AM 2 comments:

Back around 1990, I had the opportunity to pick up about 8 packs (48 figures) of Ral Partha elves from their 1976 Wizards, Warriors and Warlocks range. These figures were some of the first that Tom Meier sculpted for Ral Partha, and I've always felt that they had a certain rustic charm, as well as matching the general style of a lot of the other early figures in my collection better than the beautiful highly polished Collector Series elves that he sculpted just a few years later.  I've always wanted more of them, and I recently successfully petitioned Iron Wind Metals to remold these.  My brother and I are starting some planning to do a Battle of the Five Armies scenario next year,  to cap our fatnasy revival project, and I now have the army of the elf king.