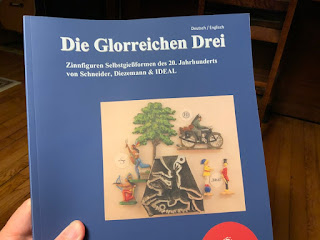 I really should know better than this, but I realized the other day that I might have more luck in finding some information on Schneider molds if I Googled in German.  (“Schneider Giessformen” …) In the process I discovered that this book was available through Amazon.  Since it is a print-on-demand, it came promptly, and even has a text (in smaller print) in English following the German.  I’m still absorbing it, but there is more information (and more molds…) out there than I had imagined. 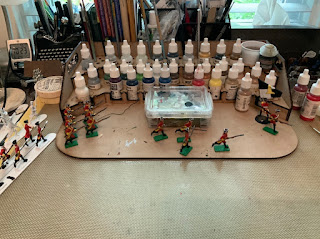 Prompted by last week’s Not Quite Seven Years War game, I decided to return to the painting table, and dug out a partially completed unit I started working on sometime last year.  All the way back in 2011 (??!?) we acquired someone else’s partial imagi-nations project.  Most of the units have been rounded out, but there are still some partial units that have never been regularized and brough to the tabletop. These red coated troops will be a second regiment of infantry (or part of one, at least…) of the Archbishopric of Schluesselbrett when completed.

I decided to take a break from keeping up the blog earlier this year, and, if truth be told, I haven’t done much in the last few months that was particularly interesting. However, elder son Norman and I met yesterday to play a few games in his new basement gaming space. By his request, I brought down the Not Quite Seven Years War troops.  As is customary when  playing with just our own collection, though, the battle is set in the somewhat earlier War of the Western League (174x), rather than the actual NQSYW (175x).  All of last year’s NQSYW games were played with smaller units, using A Gentleman’s War or With MacDuff to the Frontier.  For this game, we returned to Charge! despite the limitation of using a 5x6 table. (I will note that Norman’s basement is big enough to deploy a 6x10 table, should we have four folding banquet tables available.)

I chose the scenario from C.S. Grant’s Scenarios for Wargames, as usual.  I have been gradually working through the ones that we have not yet tried, and I settle on scenario 20, “Reserve Demolition”.  This bears some resemblance to the Battle of Sittangbad in Charge!, although the actual Sittangbad scenario is more closely captured by Scenario 8 in Scenarios for All Ages, “The Vital Bridgehead”.  We used the usual proportions for scaling a C.S. Grant scenario to our 40s; about 2 scenario units per Charge! regiment.

(North at the bottom of the overall picture below) 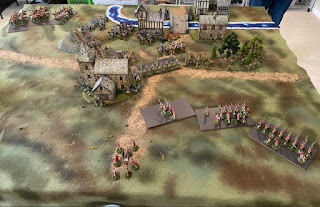 With the only sappers readily available to us being those of Schoeffen-Buschhagen, that cast the Pragmatic Coalition (S-B and Wachovia) in the role of the defender, attempting to withdraw their forces and demolish the bridge, and the Western League (Hesse-Hattemstadt, Schluesselbrett, and Saxe-Wiolenz) as the attackers.  Given that the last battle we saw in the War of the Western League resulted in a Coalition victory, forcing a river line on the road to Schluesselbrett, it would seem that the League forces managed a counterattack.
In accordance with the scenario book and the rules, we chose a 16 turn day, and diced for the arrival times of two approaching League columns.  As it happened, the first League column, composed entirely of native Schluessebrett troops, did not arrive on the scene until late morning (turn 6), about the same time that the sappers informed the local commander that the demolitions were in readiness.
The first column was compelled to deploy under a galling fire from the small village at the crossroads, garrisoned by a detachment of converged S-B grenadiers, the Wachovian light infantry posted in the small wooded area west of the crossroads, and a battery of Wachovian artillery.  The cavalry swept around the defensive perimeter set up by the coalition, looking for a weakness. 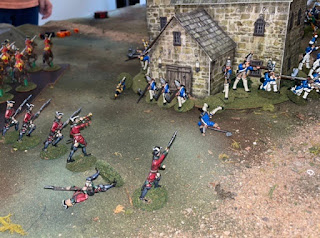 A freshly raised detachment of Schluesselbrett light infantry attempted to bring the village under fire, but were soon compelled to withdraw by heavy fire from the grenadiers.
The attacking infantry regiment was also quickly forced to withdraw.
On the eastern flank of the Coalition perimeter the colonel of the Schluesselbrett dragoon regiment thought that he observed a gap in the Coalition defenses, and order his leading squadron to attack. 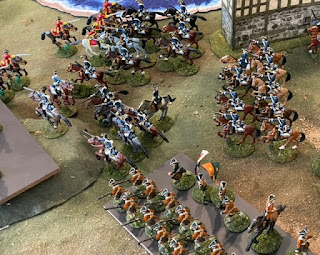 However, the S-B Prince’s Dragoon Guards were ready for them, and sounded the bugles for a charge of their own.  The typical sprawling cavalry melee, of charge and countercharge, with battered squadrons retiring to rally followed.  Fate (or skill) was not with the red-coats that day, as each of their attacks was thrown back in disorder by the Guards.
As the cavalry battle developed, the Coalition commander (a Wachovian, it might be noted) took advantage of the lull in the western zone of the battlefield to begin withdrawing some of his forces.
Soon (~turn 9) the lagging second column of the League began to arrive by the eastern road, and started to push in the Coalition defenses.  The stolid Wachovian infantry and the S-B grenadiers held firm, but more League troops continued to arrive.  Clearly, this second column represented the main effort. 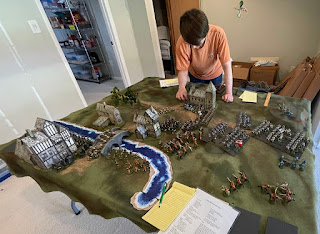 It was now time to sound the retreat. 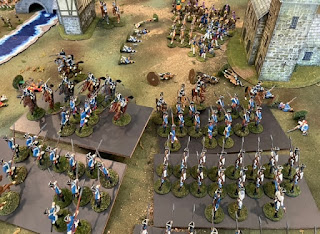 However, as the remaining Wachovians formed up to cross the bridge, covered by the battered grenadiers, a squadron of League cavalry appeared from around the village and swept down on the infantry. 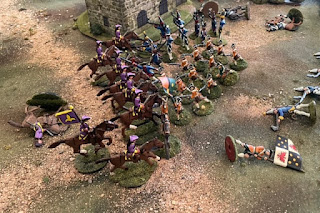 Seeing little chance that the remaining infantry could extricate themselves from the desperate fight in which they now found themselves, and with the League infantry pushing in steadily from the east, the Wachovian commander ordered the fuses to be lit on the bridge demolition charges.
With a tremendous explosion, the span of the bridge collapsed into the river, leaving the remaining S-B cavalry and grenadiers (as well as some of the Wachovian infantry) on the north (enemy) side of the river. Casualties were heavy on the Coalition side, but history records the action at Gaithersbruck as a Coalition victory, albeit a somewhat Pyrrhic one.
There were probably stern letters exchanged between the higher commanders of the Coalition force, about the fact that the majority of the troops safely withdrawn were Wachovian, while the Schoeffen-Buschhagen elite troops were sacrificed in the rear guard action, but history records that the Coalition did not splinter over this incident.
It was good to get Charge! back on the table after a hiatus.  We were done by turn 14, having actually started at turn 6, so had nine turns of actual play, not unusual in our experience of the game.
Once we had that cleaned up, we played a couple of shorter games. 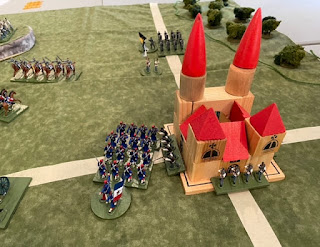 Norman pulled out his growing collection of 1/72 scale 19th century imagi-nations figures and we played the small battle scenario from Neil Thomas’s Wargaming Nineteenth Century Europe using the rules from the book.  Then we finished up for the day with a quick Bronze Age DBA game.
Over on the Tradgardland blog there has been discussion of old Schneider molds lately.  My other activity for the weekend was to try casting some of the ones I’ve acquired this past year.  It was a cool windy day, thouigh, so keeping the molds warm was difficult, and things weren’t too successful, unless you need a pine forest: I hope the gun will work on a better day, as well as this interesting mold I have on an 18th century lady on horseback: 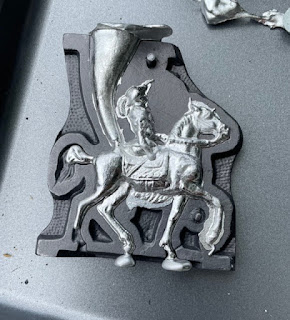 I hope the next post will be sooner than six months from now.