The weather on the east coast of the US has been cold all week, so I didn't end up walking for exercise during my lunch break, although it would have been good for me. Instead, I took the opportunity to break out my small painting box (about 20 colors and two sizes of brushes). I posted the first batch of figures previously, the skirmishers for Dux Bellorum. Unfortunately, this has not been a good week for being organized in the morning, so I didn't have any more of the Dux Bellorum figures stowed at my desk.

Therefore, I broke out what I did have. This first figure (and I apologize for the close cropped shot making it appear a little fuzzy) is one of the ten poses of elves from the Caesar fantasy range (now apparently out of production, temporarily, I hope). He didn't take my entire lunch period to complete, so I also added some paint to a 28(+)mm Reaper Bones fighter, still unfinished.

The next day, frustrated by the Bones figure, I decided to grab something else from my stash, and came up with this pair. The lutenist on the left is from the Linear-B Age of Tudors set. He's likely to be dropped into a game as a D&D-style bard. The figure on the right is from the Red Box War of the Roses Irish troops set. I think the galloglasses from that set have a great "fantasy" look to them, even though they are pretty historically correct.

As far as D&D goes, I could use these two as representations of two of my original game's player characters...there's probably a scenario seed in there somewhere.

I'm finishing a few Caesar skeletons and basing all of these this morning, so perhaps there will be pictures of the whole lot later this weekend.

I had a quiet lunch break yesterday, so I pulled out a stick of home cast archers, destined to be a skirmisher stand for the Dux Bellorum project. Start to finish took an hour, so I wasn't using refined paint techniques on these rather rough castings. They still shouldn't look too bad when fully based.
Posted by Rob Dean at 8:20 AM 2 comments:

Solo Games for the New Year

I was a little short on games played last year, and hope to do better in 2015. I particularly hope to bring out and play with some of the projects that have been languishing in storage for an extended period of time. Therefore, I am
determined to play a few more solo games.

My first solo game of the year turned out to be on the 4th of January. William and I played a quick fantasy skirmish using Song of Blades and Heroes on the 3rd, and had intended to play it again. We ran out of time, though, before we needed to go out for the evening, and I needed to take him back to school the next day. I'm an early riser, so I decided I would do a quick reprise of the previous day's game to see if the entourage of the evil wizard could have done any better. As it turned out the second time, the defenders of Willstown managed to lose their leader, and that was enough to allow the entourage the victory. Let that serve as a reminder to use the leader to lead and not to fight...

I cleared the table, flipped over the ground cloth to the tan side, and dug out several boxes of scenery from my Darkest Africa project. This had most recently been out for Cold Wars in 2011, and I thought that it was high time that I put it on the table. I usually use these The Sword and the Flame, or, to be more accurate, the Sword in Africa variant from the 20th anniversary edition of the rules. I haven't played TSATF in a few years either, so I'm getting a bit rusty.

I wasn't sure if a 3x3 table would give a long enough game. The scenario involved a trading post (at the left) under attack by some Zanzibari Arabs and their native allies. I gave the Zanzibaris 5 bands of 8-9 men each, with one band with rifles posted in the jungle area in the top of the picture, one with muskets in the lower right jungle area, and three bands of natives, each with a mix of spears and muskets facing the path. The British had two bands of 8 plus a few noncombatants in the compund, and a rescue column of one band of askari constabulary and two bands of mixed askaris and bearers.

The Zanzibari musketeers can be seen here, from the direction of the compound.

Seen from this angle, the group to the right of the angle faced the Zanzibari riflemen, and those beyond the building at the left faced the muskets.

The first couple of turns consisted of the rescue force attempting to move up the track toward the compound, led by the native constabulary. Unfortunately, they fared poorly in an attack by one of the native bands, and Lieutenant Harland-White was slain by a native spearman (despite having a character's +2 on the die roll). The remants of the constabulary fled, although they did account for 6 of the 8 natives in the band that attacked them.

That left two bands of askaris and bearers to attempt to force their way up the path against two bands of natives. Outnumbered in fighters by two to one, this was clearly a hopeless task, and the last bearers fled after dropping their loads on turn 6 or 7.

Since I was playing both sides and needed to clean the game up today, I decided that the natives, lent confidence by their easy victory over the rescue force, would attempt to attack the compound. As expected, the die roll modifiers for attacking defended barricades made that quite difficult, and they were repulsed with heavy losses. Their Zanzibari masters were more prudent, and continued to snipe, with limited effect, from covered positions.

Inside the compound, a few casualties had been sustained as a result of the rifle fire, and one askari was slain by a spearman during the assault, but their situation was by no means desperate. So, as evening fell in the Valley of Shadows, the siege continued...

Overall, I'd count this as a marginal Zanzibari victory; defeating the rescue force was an accomplishment, but sniping at the compound was generally to the advantage of the defenders (as expected from the combat charts), and whether it could be overrun on another day was by no means certain.

I now need to go back and read some of the online commentary about the rules; there are a few fine points about the Sword in Africa variant that I'm not sure I played correctly. However, one of the advantages of the solo format is that the opponent seldom disagrees about rules interpretations.

All in all, it was an interesting little game, running about an hour and a half and ten turns. Next time, I'll set the small table up in my den, where it can be left indefinitely.
Posted by Rob Dean at 5:05 PM No comments:

Song of Blades and Heroes 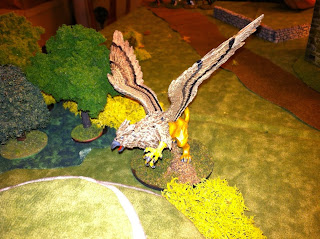 We inaugurated the year with a quick game of SBH today, with the usual deadly human warband enhanced with a griffin, and faced by the retinue of the evil wizard, orcs, an ogre, and some magical things. The humans were as tough as ever...
Posted by Rob Dean at 3:40 PM No comments: