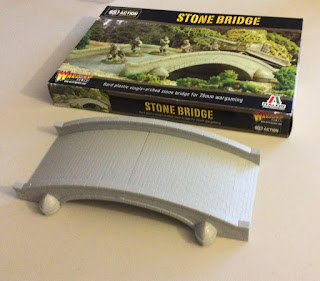 As I have been working on my 25mm fantasy lately, I realized that I had disposed of my Hovels or Gallia resin bridges during a previous purge. I went looking for easily available replacements, and turned up this hard plastic kit from Italeri, available online for about $15. This bridge came in six pieces and went together quickly with no serious fit issues. The roadway is just over three inches (~75mm) wide, so will easily fit my 60mm width mass fantasy bases. I may end up with another one or two for flexibility in scenario design. On to painting ...
Posted by Rob Dean at 7:58 AM 1 comment:

For Janus: Looking ahead and back

2015 was an interesting year for wargaming, at least for me.  I started the year intending to work on 1/72 scale plastic ancients and homecast Dux Bellorum warbands, as well as finishing off the Portable Fantasy Game (PFG) skirmish project. I got off to a good start toward those goals, but, as usual, no plan survived contact with reality.

My Bones 2 Kickstarter package arrived with a ton of fantasy plastic, and the PFG completion got sidetracked while I quickly painted up a Bones undead warband, using some of the new Bones 2 figures.

However, the vast mass of Bones 2 was a little overwhelming, and the limitations of the material are becoming more apparent as I continue to paint and play with them.  One of them is that spindly parts are going to be a problem, and the Bones 2 cavalry and centaurs are not very satisfactory.  Reaper apparently agrees; there were no new cavalry figures in the Bones 3 Kickstarter. Figures suitable for arranging in units remain scarce in the line, so my notion of building new fantasy forces in modern (i.e. BIG) 28mm for mid-sized games, say 120 figures per side, is not working out.  So big plastic fantasy is headed toward the back burner, with a few minor exceptions I'll get to.

The next unplanned shift in emphasis came in March, when my long-time friend and fellow gamer from back in the day, Joe, came out to the East Coast for Cold Wars.  With a little encouragement from Joe, I ended up coming home with about twenty vintage 25mm fantasy figures from McEwan, Custom Cast, Minifigs, and Ral Partha for the nostalgia value.  That got me looking through my old fantasy figures.  Added to my issues with the Bones, I started looking around on eBay for figures I had once had, then figures I had once wanted, then figures that I might have wanted had I ever seen them or heard of the company that had once produced them....Somewhere in the middle of that exercise, which, by the way, was reinforced by my brother deciding to do the same thing, Ironwind Metals decided to revive some of the classic Ral Partha fantasy army lines and the old Chaos Wars rules.  I bought into that Kickstarter in May, and it happily delivered right on time at the end of the year.

At Huzzah, in May, I picked up a lot of reinforcements for my 25mm Byzantine/fantasy armies, mostly Hinchliffe with a smattering of Minifigs. That was the first "new" army I picked up this year.  I also got Aquilonians and Turanians (old Ral Partha Royal Armies of the Hyborean Age) from Classic Miniatures, and the Ral Partha Kickstarter elves and orcs.

I have mostly sworn off Kickstarters, with exceptions made only for established companies, or companies whose previous Kickstarters went well. In 2015, that meant that I signed up for three, Bones 3, the Ral Partha Chaos Wars, and Stonehaven Halflings.  All of them have either delivered or are on schedule, so that's been going well, except for the amount of painting stacking up, of course.

With all of this going on, I have been attempting to pick up the pace on army painting.  The thought that I had at the beginning of the year, that I might spend more time on painting some superior (not Superior, though I got some of those this year too) miniatures has been overtaken by the press of the amount of work I've taken on.  The good news is that it has been an excellent year for painting, with 205 25/28mm figures (and 27 1/72 scale plastic figures) completed.  The bad news is that I am going to need to reach toward some previous records (achieved back in the early oughts) if I want to see these armies on the table anytime soon. I also need to seriously up my game on the painting of horses, because I've got a lot of cavalry to paint.

It was a pretty good year for conventions; I made it to Cold Wars, Huzzah, and Gencon, and took games to all three.  I had friends at all three, which made each of them a good experience, and I am looking forward to doing at least as well next year.

I was involved in 33 miniatures games, which is a little below where I want to be.  With both sons out of the house, though, pickup games aren't as easy as they have been in years past.  Ross and I got in a couple of remote games this year, but technical issues have been keeping us from doing more. I hope to fix that in the coming year.  As might be expected, the 33 games included a lot of fantasy.  We played multiple games with four sets of rules, Chaos Wars, Frostgrave, Song of Blades and Heroes, and our home rules under development.  We also had single games of a couple of others.  There was still some time for historicals; we played several games of Warhammer Ancient Battles leading up to running it at Cold Wars, and several Charge! games with the Not Quite Seven Years War figures, leading up to Huzzah.

As far as games and rules went, that mix made it a fairly typical year, with just a couple of exceptions.

One was Osprey's release of Frostgrave, and several of my fellow HAWKs members immediately jumped on the bandwagon.  Since it uses warbands of no more than 10 figures, it was pretty easy to get a team on the table by simply reaching into the box of finished Bones.  In 2016, I want to line up a purpose built faction with appropriately themed basing, and see if I can get it painted in small batches in between 25mm fantasy. It will be mostly Bones, with a few other Reaper metal figures to round out a couple of figure types that are a little scarce in Bones.  I've also started my own set of paper model-based scenery so that I can run it at home.  My older son has also started working on a Frostgrave band, so there are some family games in the future. I don't usually buy into these small specialized sorts of games, but it seems to me that most of this can be easily recycled into something else if everyone gets tired of it. I'll try to post more on Frostgrave in the near future.

The second was also an Osprey release, Dragon Rampant, right at the end of the year.  A couple of the other HAWKs have been talking about trying its medieval precursor, Lion Rampant, but haven't yet done so because they are still working on figures.  Translate that concept to fantasy and, behold!, I have troops for a dozen warbands/retinues immediately at my fingertips.  So that allowed me to throw a game on the table (as described in my Christmas trip report) even before my pre-ordered hardcopy of the rules caught up with me, which is not at all my usual experience in testing something new.  I expect to be playing more Dragon Rampant in 2016, since it makes use of stuff that's already in place.

For 2016, I have already mentioned that I want to work on getting the 25mm fantasy armies painted.  After spending much of the past year stripping paint from eBay purchases, I am looking forward to working with figures that haven't been painted previously.  Beyond that, I want to get back to building the Dux Bellorum warbands with the homecast figures, partly just because I am interested in the period (thanks, Rosemary Sutcliff), and partly to take the opportunity to practice my conversion skills on small scale figures, using ones that are cheap and easily recycled in the event of any unfortunate occurrences.  I also want to get back to working, even if only gradually, on some NQSYW figures again.  I have been working toward a project goal for many years without yet reaching it, and I hope that running some NQSYW games will provide the necessary inspiration.  There is also some chance that this will be the year that I do some more with the 40mm Renaissance figures.

One final observation: much of the last third of the year was a little stressful at work.  I was interested to see that the way this played out in my hobby was to get me painting more in my available time, because painting was a complete break from the sort of thing I was doing at work.  Setting up scenarios and doing army list calculations seemed way too much like work for it to be relaxing, which contributed to the fact that relatively few games got played post-Gencon, right up until work things got finished, just at Christmas.  If a lower stress level at work were to translate into less painting and more playing next year, I think I would be at peace with that.

My 2015 retrospective will need to wait for another day; I ended up spending 9 hours yesterday on doing this Chaos Wars unit for Ironwind Metals. I volunteered to paint three at Gencon, and it's high time that got done. The whole effort took my from 9:30 to 6:30, but there was a lunch break and a couple of stretch/coffee breaks in there, too. Norman came up today and we played a trial of Frostgrave; more on that later, too.
Posted by Rob Dean at 6:38 PM 2 comments: