As Historicon approaches, we had a work session with Duncan on Sunday.  I didn't get any pictures due to the nature of the work and a little technical glitch with my camera, but we finished the saw work on the trench sections, cut battery bases for the besiegers, and fired up the melting pot for some additional gun crews (another 40 or so gunners) and guns (four more Meisterzinn siege guns, for a total now of 12, and another mortar, just in case...).

Yesterday being a holiday, we sanded the trench sections, cut the felt on the glacis, and painted the fortress stonework in a basic brown.

It's been a hectic week, with a conference I was responsible for planning at work, Norman's graduation, and a visit from my mother. I was doubly pleased to get home tonight, as tomorrow is one of my scheduled off days, so I've got four days at home to get a few things done.
I sanded the edges of the luaun glacis support pieces after supper, and then enlisted Norman (the Prince Palatine) to assist me in gluing the foam sections on.  With this completed, we can start gluing down the covering felt, a process which will probably take a couple of days, as I usually stretch the felt and glue it a section at a time.

With six weeks left to go until the convention, there is not a moment to lose...
Posted by Rob Dean at 10:29 PM 3 comments: 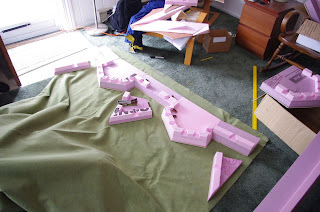 Following our productive session on the fort and related projects on Saturday, we returned for additional work on Sunday.  I am developing additional confidence with the Hot Wire Foam Factory equipment; using the jigs provided by Duncan, I cut all the embrasures we need.  The fort walls and ravelins with embrasures can be seen set up in my rather cramped parlor.  The next step is to glue the glacis segments together, and then cover them in felt. 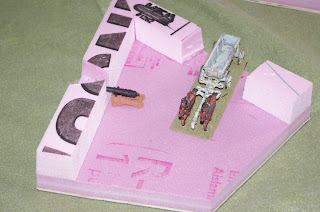 Here a Meisterzinn wagon is being used to check the dimensions of the cutaway entrance in the ravelin, leading to the gate.  For scenarios with the siege in full swing, I intend to block this with a plug in piece composed of gabions and possibly including other hasty barrier materials. 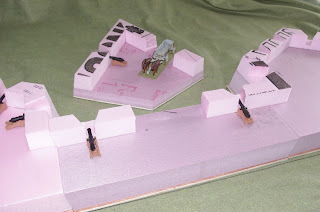 Here's a view from farther back, with the wall section cut to accept the gatehouse structure, and some Barzso cannons emplaced to check the embrasure size. 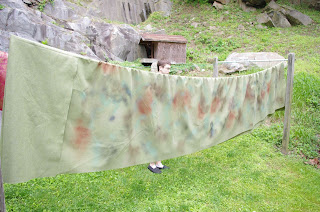 We acquired a 6 yard piece of olive felt for this project.  2 yards is earmarked for grass over the glacis, and the remainder will form the main groundcloth.  I like to start with some spray paint on the felt to break up the uniformity. 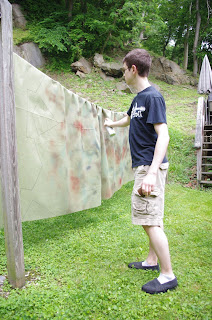 I enlisted William's artistic assistance in this project.  If you click on the picture above, you should be able to see the placement guidelines for the fortress elements drawn on to the felt. 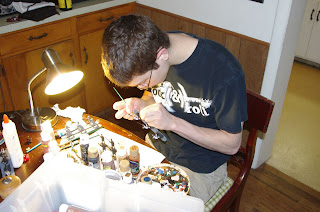 Inspired by all of this effort, William has been working on adding another company to his army...
Posted by Rob Dean at 10:03 PM No comments: 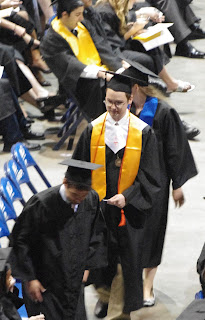 We enter a period of transitions here.  My elder son (aka the Prince Palatine of Wachovia) graduated from college yesterday, and is spending some time at home.  I found my dining room table covered with painting equipment today, so I'll be turning his attention to the fortress of Adelheim in the very near future.
Posted by Rob Dean at 9:50 PM No comments: 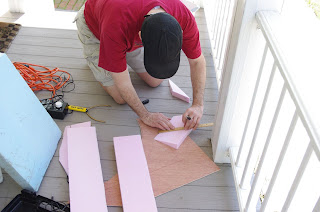 After a couple of weeks of things going on outside gaming, and weather too bad to take work outside, a nice day and a weekend finally lined up yesterday.  Unfortunately, it was the day that I was supposed to be cleaning the house in anticipation of a visit by my mother, whose sympathy for toy soldier clutter remains limited after forty years...but I'll deal with that today.

I was able to cut the glacis sections yesterday. 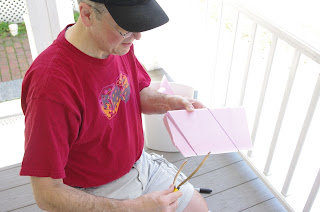 After marking and measuring I was able to freehand the cuts using a Hot Wire Foam Factory tool lent by Don Hogge, another of the HAWKs.  Some irregularity in the final product is acceptable on these glacis segments; everything will be covered in felt except the rear vertical side, to be painted as a retaining wall. 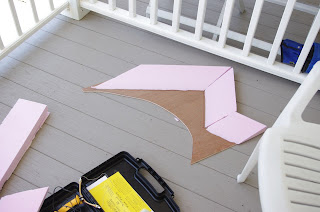 We got to the hardware store for supplies, glue and spray paint for the most part, and I had hoped to spray texture the felt.  However, the weather was holding, and I thought it prudent to see if we could make some of the siege artillery.

We cast several mortars, both from a Meisterzinn mold and a Prince August mold, and four large cannons from Meisterzinn.  I had a problem with that; there is a small metal key in the Meisterzinn mold, which separates the "dolphins" on top of the gun barrel...and plugs a hole in the side of the mold.  I managed to break it on the first casting, while extracting the sprue from the mold.  It was clearly brittle, snapping into three pieces.  We plugged the hole with a binder clip and continued casting, but those later gun barrels are going to need some extra file work.  In the long run, I suppose I could fabricate something from heavy sheet brass to replace it, but after this game is done, it's unlikely that I'd ever need more of them, so it may be file work for any future uses...
Posted by Rob Dean at 7:31 AM 4 comments: 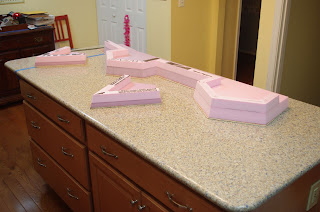 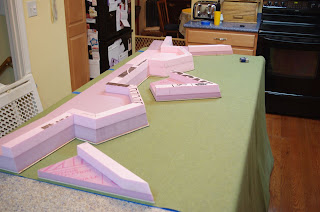 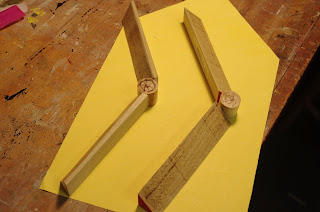