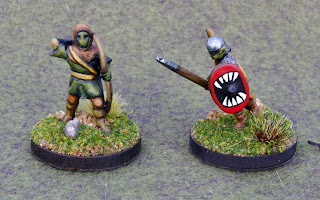 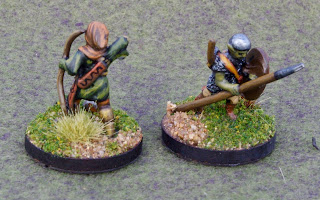 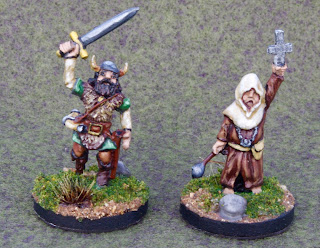 After taking a year off from Huzzah in 2016 (for my son's college graduation), I made the trip again this year.

Huzzah takes place in Portland, Maine, at a hotel near the airport, which makes flying very practical.  This year my significant other was up for a road trip and some shopping at the nearby L.L. Bean outlet, so I was able to pack my 40mm Renaissance figures to be half of a game run with my long-time collaborator Ross Macfarlane.  In some future year, though, I may find myself limited to staging a game that is air-transportable, but that's a topic for a different post.

The general stress of life has been a little high this year, so I was fortunate that Ross was up to the task of doing most of the planning for our game, as well as acting as the convention liaison for the contingent of HAWKs who came up for the weekend.  As the convention approached, I have been working on something else entirely (1/72 fantasy), so Ross dipped into his vast collection of miniatures and came up with a 1/72 Hordes of the Things army so that we'd have an alternative pick up game.

Irene and I reached Portland on Thursday evening after an uneventful drive.  Official gaming at Huzzah starts after lunch on Friday, so there was a little time to relax and make ready.  When Ross arrived, we grabbed a table for a quick review game of the 40mm Renaissance rules we use, and then moved on to our first official game.

We were both in a 54mm English Civil War game, using plastic figures from A Call to Arms and the Very Civile Actions rules from The Perfect Captain.  The gamemaster, Jeff Estabrook, had chosen the Battle of Brentford, immediately after Edgehill at the beginning of the war, as the basis of his scenario, and we had a good game of pushing around pike blocks.  I used to do ECW in 25mm, but sold them off some years ago, figuring that one pike and shot project (40mm 16th century) was probably enough.  I think I'll maintain that resolve, but I was reminded that I like the toy soldier feel of gaming with the big figures.

Ross and I set up our game in the after-supper time block.  We used a generic scenario drawn from the Stuart Asquith book on solo wargaming, which we set in the 1544 Boulogne campaign, part of Henry VIII's second French war, and which is more or less the default time frame for our troop collections.  The scenario involved two forces on converging paths, each tasked with holding a village and exiting troops off a single road on the far side of the field.  Our forces were somewhat asymmetrical, with the French being heavier, and the English (and allies) being superior in firepower.  I thought the game went well, with all of the players remaining actively engaged right up to the end at the four hour mark.  The French were edged out of the village and blocked from exiting, but it was a near run thing in both cases.

Ross ran an impromptu demonstration of Bob Cordery's Portable Wargame rules in the Saturday morning block, and I had a go at evicting the British from Zululand a couple of times, using an eclectic mix of 54mm troops from Ross's collection.  Forces ranged from A Call to Arms plastic Zulus to 80 year old vintage Britains, recently restored and repainted.  I already have a copy of The Portable Wargame, so happily I'm ready to try this at home, perhaps using some troops that haven't been out in a while.

On Saturday afternoon, local gamer Rob Wheeler (who does business as Pennyfew Painting) stopped in to deliver some commissions and to play a couple of rounds of Dragon Rampant.  His war band was composed primarily of vintage Ral Partha figures, and I fielded two different bands, one of mostly Ral Partha figures, "The Masters of Lizards", and one entirely of early Heritage figures, "Forest Defenders". They were equally unsuccessful, so I will be looking for some revenge at a future convention...

I had not preregistered for anything for the convention (see comment regarding life stress above), so the Saturday evening games were pretty much closed out.  Therefore Ross, Irene, and I had an unhurried dinner at a steak place across the street, and then came back to set up a pickup game of Hordes of the Things, using the 1/72 scale plastics we had brought.  Once again, my skills were wholly inadequate to the situation at hand, and my army was sent packing with a 6:1 loss ratio by Ross's barbarians (built from a mix of Revell Saxons, Orion Vikings, and the classic Airfix Ancient Britons).

Ross did a reprise of the Portable Wargame on Sunday morning, so I had a quick session using Russian Civil War figures against fellow HAWK Duncan Adams, before heading out for the long drive home.

Huzzah remains a great local convention.  I was glad to be back this year, and look forward to attending again next year, although I might be a little more proactive about registering for games in advance. 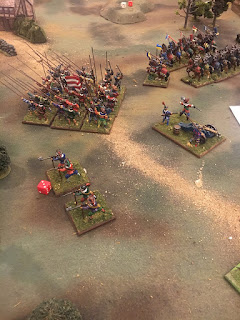 Ross and I are running a 40mm 16th century game this evening at Huzzah.
Posted by Rob Dean at 8:56 PM No comments: 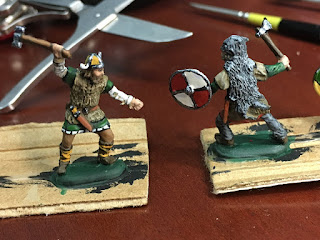 I'm continuing to chip away at the Hordes of the Things fantasy Viking-type army for the campaign, with 2 more war band figures finished up at lunch yesterday.
Posted by Rob Dean at 11:05 AM 1 comment: