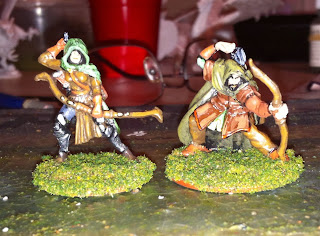 We'll see if I finish anything else today. These two are intended to address a gap in my Song of Blades and Heroes human warband identified last game: I had no ranged weapons.

Some weeks ago we ran a Not Quite Seven Years War game with Ross Macfarlane remoted in...since my battle report continues to be delayed, I thought I'd just go ahead and post a few pictures.

Battle reports are here and here.

Putting the table next to the window in the morning makes photography a little interesting...

Here the Coalition army, Schoeffen-Buschhagen and Wachovia, enter at the left, while the Northern Alliance force enters from the right.

The battle opened with a clash of dragoons, S-B versus Schluesselbrett, in the center of the field.

The Alliance attempted to outflank to their left, but ran into additional Coalition cavalry, which they eventually defeated after an extended series of charges and melees.

One of those melees...

On the Alliance right, their infantry stood off a desperate charge by the Szathmari Hussars.

But eventually Alliance troops moved to occupy the town.

Remnants of the Prince's Dragoon Guards duel with the remaining Schluesselbrett dragoons, breaking them. It was, however, too late for the Coalition, and they executed an orderly withdrawal to await better circumstances.

In anticipation of a holiday revival game, the kids helped me paint a few Bones for characters we'll be using. I finished the Bathalian on the left while we were at at, but the other three, left to right, were done by me, Norman, and William, respectively, all start to finish since last night.