Rehabilitated Minifig Wolves, and an Elf

I mentioned earlier that I had started posting picture of old miniatures to the Reaper forum. I have three wolves from the Minifigs Mythical Earth range, ca. 1974. All of them had a very undistinguished ancient paint job on them, and none had seen play for a long, long time. (The original goblin riders, sold separately, have been lost in the mists of time...)

As I thought about the idea of putting on a game to show off the old figures, it became clear to me that it would be respectful if I could at least try to make them look a little better. So, I quickly stripped the old paint, pulled up a good timber wolf picture from the net, and went to work. Just adding some real wolf coloration helped considerably, although the noses remain strangely long. I finished the basing last night, and put on the final varnish this morning.

The wolves are seen here with another repaint, an early Ral Partha Wizards, Warriors and Warlocks range wood elf. Despite the case of macrocephaly, these remain among my favorite early fantasy figures. I tried to do this one nicely, with the traditional green cloak of the rest of my wood elves, but with the white tunic in an effort to brighten up the whole presentation a bit.

I mentioned the retrospective pictures I've been posting to the Reaper forums in the previous posting. Here's what I've been working on this week, now completed. The two fighters are both from my Cold Wars shopping; the sorceress has been sitting around in a box of unpainted older stuff for a long time.

The fighter on the left is a dismounted knight from the Ral Partha All Things Dark and Dangerous line (02-915), sculpted by Julie Guthrie around 1982. The fellow in the middle was seen earlier, in progress, and is a Tom Meier sculpt from about 1977, "Foregum", catalog number ES-24. On the right is another Meier sculpt from about the same time, ES-29, a sorceress.

These are now slated to join my latest brainstorm, the Aurora Project, a fantasy game to be run entirely with early miniatures...


I have posted about painting the Reaper Bones for my fantasy skirmish game and roleplaying game use. I participate lightly in the Reaper Forums, and ended up starting a thread displaying old fantasy miniatures from my collection recently.

I am embarrassed by my delayed Cold Wars report, but one of the reasons that old miniatures have been on my mind is that I picked up a handful of antiques from Harmony House Hobbies at the convention, and have been wondering what to do with them.

Added to this is the announcement from Iron Wind Metals that they are reviving production of the Fantasy Collector series of early Ral Partha fantasy army figures. An idea is beginning to gel, about a retro-style fantasy project, which would supplement my existing old fantasy armies, and cross over with an itch to do a medium sized medieval game (something along the lines of Lion Rampant--and if I don't end up liking it, it's the same ballpark in army size as Knights and Magick, which my brother wants to work on.)

The net result is that I spent my lunch break on Monday and Tuesday thinking about this while working up this fellow:

He's part of the Cold Wars find, an old Ral Partha ES-24. If anybody has any old Partha ES range around they don't want, contact me...

Here are those Saxons based up:

I also finished off a zombie ogre from the recently delivered Bones II Kickstarter, to continue with the undead warband for Song of Blades and Heroes I seem to be working on...

Not one of my best efforts, perhaps, but at least it's finished. Time for a game with those guys soon... 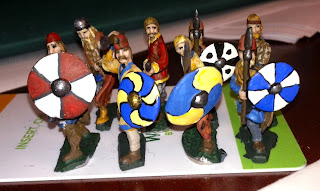 A quiet lunch break today allowed me to finish painting the next batch of eight home cast figures (Dutkins and Prince August) to serve as an ordinary shieldwall or warband in my Dux Bellorum project.
Posted by Rob Dean at 1:29 PM 2 comments: