Not Quite Seven Years War 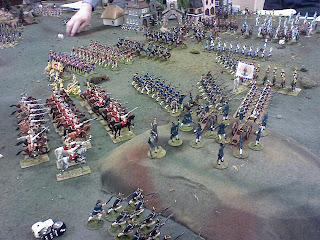 It is difficult for me to remember back to the beginning of the Not Quite Seven Years War. Around 1991, I ran across the Prince August 40mm semi-flat “Irish Wild Geese” molds in a local hobby outlet, while shopping for Prince August fantasy molds for a (quite) different project. I had recently started reading MWAN and had run across references to Charge! projects encouraged by the Seven Years War Association. I considered the positives -- inexpensive figures from casting, both sides from one set of molds, bigger than 25mm -- and I considered my new son in his stroller with visions of playing games with him someday, and bought the molds. I expanded fairly rapidly from a few test molds to a set including horse, foot, and guns, with frills like command figures and limbers. I also acquired my own copy of Charge! in the Athena reprint edition. However, under the pressure of other projects, and of adding a second son to the family’s order of battle, things stalled after producing a few sample units.
The formation of the HAWKs occasioned the next burst of activity. Chris Palmer (Gaslight, Look Sarge, No Charts, etc.) was also a homecasting enthusiast, and had a great project going on with the other set of 40mm 18th century molds, for the French and Indian War using the Nuernberger Meisterzinn multi-part molds. One of the main attractions of a club is the opportunity for contagious enthusiasms, and it didn’t take long for Chris and I to start adding units to each others’ project. The presence of an opposing force brought the opportunity for gaming within reach, and on a fateful day in 1995, the opening shots of the Not Quite Seven Years War were fired.
The first skirmish, dubbed the Battle of the Tollbooth, was quite modest. As per the original plan, Charge! was used for the rules, although, as has often been the case since, we used the company/squadron as the basic unit, rather than the regiment. My forces, representing the Kingdom of Schoeffen-Buschhagen, consisted of one squadron of cavalry, two and a half infantry companies, and a gun, while Chris, whose forces were yet to be named as “North Polenbergers”, had a squadron, two companies, and two guns. Luckily for me, we hadn’t yet become familiar with the subtleties of the Charge! rules and I avoided most of the effects of the artillery disparity when Chris kept moving his guns. (A gun in Charge! is considerably more powerful than a company of infantry.)
The Battle of the Tollbooth was followed by several years of intermittent games at home and creation of new units. Interest among other club members resulted in the expansion of the war to new countries, most represented by just a handful of units. The total force available became large enough by 1999 that we tried a campaign, which produced a few interesting battles but eventually stalled as the referee (me) became unable to keep up with the paperwork. Nevertheless, the campaign had two long-term positive effects on the project. The first was that the incentive of seeing the troops on the table resulted in a lot of painting. The second was that new players, including Ross Macfarlane, were recruited. Ross will have to tell his own story about this sometime, but, from my point of view, he started off by wishing to have a figure (which became a vignette) to represent his presence on the table, and ended up building the largest force in the project (to date) as he actually executed something like my original personal vision of the project, by creating a force that could be divided for games at home.
Following the campaign, we started running games at the HMGS-East conventions, and the “annual big game” has provided enough stimulus that the total order of battle continues to grow.
At Cold Wars in 2009 the big game was a Lobositz scenario. We had over 1000 figures representing the work of twelve contributors on the table. I am particularly happy to note that both of my sons were among those contributors, so that element of my initial vision has been realized. It took a little longer than I had expected, but what doesn’t?
As I write this, the future looks good for this project. A game at the HAWKs Barrage XIV convention on the 23rd of January 2010 featured new units, and there are more on the painting tables of the HAWKs. I still have hopes of completing my own second army. The rise of the Old School movement in the hobby has created an environment in which the NQSYW is considered almost mainstream, so I anticipate being able to continue to fill games at conventions, and maintaining the inspiration has become a lot easier with the new publishing programs we’re seeing out of England and the proliferation of imagi-nation blogs.
Posted by Rob Dean at 9:41 PM 2 comments: