I illustrated the previous post with the high level overview shots, to show the cpurse of the attack. Here are a few other shots:

Above, the Schoeffen-Buschhagen siege battery set up with supporting troops at the second parallel.

A Hesse-Hattemstadt company defends the covered way at the center ravelin.

Reinforcements from the Adelmann Regiment hurry forward to repel a sally.

The second Wachovian attempt at a forward battery was carefully supported.

Wachovians digging a position for a breaching battery.


We finally had an opportunity to put on a game on the 11th. I don't have any World War I figures, but I suppose a trenching game could be considered an appropriate theme for Armistice Day.

Players for this game were my sons Norman and William, and Norman's former college roommate Mark Zerfas. With three players (a comfortable number for my small war room), we put two on the attacking side and one defending the fort. As described on Norman's blog, Mark elected to defend the fortress, which we promptly named after him.

In terms of the ongoing Not Quite Seven Years War, we determined that this would be part of a prequel, The War of the Western League, pitting the house imagi-nations against the blue and red coated units acquired at Cold Wars in 2011. It is hoped that this war will form the basis of a trial campaign, and that we will incorporate any lessons learned before springing another campaign on the larger NQSYW assembly.

Playtesting last year showed that the defenders of the fortress could do little to impede the establishment of the first parallel, between five and six feet from the walls, so we had no qualms about starting the game a few days into the action with the establishment of the second parallel at the table's edge (due to limited space), about three feet beyond the walls. No attacking guns were in place on Day 1. Here's the opening situation:

The attacking forces of the Pragmatic Coalition opened the game by driving three saps forward toward the fortress. Defending fire caused a few scattered casualties, but was unable to delay the excavations:

On the second day (turn) General Zerfas redeployed his guns to permit concentrated fire on the center sap, which was left incomplete at the end of the day. However, saps to the right and left continued to approach the fortress, perhaps a shade too close...

The third day saw some sharp action, as four of the five defending companies sortied, three to the left of the fortress's front, and one to the right, to prevent the establishment of third parallel positions in close artillery range of the walls. The Coalition commanders, somewhat overconfident, found that they had driven the saps beyond easy supporting range of the second parallel, and they were forced to fall back, abandoning the incomplete positions:

With the covering fire provided, a battery position on the left front of the fortress was established on Day 5. The attackers had a minor setback when the first gun dragged to the forward position on the left was promptly disabled by a hail of fire from the defenders' mortar and guns, but their rejoicing was short lived as their mortar position disappeared in a huge explosion. A Coalition mortar shell had presumably struck the powder supply ....

At that point, it was nearly over for the defenders. Most of the artillery had been dismounted, so the disparity in firepower was growing. Sorties and the constant steady stream of casualties from artillery fire and musketry had reduced the defenders to a level at which another sortie was too risky. By the eighth day, the Coalition had established breaching batteries facing both bastions.

Now it was just a matter of time until the attackers could batter a breach in the walls that would permit an assault...approximately ten days.

With no relief force in sight, and their fortress breached, the remaining League forces surrendered the fortress on the 18th day and were granted the honors of war.

It was good to get the fort out after a year of doing other NQSYW related games. We had a few rules questions, but I will save those for a supplementary post, along with a few close-up action shots from the game. I was glad to have the impetus to complete a company of Schoeffen-Buschhagen engineers, so we will be ready for future sieges. 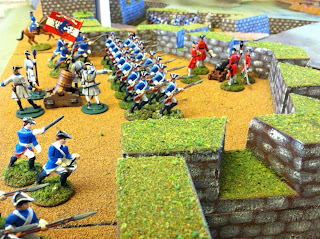 I'll write a full report, but the game is in progress. The defenders of Zerfberg await the Coalition attack...
Posted by Rob Dean at 1:51 PM 2 comments: 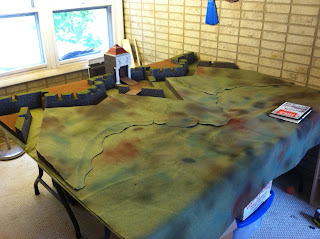 We finally gathered today and cleared the games table of the hurricane evacuation debris, after which we reset the fortress. Tomorrow, a siege game...
Posted by Rob Dean at 9:44 PM No comments: