On Wednesday I finished the back rank Saxons for this group of old Minifigs (NS range). 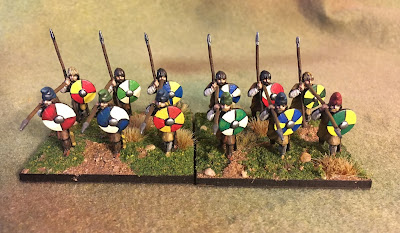 As part of my current project to run some games with Minifigs Mythical Earth figures, they will probably initially see action as part of this war band of the northern allies from after the Battle of the Five Armies:

In Dragon Rampant terms, the two elf units on the left will be light foot with mixed weapons (i.e. bows and swords) at 5 points apiece; the elf king and guard will be a "reduced model count" heavy foot unit (rated more for skill than for armor) at 4 points; the dwarves elite foot at 6 points, and the humans another light foot at 3 points.  That adds to 23 points, so I suppose the dwarves will use the odd point for enchanted weapons (usually useless) to bring the band up to the "standard" 24 point starter level.

Senior son Norman came up for a visit this weekend, and had the opportunity to join the monthly Ghost Archipelago campaign game currently running among the HAWKs.  He's been busily painting a bunch of Reaper Bones fantasy figures, so was able to field a crew of his own.  I am finally caught up with paperwork for this as well, and also fielded a Reaper crew, containing as many of my Gencon speed painting competition figures as I could. 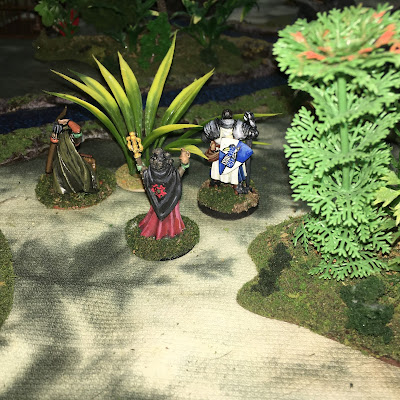 Six crews headed into the Lost Isles in search of various prisoners being held by the local bronze age petty kingdoms. 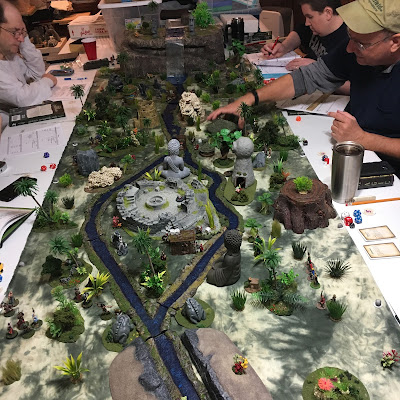 One of the nice things about being part of a club is the availability of large amounts of scenery, which is very helpful for Frostgrave and Ghost Archipelago, both of which call for very cluttered boards.  I'll leave the storytelling to the more talented members of the club, but it was a very good day for my Heritor.  His ability to throw large rocks downed the opposing Heritor who was contesting the prisoner cage with me, but the game ended before I was actually able to collect the prisoner.  Our Frostgrave games had gotten to be a bit diplomatic; Ghost Archipelago seems designed to encourage direct conflict among the crews, so makes for a better game, in my opinion.

After the Ghost Archipelago game, Norman and I put a small Dark Ages game on the dining room table, using the Osprey rules Dux Bellorum.  We have tried the game before. I hadn't intended to take five years to get it back on the table, but sometimes these things happen.  In the intervening years, I have been gradually painting away at various home cast figures (most Prince August) for the Saxons, and Ross Macfarlane gave me some vintage figures he wasn't using as the core of a Romano-British band.  While I painted some Romano-British cavalry skirmishers on Wednesday, the only new figures used in this battle were the massed archers, seen at the far right of the overview picture, just entering the bog.  Norman decided that if he was investing most of his points in his noble cavalry on imposing horses, he was just going to run down the Saxon invaders, and so it was.  As it turned out, the ability of his ordinary shield wall troops on his right flank to withstand the charge of the Saxon nobles was important as well, but most of the damage was in fact done by his charging horse. 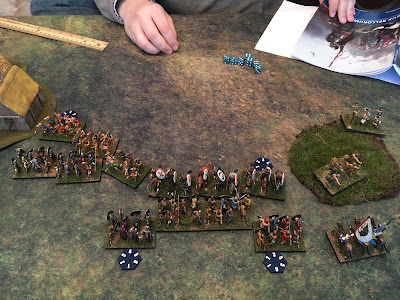 On our way down to the Ghost Archipelago game we had a chat about what made a game interesting or not, and Norman's point was that he liked to play the game and be in control.  The opposite position would be that one liked to see the battle simulated, which could involve a loss of player control due to activation rolls, contagious morale, or similar mechanics.  We noted that Dux Bellorum gives enough player control to be a reasonable game to his tastes, mostly through the mechanism of allocating the abstracted leadership points.  As can be seen by the picture, most of what is happening on the ground is a fairly linear clash.

Now that we have some rules familiarity again, I hope to have the game on the table again sooner than five years from now, and with some additional troop choices.  Once familiar with the mechanics, I think we'd get through a game in an hour and a half, so playing two sessions should be a reasonable expectation for an afternoon's gaming.

An unexpected winter storm gave me a snow day off from work yesterday. I made use of the time to complete two stands of cavalry and a stand of bowmen for my Dux Bellorum
project, and two three figure stands of old Minifigs spearmen to represent Laketown men or dismounted Rohirrim for my Middle Earth project.
Posted by Rob Dean at 11:48 AM No comments:

A few more reinforcements for the Minifig bad guys...
Posted by Rob Dean at 5:57 AM 1 comment: 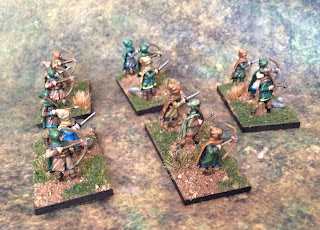 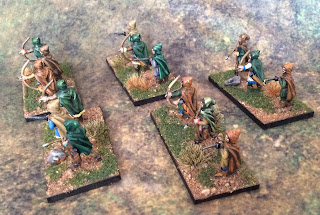