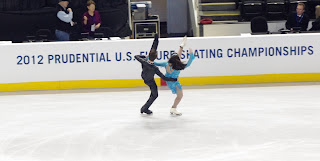 Wargaming will be on hold for a few days, while #2 son William skates in the US National Championships...
Posted by Rob Dean at 1:04 PM 4 comments:

Consistent with my New Year's plan to work on 54mm medievals and 40mm Renaissance, Ross and I have been discussing some Rough Wooing rules updates.  Unfortunately, getting together for a playtest game, with 1400 miles between us, has been an issue.

We decided that we'd try joining the 21st century, and run a game on Skype.  With my game table still down due to renovations, Ross volunteered to do the physical hosting of the game.  After a brief discussion of the latest changes to the rules, Ross set the camera to show the relevant section of the table, and I started flipping the initiative cards. 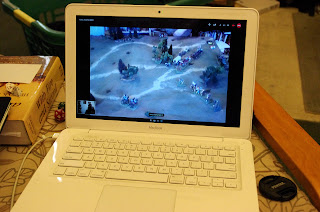 The scenario chosen was The Wagon Train, one we've used many times before, from one of C.S. Grant's scenario books.  To ease the description difficulties, I took command of the train, which meant that most of my moves would be along a road, and most of the escort could easily be described in relationship to the wagons.  At worst, a little "No, a little further back and angled to the left..." sort of dialogue settled things quickly and the game moved right along.

It almost felt like being there, including the side conversations as my sons wandered in to observe.  The bad news was that my dice were as cold as usual, and the attacking force (which could be scattered all over the board) was randomly arrayed by my son Norman in a near-perfect ambush.  The game ran 8 turns, with the convoy being entirely destroyed.  As a game, it went well; as a playtest, we'll need to go back and try again soon with a scenario emphasizing the parts of the rules not exercised this time. 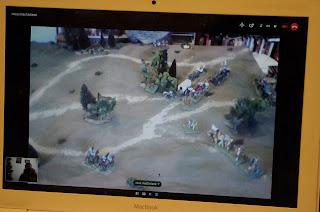 I trust Ross will add a proper battle report presently, but, in the meantime, I'm glad to have gotten the gaming year finally kicked off!
Posted by Rob Dean at 2:54 PM 4 comments: