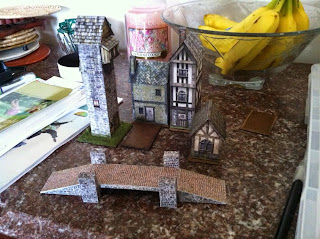 I will take a proper picture when I have the last three buildings I've planned, but as an interim, here is a shot of my fantasy village in progress. These are Dave Graffam buildings printed at 65% of their original size, the recommended reduction for 20mm. At that size small details such as chimneys are becoming a little difficult for me to work with, so I prioritized buildings without too many extra parts, and those with smaller footprints. The latter allows some additional visual compression when grouped as a village. The buildings to be built will include another one story hovel, another two story building, and one larger footprint low building for some visual contrast.
Posted by Rob Dean at 9:37 AM 2 comments:

(It's my turn for technical difficulties...the pictures are posted as separate blog postings...)

For the past couple of years, my long-time collaborator Ross Macfarlane and I have split the difference in the distance between our homes, and met at Huzzah in Portland, Maine. I hope he'll be able, some day, to return to a Cold Wars or a Historicon, hauling his horde/hoard of Not Quite Seven Years War figures for another megagame. In the meantime, though, Ross has us signed up to run an American War of Independence game using his With MacDuff to the Frontier rules. I haven't played a MacDuff game in a couple of years, having been distracted with other periods, and Ross has been tinkering with the rules in the meantime.

Thus, I was glad to have the opportunity to virtually drop into Ross's gameroom yesterday for a playtest session of the convention game.

Yesterday turned out not to be a particularly good day for the Internet, and we had some technical difficulties with the videoconferencing capabilities of Google Hangouts (rather than Skype). This left me with a bit of fog of war, as can be seen from the screen capture above. Neverthess, Ross was a good sport about moving the camera around as necessary.

The scenario involved two groups of settlers racing for a fort in an attempt to avoid Loyalist and Indian raiders, reinforced by some Hessian jaegers and grenadiers.

In case any potential Huzzah players are reading, I will not discuss the scenario too much. The key to the game, as far as I can tell, is that it is more likely to go well when your troops actually arrive on the table... The scattered raiders attempted to intercept the wagons, but never achieved local superiority and were eventually driven off piecemeal.

Remote games run a little more slowly than live games would, not counting the technical difficulties, but it still makes for a pleasant experience, and I'm rateful to Ross for hosting this time around. My turn next time...

Inspired by the game, I combed my French and Indian War collection for my contribution to the Huzzah scenario and mustered them in a Really Useful Box, in preparation for the trip. The figures, as usual, are a mix of Irregular, Sash and Saber, Prince August, and Nuernberger Meisterzinn. 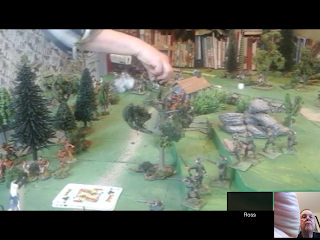 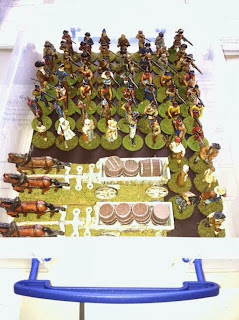 I put the final spray coat on another batch of 1/72 orcs today. These are still from the Dark Alliance Orcs 2 set, and this gives me enough to try a 1/72 Song of Blades and Heroes game.