A little more progress today; a Caesar adventurer and some creatures from the Age of Mythology sprues.
Posted by Rob Dean at 7:33 PM 3 comments:

One of my oldest friends, Joe,  suggested this year that we try to mount an expedition to GenCon. He was a member of my original D&D group in 1976. My brother, also a 1976 D&Der and a resident of Indiana, somewhat to my surprise, agreed that this sounded like a good idea, so we started to make it happen. That made this spring and summer quite a season for gaming conventions, between Huzzah, Historicon, and Gencon. Both of my sons were able to arrange their schedules to be part of this, so we descended on Indianapolis with a crew of five.

I last made it to GenCon (with my brother) in 1980. That was in a different world. The product releases that year included d10s and the 1st printing of the AD&D Deities and Demigods book, and the AD&D tournament modules were the Slavelords series. There were, perhaps, 5000 attendees. This year there were 50,000, so it was a dozen or more times bigger than Historicon, my recent benchmark for what I consider to be a "large" convention.

I really didn't know what to expect, so my pre-convention planning attempted to cover a range of reasonable contingencies. I had worked on the Portable Fantasy Game which I carried along, and I brought some roleplaying stuff for pickup gaming, travel edition Carcassonne, and travel edition Settlers of Catan. I did some research on people's experiences from previous years, so I was fairly confident that this was going to be more than was necessary.

We arrived in Indianapolis on Wednesday night, to find that the airport had put out the welcome mat for us, literally: 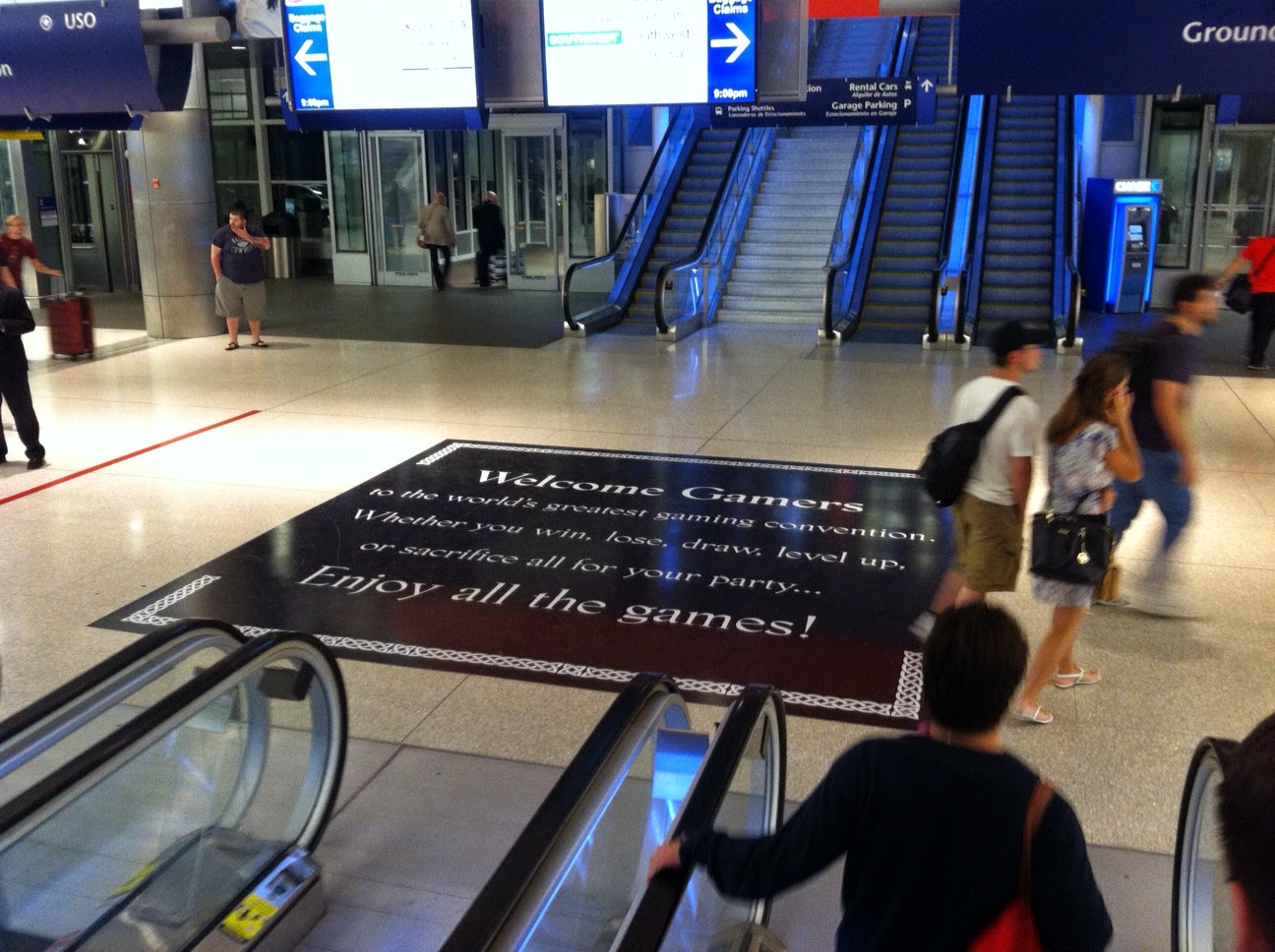 I had a game scheduled for 2:00, so that gave me some time to duck into the exhibition hall. I had prepared for that in advance, and had the map with the locations of some exhibitors I particularly wished to see. This was mostly companies whose Kickstarters I had supported, so that kept me busy until it was time for my first game.

My first game was a Fate game. For those who don't follow rpgs, Fate is published by Evil Hat Productions, who had a wildly successful Kickstarter for the publication of the 4th edition (aka Fate Core) back in late 2012. I have been playing in an online game for much of the year, and I wanted to see what a game looked at live at the table. The game was very interesting; Fate is an adaptable tool kit, and the GM was using it to run a game involving both characters and units in an urban uprising game. I am going to steal some of the ideas soon, so that was a success.

We got the whole crew together for dinner, which was nice, and my younger son had us all playing Fluxx until the food was delivered.

My first event on Friday was in the afternoon, when I had the opportunity to sit in on a live recording session for "Ken and Robin Talk About Stuff", one of my favorite weekly gaming podcasts. After that I scurried across the convention space to meet one of the other players in my online game for some pickup roleplaying offered by Games on Demand. We were in the last group assigned, so we ended up in an unusual little narrative game about being a labor clone in some dystopic(?) future. That was different, and definitely outside my usual comfort zone. I have been reading about indie rpgs for quite a while, so it was interesting to see something as far removed from original Dungeons & Dragons as can be.

My sons were signed up for some Diplomacy.  Here's Norman: 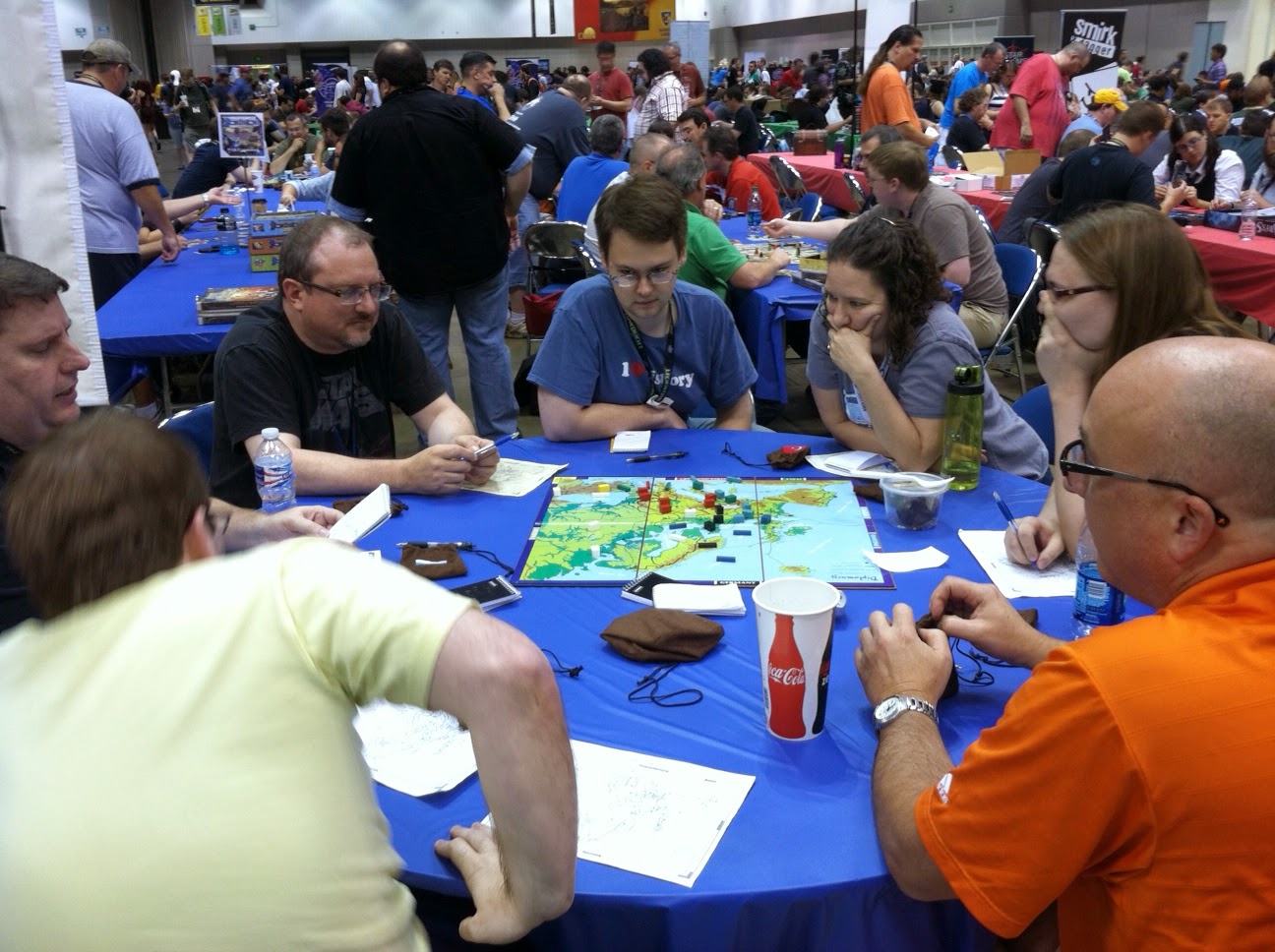 Four of the five of us were signed up for a modern-era National Security Decision Making game on Friday night. Norman and William have both done this before. The NSDM used to be a regular offering at Cold Wars. The topics vary, but the whole thing is based on freeform rpgs used by the US government for insight into high-level political/military matters. We had about 80 players for this one, which was divided into cells representing India, Pakistan, China, and Indonesia. I was representing the Indian steel industry, for example, with a goal of influencing my Indian politics to support my objective to open factories outside India and increase government spending on the steel industry. I used to do political LARPs for fun, so this was something I was comfortable with, except for the part where it was running until almost midnight and I was fading...

My one scheduled event on Saturday was a tank battle game, for which the whole crew had enlisted. 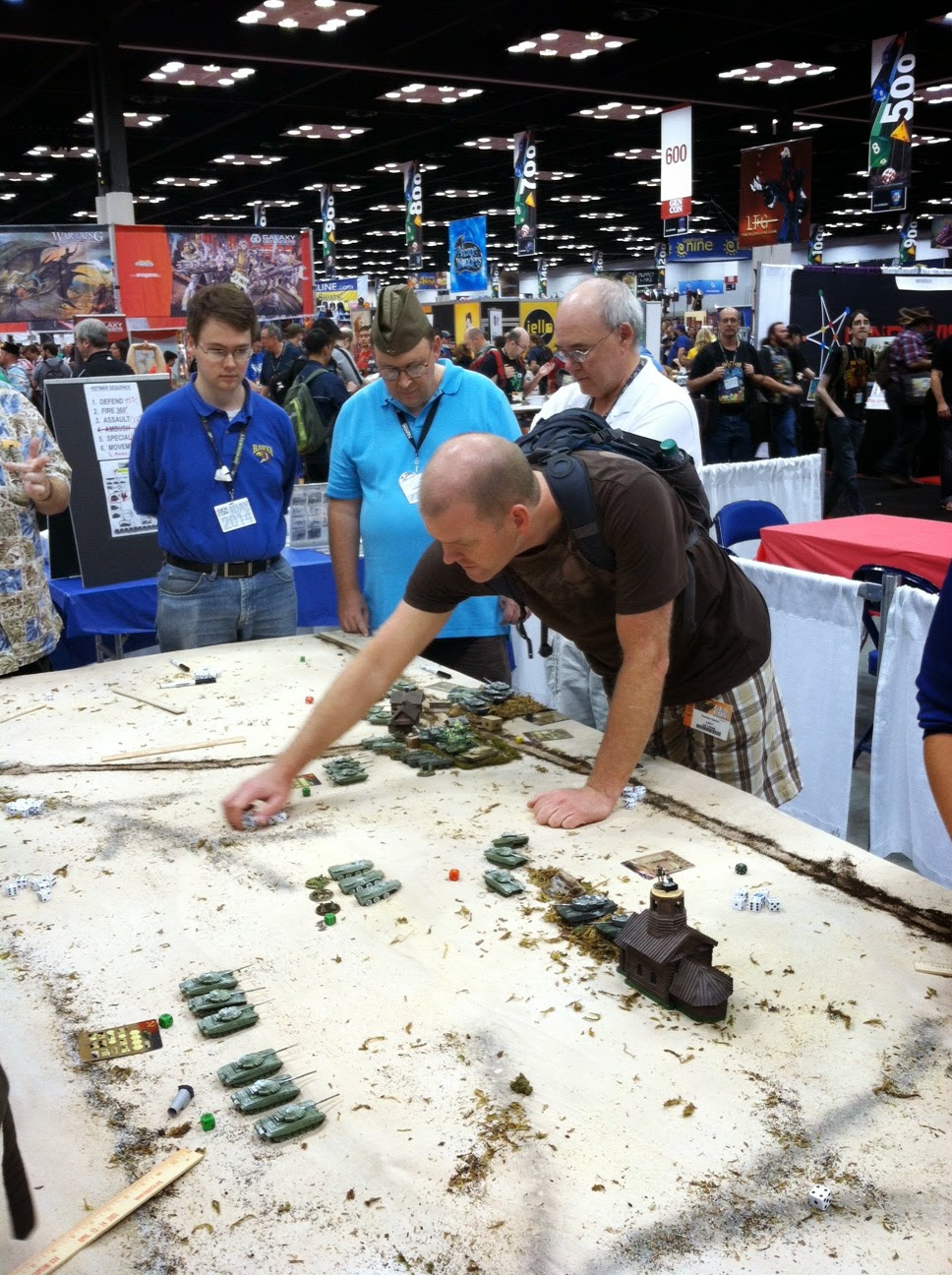 Once we were through with that, we had one more group dinner, and then grabbed an empty table for a pickup fantasy miniatures game, using the Portable Fantasy Game set (and the Song of Blades and Heroes rules) I'd brought along. One of my brother's clearest recollections of the 1980 Gencon was of passing a group of guys doing a pickup fantasy miniatures game on a table in a random hallway, who looked like they were having more fun than anyone else we'd seen that weekend. Therefore, I wanted to provide him with a similar opportunity this time.

On Sunday, the kids and I made a final sweep of the exhibition hall and then headed back over to Games on Demand for another roleplaying experience. I ended up taking the fifth (and final) seat in a session of Lady Blackbird, a game often mentioned on rpg.net as an example of a tight minimalist design. This was a lot of fun, and I was left with an urge to spend some additional time with roleplaying games in the near future.

In addition to the scheduled events, we spent a fair amount of time in the exhibition hall over the weekend. In addition to visiting with my open Kickstarters, I spent some time digging through various used (old) game dealers, and came home with a few miscellaneous things that I used to own...We also used the auction/consignment area as a convenient rest point. I had a bidder number, but didn't actually use it. I did buy a couple of classic Traveller items for later use.  In general, I was keeping the buying down because I didn't leave a lot of surplus space in my baggage for new purchases.

My main lessons learned from the convention were:

Don't schedule events closer than two hours apart. You could need almost that much time to buy food and walk from one end of the space to the other, especially if the first game should run a little over.

Comfortable shoes are an absolute must. I wore my hiking boots with appropriate socks, so I made it through the weekend without crippling ankle pain. I've been wearing a pedometer as part of a work fitness challenge. The first three days at Gencon all topped my previous record, and were about double whet I'd usually consider a good exercise day.

There's plenty to do, so not having scheduled events won't be a problem in having fun. However, additional preplanning would have enhanced the experience.

I'll leave it at that for now, in the interest of actually getting this report posted.
Posted by Rob Dean at 11:13 AM 4 comments: 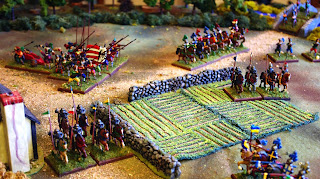 I should note that this game demonstrates one of my current little wargaming issues: too many things are interesting. The last three games played were all different scales, different periods, and different rules, and that doesn't begin to exhaust the possibilities.
Posted by Rob Dean at 7:17 PM 2 comments:

I've had some time to sit and paint, so I decided I'd go with the flow and add some figures to the Portable Fantasy Game. Shown are two Caesar Orc savages, a Caesar Elf, two Red Box galloglasses, a Dark Alliance warg rider, and a Strelets horseman.
Posted by Rob Dean at 4:02 PM 2 comments: