I had been back to blogging regularly for a while there, but the Christmas season preparations overwhelmed me this year, and things got out of hand again.

I only got a little bit of painting done during the month.  My 1/72 scale fantasy campaign collection started from a core of Airfix Sheriff of Nottingham and Robin Hood figures I had painted around the turn of the century for a kids’ game, and I have been using it recently with both Dragon Rampant and Hordes of the Things.  While Hordes uses single bases as the maneuver elements and any random stand can take its place in a battle line, Dragon Rampant is generally geared for units of 12 normal infantry.  I’ve had 6 of the armored archer from the Sheriff set (with 2 per box) and the recent Encounter at Terril’s Tavern wanted a distinguishable archer unit of 12 (two stands), so I finished up another stand of 6 for the next time. 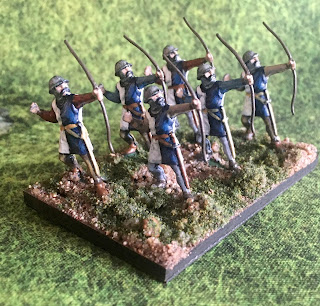 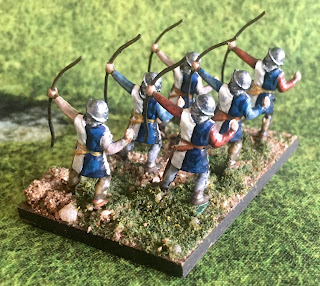 My son and his wife came for a weekend of cookie baking, which seemed to fill most of my crafting urges for the month.

I did get a few games in.  I even took miniatures on the road, and we had the now-traditional family Christmas battle with my brother and both sons.  We borrowed a table from the nice folks at Pandemonium games in Garden City, Michigan, for a try at Chaosium’s 1978 rules Perilous Encounters.  My brother has been collecting old rules to go with his vintage miniatures, and had been wishing for a test of these rules for some time.  Unfortunately, we didn’t really care for the results, with the morale rules, in particular, being a bit dd.  It was still good to see all the vintage lead on the table.


Elder son Norman received a copy of DBA 3.0 for Christmas, and thought that it would be interesting to dust off our somewhat neglected joint 1/72 scale Bronze Age project to use with the rules, so as the calendar turned over to January, he started painting Caesar Hittites to put on regulation bases. Our previous efforts were mounted as the 6-8 man 60mm by 40mm infantry bases we have been using uniformly across our 1/72 scale projects, and chariots were mounted on the same bases oriented toward the 40mm edge.  DBA wants chariots on 60mm by 80mm bases, so I cautiously pried four of them loose from their old bases for rebasing, rather than building sabots of sort sort.  They looked a little lonely on the large bases, so I started my efforts to support his enthusiasm by painting a pair of chariot runners for each base:

With that done, I could field an Egyptian army, as long as I didn’t mind using the original double rank infantry stands.  While I will probably paint single rank Egyptian infantry on regulation-depth stands fairly soon, I then turned my attention to the first of the opponent armies.  I should be able to do Libyans, Sea Peoples, Nubians, Syrians, and my own Hittites eventually. I have the stockpile of miniatures already, at least, even if the inspiration sometimes comes and goes...I decided that the Libyans would be first, and began with their 5 (?!) light infantry stands: 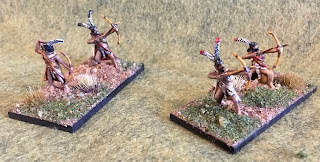 They also get two stands of swordsmen (‘Warband’ by the rules):

That leaves me three stands of warriors at three figures each, a commander in a chariot, and a stand of Sea Peoples swordsmen to go before a test game.

The  other things that has been occupying my paint brush this month has been vintage Minifigs “Mythical Earth” figures.  I’d had a unit of little goblins on the work bench for a couple of months, and finished them off as the “skull” tribe at the end of my vacation, before going back to work on January 6th.  I based them in 3s for flexibility.

I also finished off eight “true orcs”, based as single figures, which should give me a round two dozen for use with Dragon Rampant or as opponents for the heroes in some potential retro-style D&D game.

Inspired by the rapid success of that effort, I tackled the next dozen goblins, of the “red hand” tribe:

With the completion of that unit, I was down to the last dozen on hand (and they are not presently available from Caliver Books collection of old Minifigs molds) and had the pattern of painting them worked out, so finishing up the sixth (and final, for now) “mountain” tribe did not take long.  I had based the first tribe on 1” individual bases, but thought that it might look better if they weren’t in quite so loose an order. I therefore chose to mount this last group on individual 3/4” bases, which will make it easier to use them in that potential future D&D game as well as in Dragon Rampant.

There’s still one more weekend left in the month, so it’s possible that I’ll get some more Libyans or the next Mythical Earth true orc unit done, but even if I don’t, it will still have been a solid month.
Posted by Rob Dean at 12:32 PM 5 comments: