Down the Rabbit Hole, Part IV

It has been more than usually busy here the past couple of weeks.  My partner and I finally got married yesterday, in a quiet ceremony at home.  For pandemic protection, attendance was limited to eight total, but we still had everything all cleaned up and looking good around the house.  The folding wargames tables did double duty as actual banquet tables for a change.

I got a few additional Prince August castings finished up for the fresh start fantasy project.  There are two figures from the Men of the City mold (652), and a wizard from the Wizards mold (657).

I’ve got a mounted warrior in progress that I’ll probably finish next. That would give me nine humans, which is probably close enough to work up a standard-sized Song of Blades and Heroes warband.  (There are also four Men of the City spearmen being done as a group, if it turns out that I’m a bit short.). That means the next thing that I will get started on is an opposition warband, to be drawn from the collection of orc, goblin, hobgoblin, and troll castings.  The undead warriors, skeletons, and wraiths all cast reasonably well, and would be an alternative possibility, but Oathmark currently has no undead unit profiles, so my intention is to do this with an eye toward future expansion.

Down the Rabbit Hole, Part III

Life continues to be somewhat hectic in the midst of the pandemic.  Working from home has been more exciting than usual, as my work computer has been failing, so that everything requires more effort than it is supposed to.  Perhaps it’s for that reason that I have turned to hobbying to get away from things for a bit.  Since the last post I have had two casting sessions (finishing off venting and test casting all the early Prince August fantasy molds, catalog numbers 651 through 671), painted four buildings and some 3-D printed rock formations, finished four hills which had been in process for a while, and built three tree stands.  What I haven’t done is painted any more of the Prince August figures. 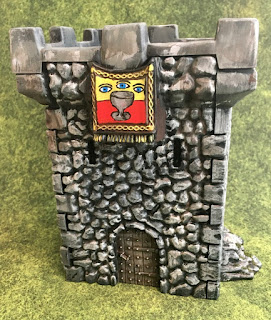 Joe Procopio recently posted pictures of work he had been doing on a Hudson and Allen castle, but he also had a freestanding tower from the old Milton Bradley/Games Workshop Battle Masters game.  I thought it looked good, and was able to find one on eBay for a reasonable price.

I have been playing around with various ideas for scenery upgrades for a while, and had ordered a package of 3-D printed cottages from an outfit on Amazon called Ender Toys.  They aren’t the most detailed buildings, but I decided I’d give them a try since they were light and inexpensive.  Also, the reviews noted that the doors were more in scale with 1/72 or old 25mm figures than with modern ranges like Reaper’s, and that’s just what I’m working with at the moment.  In the long run, I anticipate adding them to my convention scenery collection due to the light weight and durability.

The hills I finished were done using the same techniques I posted about back in May. 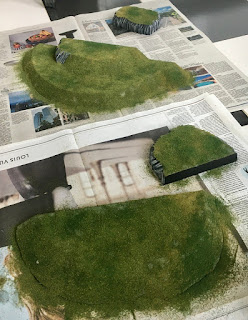 Three of these are flat-sided for use at the table edge; the last one used a scrap of plastic otherwise useless, and got the vertical stone treatment all around (signifying rough terrain) to be big enough to bother with.  Beveled edges would have left very little flat area on the top.

Last year at Gencon I took a workshop on scenery, and resolved that I was going to trade increased storage volume for trees against reduced wear and tear on them by mounting my home scenery collection trees on group bases.  I came back with one partially constructed sample base, and finally got around this week to building some Woodland Scenics trees and mounting them to the base. I’ve also acquired some finished commercial trees of varying qualities.  Recalling the advice from Dave Frary’s book How to Build Realistic Model Railroad Scenery, I anticipated basing trees in groups of at least three, and mixing colors, sizes, and sources as much as possible.

I also recently obtained two small (30” by 22”) mousepad-type mats from Frontline Gaming, one of which is a basic grassland design.


I finished up the other two woods bases this morning, and loaded everything recent onto the 30” by 22” mat to see.  It’s now looking crowded enough for a skirmish game, although some walls or hedges would be nice.  I’ve got some Mantic Terrain Crate walls needing painting, and this will probably be a good excuse to get it done.  I have some 2-D roads and river sections (also in neoprene), to finish off the battlefield. 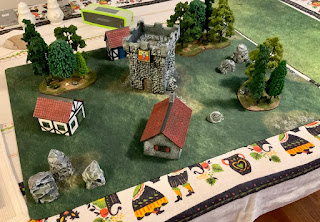 When I get back to painting figures, I want to get a few more humans done to beef up the warband represented by the five figures shown last time, and then get the double handful of orcs, goblins, and hobgoblins done so that I can stage a Song of Blades and Heroes game with all new figures and terrain.  I’m hoping that will give me a little more appreciation for what somebody new to the hobby is facing, at least a little.  Obviously I have years of practice in getting things painted quickly, and the information necessary to source things from all over the internet.  Once I’ve got that game out of my system, I’ll shift to painting something else for a while...