My sons proposed that we devote a day this Thanksgiving weekend to a painting bee, with the slowest painter to buy the pizza tonight. For purposes of comparisons, we all worked on 1/72 scale plastics.

I chose to add some Spanish cavalry to my Punic Wars project, completing 7 in our allotted five hours. Norman was working on Bronze Age infantry, and William on some Almoravid infantry, but I'll leave full coverage to Norman's blog...

Messing About in Boats 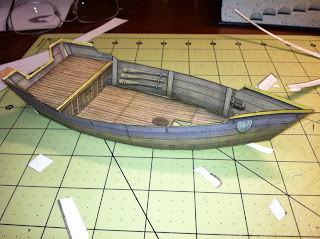 I was expecting some quiet time at lunch today, and was able to make a good start on this Dave Graffam patrol boat model.
Posted by Rob Dean at 12:48 PM 3 comments:

Song of Bones and Heroes

I had an opportunity today to have Chris Palmer over for some gaming. We have both been painting Reaper Bones since the first Kickstarter was delivered. In the interest of providing some inspiration, we decided we would have a go at Song of Blades and Heroes. As games go, it has several advantages. It's intended for small groups of figures, amenable to including all manner of figures, and fairly simple in mechanics.

This was only the second time I've actually played these rules. Norman and I did a test run of these over a year ago.

In anticipation of the game, I finished the bases of the paper model building groups I was working on the other week. As expected, warping of the inn base is an issue. I'm going to need to google around and see if anyone has posted solutions for keeping large pieces of foam core board flat...

Working on the scenery and some social requirements left me short on time to review the rules. That meant that the first game was a little slow as we worked through rules lookups. The second game was better, and I'm sure I'd have the key provisions memorized by the third or fourth game.

As an aid to learning, we kept the scenarios down to simple encounter battles. The first game involved a band of 4 very expensive elves against a band of nine ordinary orcs supported by a hill troll.

I thought things were off to a good start when Chris send an elf sneaker around to attempt to eliminate my troll. Any plan can look good with die rolls like the 1 vs. 6 shown above.

However, I read a recent review of the game which pointed out some issues when one side has an all-elite band because of the activation die roll mechanic. Chris's elves all had a quality of 2, which meant they seldom failed at activation, where my standard orcs frequently failed, passing the initiative back to Chris. This is where some additional experience with the rules would have helped; adding a figure with the "leader" special ability would have helped my orcs considerably.

In any case, Chris's elven hero was invincible, and gradually hacked his way through most of my orcs. After being reduced below half strength, a morale roll caused my wounded troll and one other orc to flee, so the other two decided to call it a day.

We reset the board and tried again with two different warbands. Mine was non-compliant (too many points in special figures), but we decided to go with it anyway. I had six mixed humans supported by an iron golem, and Chris had a medusa supported by a half dozen skeletons. I only got one picture from the second game, being distracted by the need to finish quickly.

I almost thought it was going to finish too quickly, as Chris's first volley took out two of my figures. However, his skeletons were more fragile in melee than he expected. So, despite dropping my wizard with another arrow, my fighters and golem made short work of his skeletons. Bereft of her minions, the medusa apparently remembered an appointment elsewhere.

These were fun little games, and I look forward to an opportunity to read the rules more closely, and try another session soon.

Not done until the paperwork is finished...

I had a quiet weekend mostly to myself last weekend, followed by a hectic week at work playing a mid-sized LARP. (Or, as my management might prefer to think about it, engaged in a contingency response field exercise...) In any case, it was frazzling, so I'm now glad to have some time to catch up.

I posted a picture early last week of paper construction. With an eye toward a near term fantasy skirmish game, I wanted to use some Dave Graffam PDFs to create a walled inn compound.

I built the first building, a variant of the Grey Hare Inn, a few months ago. Many of the Graffam models are multi-layer files, so you can print them out in many variations. I went for an all stone one. It turns out that the stone color in this building is not the same as the gray stone in some of the others; I elected just to ignore that as resulting from differences in weathering or construction date.

The second building I added was the Coach House, again printed as an all stone variant from a multi-layer file. With this one, I also had choices to make about where I wanted the doors to be, so I had to begin thinking about what the layout of the whole compound would be.

Fitting them together gave me an idea of how the whole structure would fit together. I also had a Garden Shed I'd constructed, which I planned to place somewhere along the inside of the perimeter wall.

At that point, construction became a relatively simple process of building enough wall sections and a gate, to form the perimeter.

With all of that in hand, and with some subassembly construction done, it was time to fit all the pieces onto a foamcore base. Measure twice, glue once! I had to pull one assembly up after it was pretty well attached to reposition it, a mistake I would prefer not to make again.

I am still working on the base, so that's as complete a picture as I have at the moment. My intention is to use plain sand for most of the interior, with ground foam grass near the walls and in a few lower traffic areas.

With the inn compound drying, I turned my attention to the next project. I think that I'd like to have several blocks of town buildings that can be repositioned with respect to each other. I have not entirely decided how to use them on the table, so that's likely to be the topic of a future post.

For the purpose of this test, I decided to arrange some buildings around a central courtyard. Five buildings turned out to be enough to get the look I wanted.

Before building the second block, some additional planning might be helpful in making it useful on the table. I eyeballed the court rather than measuring it, so it could have been sized to fit more than one of the 6cm square bases I use for massed 25mm fantasy and for 40mm Renaissance. The Graffam models tend to be tall with small footprints, and I wanted a jumbled roof look, so I tried to mix two and three story buildings, with one low building and one four story building for contrast.

I tiled the courtyard in a Graffam cobblestone print.

With some attention to the base sizes, I think this system could be used for 40mm games, where the buildings are under scale, as well as for 25-28mm games. I expect to have more to say about this after a field trial.

The paper models stayed on the shelf this weekend, and the paintbrushes remained in the holder. Both of my sons were home in conjunction with having friends over for dinner, and William was busy with homework.
Nevertheless, Norman and I found time for a Hordes of the Things session on Sunday morning. Both of us have painted new troops since the last time we played, so we wanted to try them out in combat. We fought three games, all with different army match-ups.

Game 1 pitted his mostly rider-based fantasy Mongols against a ragtag band of my miscellaneous fantasy stands. I managed to summon a dragon, which took out a rider and a hero before fleeing after a wound. I remain dubious about the use of dragons in HotT....Still, I won that fight.

The second game pitted the same raggle-taggle fantasy army
against Norman's fantasy Byzantines. Once more, I managed to get my dragon into play early.

I even managed a flanking maneuver, causing his general to turn to face, subject to destruction if forced to recoil. The first game wore out my luck for the day, though, and my dragon was sent fleeing from some doubtless minor wound. With that, Norman rolled up the remainder of my resistance in short order.

After a brief break, we went for a tie-breaker, pitting his
Antediluvian army against a force
of my recently rebased Carthaginians. We ended up with a clash of phalanxes, which was
broken when his hero worked his way around to the back of my line and blocked the retreat of my commander's phalanx. With the resulting loss of my general, my army disintegrated.

All in all, a pleasant gaming interlude, my 29th for the year... 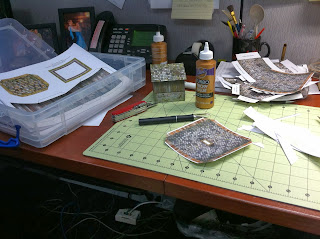 I haven't had much free time at lunch lately, but I did bring my paper models project box yesterday. I got some work done on a planned inn compound, using various Dave Graffam PDF files...