The weather was cooperative today and I had little else on my schedule (besides a ballroom dance event later this evening...), so I decided to take advantage of the circumstances to do some casting. I've recently been trying to get two playable warbands for Dux Bellorum using these home cast figures, and the last metal working session left me nearly out of round shields. I was also short of oval shields for the Late Romans. If I don't get another chance, I should now have enough to carry me through the winter for painting.

Since the molds were in the same box, I tried a few casts with the molds of the 54mm 'Trojan Wars' figures (from Heralds plastic originals). I keep circling back around to Greek legendary/mythological topics, so there are enough to keep me busy for a while if one of my ideas finally gels.
Posted by Rob Dean at 3:42 PM No comments: 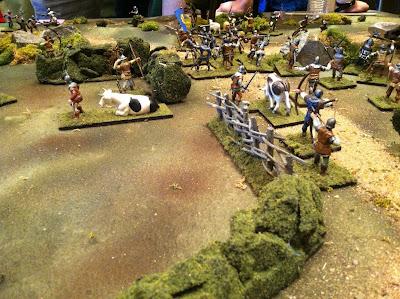 I've been in a busy period at work, so I haven't been doing too much gaming in the evenings the past couple of weeks.  I did get one thing done, as a leftover from the previous blog post.  I sat down and finished the Saxon mounted companion stand I've been working on, for Dux Bellorum.  I'm experimenting with some commercial flags from Wargames Designs for this project.  I also did the metal work last weekend on several more stands' worth of troops, so I'll be able to provide some choices in war band composition for the Saxons even if I don't get in a casting sessions before the weather becomes too cold. 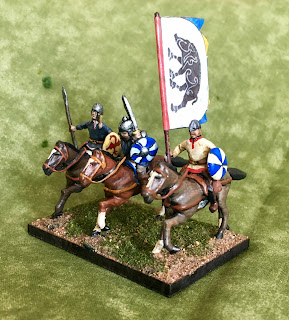 My son Norman had arranged to stop in for a visit this weekend, in conjunction with getting some car maintenance done, so we had been considering what we might do by way of gaming. He has been working (intermittently, as we all sometimes do) on a 19th century imagi-nations project for several years, originally inspired by the acquisition of some interesting toy building blocks at Cold Wars back in 2014.  He's recently completed a few more stands, leaving him with forces that would do for Neil Thomas's One Hour Wargames rules.  Ross Macfarlane had posted a review of One Hour Wargames back in 2015, and I didn't have high expectations, but I also didn't have a good suggestion for an alternative set of rules, so we agreed that we would give them a try.

One of the nicer aspects of One Hour Wargames are the scenarios, already keyed to a three foot square map.  Norman and I both have sets of double sided mats in that size, so setting things up was a breeze.  The first game we tried was using Scenario 9 "Double Delaying Action".  I took the Elabruenese forces, attempting to prevent the Occiterrans from capturing the town and exiting the map on the road on my side of the river, while also subject to a requirement to withdraw three units at various stages of the game.  We each had a full six unit army (the maximum given for scenarios in these rules).  I ended up able to withdraw my units on schedule, but was unable to prevent the capture of the town and the subsequent exit of a pursuit force,

We chose scenario 8, "Melee", for our second game.  We switched armies, since Norman wishes to maintain an impartiality to these forces, rather than espousing loyalty to one of them. The scenario involves both sides attempting to control a dominant hill, with forces coming in piecemeal for both sides.
Since Norman's forces started in possession of the hill, it was up to me to take it, and I did start with a larger force.  Unfortunately for me, I was still figuring out how tactics work in this game, so ended up spending too much effort uselessly attempting to get an artillery unit in position.  I was never able to put enough concentrated fire on the hill to clear it, and Norman was victorious again.


After the game, we did a quick hot wash, and concluded that the side with the need to move into the enemy fire zone first was going to be at a disadvantage.  However, with the random force assignment, we did note that the battle would have been much different if his force had included cavalry instead of the skirmisher who had made trouble in the woods through the whole game, for example. 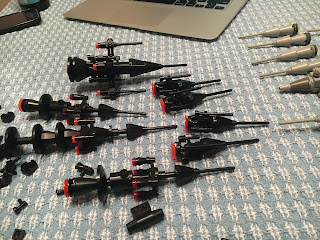 We had intended to play some Full Thrust, a space game that's been in Norman's collection for many years, but the business of digging out Legos and forming them into two spaceship squadrons took longer than expected.  We boxed the ships up for the next visit, which will give me a chance to read up on the rules as well. 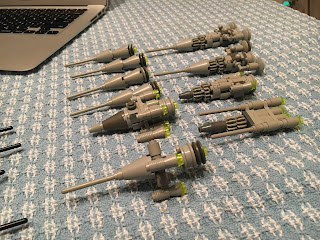 Before his departure this morning, we threw one more One Hour Wargames scenario on the table.  This time the battle was #10, "Late Arrivals".  A random throw left me with the Elabruenese as defenders in a race against time, as I started with 2 units against his 6, and the reinforcements were not particularly prompt. 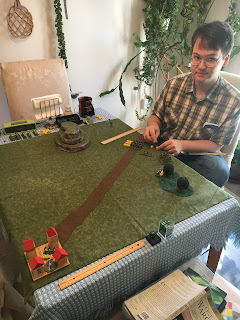 I did, at least, have a town to defend.  This time around, Norman got an army list with cavalry and no artillery, and the cavalry can't enter the town. 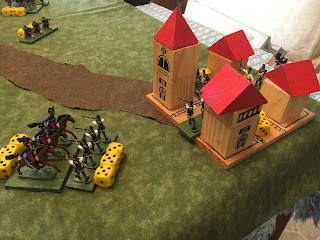 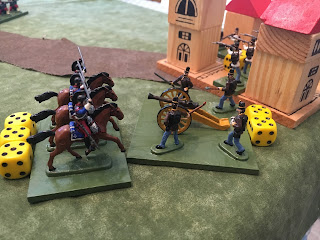 That made the open ground a dangerous place for my troops, but the difficulties Norman had in wearing down my town defenders fast enough ultimately gave me the victory, leaving me one for three for the weekend.

Nevertheless, a good time was had by all, and it was nice to have the opportunity to get his project on the table for the first time.  I would play One Hour Wargames again; it was neither quite so static nor so fast as Ross's review had led me to expect, but I should note that he used the ancients rules section, while we used the horse and musket rules.