September turned out to be a busy month in several ways, and I thought that I would blog about some of it as it was happening.  That, of course, did not turn out to be the case.
I’ll start off with a disucssion of painting.  Included above is everything I painted for the month.  There are three 8-figure stands of 1/72 scale medieval city militia, from Strelets and Ultima Ratio, a single 1/72 scale Strelets axeman done as a fantasy individual, 3 Ral Partha orc leaders or champions from the 2015 (already?) Iron Wind Chaos Wars revival Kickstarter, a new Reaper science fiction drone for my Stargrave crew, and a couple of small pieces of scatter terrain. That’s 31 figures/pieces in a 30 day month, a rate I haven’t hit since the Before Times. I will do what I can with October, but matching that seems unlikely.
We had Barrage 24 on September 24th/25th.  I was involved in five games, and had eight total for the month, so that was good too.  One of the Barrage highlights was an opportunity to play in a game run by local GM Matt Kirkhart, who has been building his own miniatures out of bits of stuff from the craft store for many years.  This year’s scenario was a recreation of the climactic battle from the 1982 Conan movie, run as a 4-player co-op game. 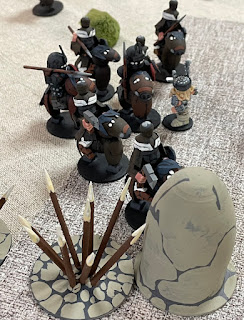 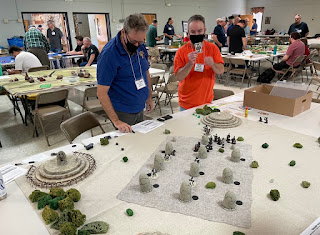 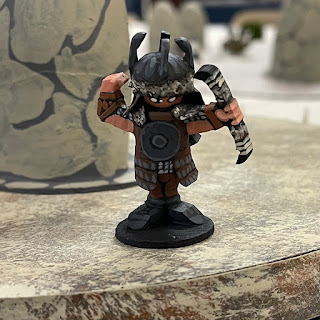 We managed to save the captive princess and Conan survived, though it looked like he wasn’t going to be as effective a fighter as his companions for a while…
It was going to get its own blog post, but in the interest of getting the information out there at all, I wanted to mention that I have run across several references to the Zorn palette recently.  Anders Zorn was a Swedish painter of the late 19th/early 20th century famous for doing many of his painting with four colors of oil paints, a bright white, a bright red, an ochre yellow, and a bluish black.  With some advice my son gleaned from Internet painting discussions somewhere, I emulated this with four Reaper hobby paints: 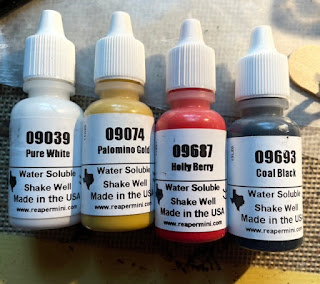 The only blue you get is a faded denim/slate blue from mixing white and black; green is an olive from the yellow and the black, and caucasian skin tones are red and yellow with just a dash of black. 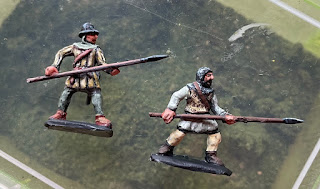 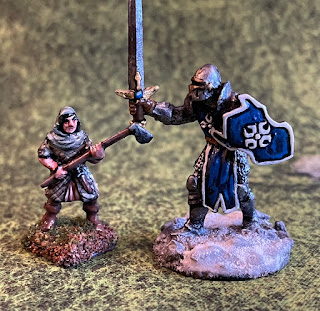 You end up with a somewhat subdued color range which seems to me to work well with medieval sorts of fantasy figures.  In the group shot that opens this post, the two stands of spearmen at the left rear were all done in Zorn colors.  It was a fun and relaxing little exercise, and a Zorn color selection is going in my travel paint kit next trip.
There are lots of ideas on my mind right now.  Norman has been working on Bronze Age DBA armies, so I am trying to get some Nubians painted.  Adding several 1/72 stands has me thinking about rounding out the planned armies for my Portable Fantasy Campaign, especially with the prospect of running something with 1/72 figures at Huzzah next year, and the Ral Partha orcs were intended to fill out a nicely themed one manufacturer orc army to give Nic Wright’s Fantastic Battles rules a try.  The Stargrave campaign is settle down as we learn the peculiarities of the rules and of our crews’ particular abilities.  I was in a co-op Rangers of Shadowdeep game at Barrage, and I’d like to get the pieces together to start playing the introductory scenarios.  So there’s lots to do, and I’ll try to be better about posting some of it…
Posted by Rob Dean at 9:22 AM No comments: