Historicon felt like it came as a surprise this year. When the HAWKs started planning, I had no idea of whether I'd actually be able to make it, or whether either of my sons would be able to make it, so I decided to go safe. I signed up to do three small sessions of Not Quite Seven Years War games, each intended for six players, figuring that I could handle six players by myself.

As the convention approached I realized that that was as far as I had gotten. So, a week before the show I pulled out my trusty copy of C.S. Grant's Scenarios for Wargames. A quick look through gave me the three scenarios that I needed for the convention, all trusted ones I had run previously: #1 Positional Defence (based loosely on Fontenoy), #15 Reinforcements in Defence: On the Table, and #32 Convoy -- Wagon Train. Past experience has suggested that the following translation factors work well for 40mm games on a 6x10 table with my bases:

Since I'm using existing NQSYW units, sometimes I'll round up or down depending. For example, the Fontenoy scenario needed two regiments of defending infantry, and one of those has a grenadier company. I let the attackers round their guns up to balance that, not that it ended up doing them any good, as we shall see.

With that bit of planning out of the way, I got ready for the convention on Wednesday by staging all of my transport boxes ready to load. I was out of the house by 10:00 on Thursday, started off on the 150 mile drive. I had hoped that would put me through Washington at slack traffic, but there was still a five or more mile backup south of the city for some construction. Nevertheless, I made it in a reasonable amount of time.

I spent Thursday afternoon having a look around at things. I was relying on Norman to prevent my from buying anything except bases on paint, so I was a little hesitant to brave the dealers area without him. I'll just say, with respect to shopping, that I did manage to buy almost nothing other than the utility stuff on my shopping list, with the exception being a couple of Parroom Station ten-legged Martian hounds for my pending Barsoom skirmish project. I also found a few old wargaming hardcover books in the flea market, but overall, I was restrained.

Norman arrived on Thursday evening. We weren't playing anything in particular, so we set up a quick Bronze Age encounter battle, so that he could practice his home rules before his official games on Saurday.

This ended up in a Hittite victory; it's probably time to paint some more Egyptian chariots.

I signed up for one game on Friday. Nancy Ott, a longtime HMGS-East gamer, runs a three-dimensionalized version of the old Ariel/Avalon Hill boardgame Mystic Wood. I sold a bunch of medieval 25s to her and her husband several years ago, some of which appear in this game, so it was an opportunity to visit with some of my old figures.

I didn't notice in the program that this was intended as a kid's game, but I didn't turn out to be stealing a place from any kid, and the boardgame was intended for general play. I think I had a copy at one time, before the great boardgame purges...Anyway, it was a lot of fun, and I started wondering whether I could do the same sort of thing with some other period, say, Darkest Africa...The game finished up with plenty of time to spare for setting up my own Friday evening game.

Of the three scenarios, I chose to run The Wagon Train first, as being the one most likely to benefit from Norman's limited availabilty as an extra gamemaster.

I used one ravelin from my fortress set up to represent the convoy's goal. Norman randomized the raiders' arrival, and we looked it over to see if it seemed like a plausible game. Since it did, we carried on.

We ended up with six players. Oriented by the picture above, the convoy chose to take the road to the left of the picture. Most of the attackers arrived from the far right corner, except for the light troops, who arrived around the middle of the left side.

Overall, then, the convoy was fighting a rear guard action against the heavies to their left, but was stalled in forward progress against the lights who popped up right in front of them. After some extended maneuvering (16 turns in Charge!; most games last less than 8 in our experience), the raiders finally wore down the escort and charged the wagons just as the reserve cavalry was released from the fortress, about two turns too late to make a difference.

We cleaned up and headed back to the room for the night.

Norman was running his first game, a general Egyptian/Hittite battle first thing in the morning. I didn't have a ticket, but only four of the registered players showed up, so I was able to drop in and command a few of my own Egyptians.

The Caesar plastic miniatures attracted a fair amount of attention. 1/72 scale gaming is still pretty rare at the conventions. Given that modern techniques make paint adhesion easy enough, and given the nice scuplting and light wieght of boxes of the finished miniatures, I find this a little surprising. After an extended battle, the Egyptians eventually eked out an advantage over the Hittites for a victory.

Norman needed to reset after the game for a second, more complicated scenario, so I chose to run the Fontenoy game next, as it was the easiest to set up single-handed.

By that point in the convention I was getting tired, and the quantity of pictures was decreasing rapidly. I only had a few players, so I ended up filling out the game with spare HAWKs. We had run this scenario recently at home. Despite a strong numeric advantage, the attacking forces of the Pragmatic Coalition managed to be defeated by the defending Northern Alliance troops. Assaulting the central town was too costly, and an early unfortunate deployment left their artillery, vital to supporting an attack against towns and redoubts, out of action for several turns.

I reset the board and the troops for the third scenario. When I ran that one last year, the defenders definitely dawdled with their reinforcements. This time around, they didn't seem to, but the attacker's willingness to take casualties allowed them to overwhelm the hill position before infantry could reach it. Here's a shot of the Schoeffen-Buschhagen jaegers skirmishing up to the right hand end of the defender's position, held by a company of the North Polenburg Queen Jennifer Regiment.

I don't have a picture of the last game I played at the convention, but I closed out the weekend with a 1/6000 scale naval game run by fellow HAWK Duncan Adams, using home rules to resolve an Anglo-Italian WWII action. I was reminded that WWII naval was one of my earliest interests; I may have to dig out my own ships and do something...

One observation was that the ancients games were all heavily registered. I am thinking it's time to let the NQSYW rest for a little while (at conventions), and run something Sword and Shield, probably Dark Ages Saxons and Vikings.

It was a pretty good convention overall. I was involved in 7 games in 4 days, so that I am up to about 20 for the year, which isn't too bad. I didn't add much new stuff to my work queue, but did get things needed to move over stuff off the queue. I am inspired to be painting and preparing. What else can you ask for? 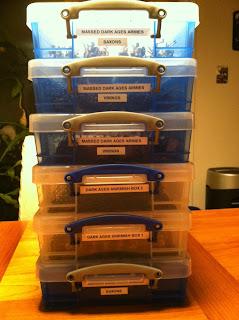 Another project for the weekend which didn't require much thinking: labels for the miniature storage boxes. I've been spending too much time shifting boxes looking for specific ones.
Posted by Rob Dean at 9:45 PM No comments: 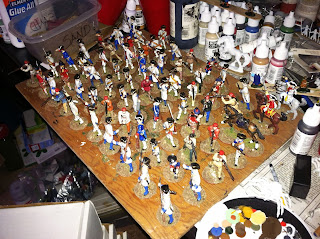 While my Historicon report is started, I was lacking in creativity this week. It seemed like a good time to try to finish rebasing the French and Indian War figures.
Posted by Rob Dean at 10:21 AM 1 comment: 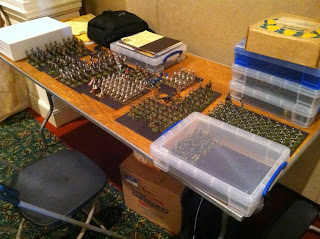 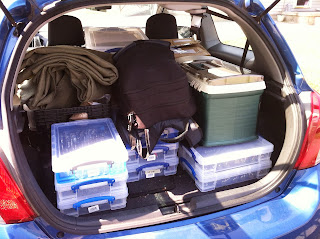 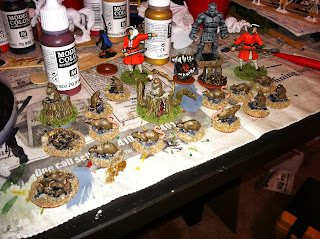 I've finished the painting on the Bones warmup, and have the basing in progress as seen here. These are utility paint jobs, so no close ups today...

In addition to the Bones, I also finished off an NQSYW artillery crew, and both versions of the Tentacles and Eyeballs "Wolf in Sheep's Clothing".
Posted by Rob Dean at 3:32 PM 2 comments:

...or at least boiling Bones.

It is scheduled to be an overly busy weekend, but I wanted to try to build up a little momentum on the Reaper Bones project.

I decided to start with a couple of easy paint jobs, so I pulled out a stone golem and a dozen giant rats as a warmup. I also unpacked the second Vampire box to ensure that everything was there. Since it was, I packed things higher on the priority list back up in ziplock bags, and dropped the remainder into a box to deal with later.

I then tried the recommended method of straightening pieces, which is to immerse them in nearly boiling water, fix, and then drop them in an ice water bath.

The ettin below was easy, with just the club end bent. Here is the before:

Here is the after:

This Chonoscope figure was crushed flat, but sprang back into position immediately in the hot bath.

This exercise improved my overall confidence in the process.

By the way, I mentioned yesterday that I had one figure with flash issues in the first box; the duplicate in the second box was fine, so I'll guess that problems are occasional and random with molds rather than systemic with particular molds.

After many months of waiting, my Reaper Bones Kickstarter package arrived yesterday.

Irene told me to smile maniacally, so I did my best. I spent about two hours unboxing and inventorying. It looks like I got everything expected, plus a few extra bits. Finding the painting time will be the key.

Some of the Bones are bent, so I am hoping to find time tomorrow to try the hot/cold reset technique.

Meanwhile, I still have Historicon preparations, and a delayed battle report from the 29th...