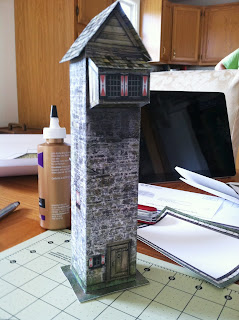 I picked up a batch of David Graffam PDFs over the weekend, and started playing around with them.
Posted by Rob Dean at 2:32 PM 3 comments:

As it draws to a close, I can safely say that it has been a busy gaming weekend. We had a regular meeting of the HAWKs on Friday, which I made an effort to attend. l was in a game of Musket and Tomahawk, which I had been wanting to try since I bought it last year (figuring that I was already well provided with all possible figures...). I'll reserve comment on the rules until I have time to run a game myself, but it was a fun evening.

I arrived home from the game to find that Norman and William had made it home, as planned, for a visit.

While this isn't a miniatures game per se, we did have access to miniatures, which I find saves a lot of time and explanation during a tactical situation. Additionally, we had one player Skyping in, so it made it simpler for hime to be able to see what was going on.

If you stood in just the right place, Steve on the iPad looked like just another player...

Having Skyped miniatures before, I was not surprised to find that this worked out well, and we look forward to another dungeon delve in the near future.

We didn't have a lot of time on Sunday before William needed to get back to school. Based on a thread on rpg.net, we set up the characters for a 1939 pulp(ish) roleplaying game using Fate Accelerated Edition, which I recently acquired and wanted to try out.

Today I finally got around to some painting.

This Reaper Captain Nemo from their Chronoscope series has been kicking around on my to-do list since last summer, so I decided to just finish it off.

I also did a couple of 1/72 Caesar fantasy figures (from their Adventurers box), making a Hordes of the Things hero stand

and a Hordes wizard stand.

I was having a little trouble doing closeup photography the easy way, but I'll let that stand rather than dig out the lights and tripod.

Back to work tomorrow...