For the Portable Fantasy Game, I built a half dozen or so building from Dave Graffam Modelsreduced to 65% of their original size. For home use, I have been wanting to do a few at full size for various games, but particularly for Song of Blades of Heroes on a 3x3 table.

I had some time to do that this weekend. Here are two buildings I've done so far, the Country House to the rear, and the Crescent Moon Tavern to the fron and right. I also finished off the Patrol Boat while waiting for glue to dry...it's been sitting half-built in the paper modeling box for a while. I had thought that I was going to add stone walls to the bases and give each of the houses a small enclosed area, but the Country House, in particular, was already on a base about 10" square, and a visually appealing fenced yard would have nearly doubled the base size (to 10x18 or so). I concluded that was probably more than I wanted for use on a 3x3 cloth. On top of that, there is the matter of the cubage for storage purposes. At least they are very light. I have some Fat Dragon models that are supposed to fold flat for storage on my to-do list.

I've got one more printed out, and the base flocking to do, and then it'll be time to put them in a game. 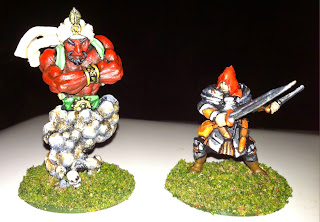 I finished off another pair of figures today. The dual armed fighter is one of the Reaper Bones; not one of my favorites, but I'm trying to expand my Song of Blades and Heroes warbands. The djinn is a Reaper metal figure.
Posted by Rob Dean at 9:41 PM No comments: 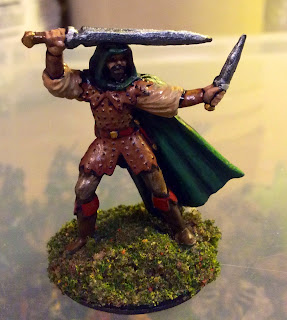 I managed to finish off one of the easier Bones today, so my annual total will be at least a little higher than I posted earlier this week.
Posted by Rob Dean at 9:05 PM No comments:

End of the Year Review

With the Christmas season upon us, I have been busier with baking than with painting. While the Christmas cookies aren't entirely done, here's a sampling of this year's types...

While I have a few quiet days between now and the end of the year, it's probably close enough to have a look at this year's numbers.

I have painted, according to my notes, 37 25/28mm figures (including some large fantasy monsters) for the fantasy skirmish project and for the Dux Bellorum Dark Ages project. I have also painted 62 1/72 foot figures and 4 1/72 scale mounted figures, almost all for the Portable Fantasy Game project.
Most of them have been blogged here over the course of the year.

I've been involved in running or playing 26 miniatures games (or sessions in the case of some days that saw multiple short games using the same rules back-to-back). The average of one game every two weeks isn't bad, but I should note that the distribution isn't anywhere near that even, due to the concentration of events during conventions. While that's below my theoretical goal of 52 games, I might also note that I was in 21 sessions of roleplaying games this year, in a major revival of one of my other gaming interests, which has been dormant for a number of years. Added together, that would come a lot closer to the goal of a game per week.

I made it to four multiple-day game conventions this year, Cold Wars, Huzzah, Historicon, and Gencon, which is a comfortable level.

Behind the numbers, it turned out to be a bad year for Charge! and the Not Quite Seven Years War. I haven't been in a Charge game last fall, and the attempts to schedule a Skype game with Ross have been disrupted by a variety of life events. It was also a bad year for blogging, with time beyond that devoted to actually painting and playing being a little hard to come by.

On the brighter side, it was a good year for old friends, with the convention visits being an opportunity to spend some time with them. It was also a good year for the Portable Fantasy Game project, as shown below, which got assembled to a solidly usable point before my Gencon goal.

My goals for next year, as I see them now, are to continue work on the Dux Bellorum project, get back to the NQSYW with both games and a few new units, and to decide on a path forward for the mass of fantasy figures which Kickstarter has kicked out at me the past two years...