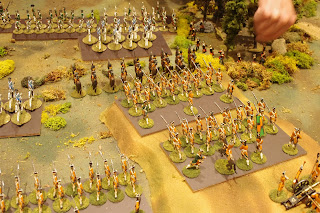 After forcing back the Alliance army in the second scenario, the third opened with the Coalition Army poised to sweep aside a thin covering force consisting of the understength survivors of the Stanzbach-Anwatsch infantry, a single squadron of Allied dragoons, and a couple of guns.

Coalition forces were informed that they were experiencing command difficulties, with the Wachovians restive after receiving heavy casualties in the earlier actions, which the Prince Palatine did not feel advanced his own agenda. "My quarrel is with Rosmark and North Polenburg", he remarked. A Fredonian regiment had arrived to augment the Coalition advance as well, requiring additional coordination.

Unfortunately for the Coalition, the Alliance commander had pulled off a coup; the missing regiments of the North Polenburgers were discovered at dawn, positioned in attack formation on the left flank of the Coalition army. Doubtless the Wachovian Hussars, seen above just before being ridden down by the North Polenburg dragoons, had been unable to scout adequately due to the need to reorganize after the previous encounters.

Lady Sarah's Robins, the Stanzbach-Anwatsch light infantry (seen above in fighting positions at the woods edge) received a special mention in dispatches. They seemed to be everywhere on the field, and maintained a galling fire against the flanks of the Coalition forces which contributed greatly to the ultimate Alliance victory.
Posted by Rob Dean at 9:41 AM