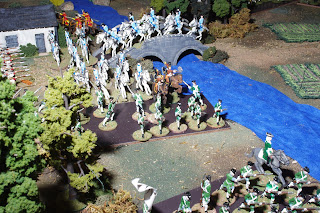 The first game in our three game NQSYW was played last night. The Historicon venue this year does not have the best acoustics, and I found that I spent most of my time scurrying around the table so that I could hear player questions, and both photography and my grasp of the big picture of the action suffered as a result.

I chose Scenario 10, The Important Bridge, from the Red Book, C.S. Grant's Scenarios for All Ages, as the first game. A Pragmatic Coalition force of three infantry regiments, a cavalry regiment, a (Wachovian) hussar squadron, a light infantry company and two guns attempted to sieze a bridge from a similarly sized opposing force, here represented by a Northern Alliance mix of troops from Stanzbach-Anwatsch and North Polenburg.

I am amused by how often these imagi-nation troops fight true to form, regardless of whether their commander knows their history or not. In the shot below, the dashing Wachovian Hussars have their moment of glory, charging into the rear of a mass of infantry from the N-P Hawks regiment, only to be charged in turn by the 32nd N-P dragoons. Their horses may be showy but their saberwork needs more practice, since they were defeated in the resulting melee. In fact, they had a perfect night, losing every melee in which they were involved. Unfortunately for the brave hussars, they had nowhere to go, and were caught by reserve infantry while rallying and reduced below strength.

Eventually, after ferocious casualties on both sides, the Pragmatic Coalition forced the bridge and broke the morale of the oposing commanders, who elected to withdraw. It is probably a good thing that I wasn't planning on actually linking these scenarios with carryover of casualties; there wouldn't be much left for the follow-on battles.
Posted by Rob Dean at 8:48 AM