I took an extra day (Thursday) off from work to add to my usual compressed work week Friday off, and spent more of it painting than I had been able to do in a while.

I posted pictures of the 40mm Prince August figures previously. In addition to those I finished, I also cleaned and primed another dozen or so, most of which fit into existing groups. (For example, we have four red-coated artillerymen from various scavengings, so I am working on two more to give a standard six.)

The NQSYW work has been motivated by Historicon; I'm running three games, and it would be nice to have at least a few new troops. Other participants have been at work as well:

My son William has been finishing a company to round out his first regiment, whose colonel is seen above.

There may be more by game day...

Meanwhile, with all that leisure this weekend, I decided to try a few other things.

I finished off a scenic piece

of mini Easter Island stone heads, acquired during the Borders close out the other year.

As long as I was painting samples of 40s, it seemed like a good time to try some 1/72 scale plastic Persian samples. I have a longer post about this project in mind, but meanwhile, the first figures:

I have also been intending to do some Caesar fantasy adventurers to support Norman's plastic fantasy project. Here's the first of them:

Lastly, Norman is running two Bronze Age games at Historicon, and I promised him that I would dig out two chariots whose components I finished months ago, and get them assembled and based. 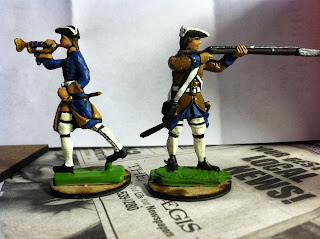 As long as I have NQSYW on my mind, I've been noodling around with a few other figures. The bugler on the left is in the uniform of the Schoeffen-Buschhagen Schultheiss Regiment, and will eventually be an extra in the regimental HQ group. The figure on the right is a sample of the S-B city militia.
Posted by Rob Dean at 5:39 PM 3 comments: 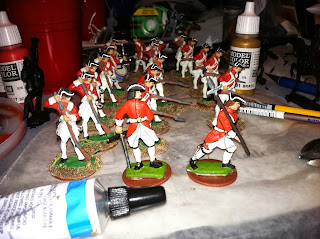 I've been working up the last mostly full company (in Charge! terms) of the mercenaries acquired at Cold Wars back in 2011. These guys needed only some retouching, plus the officer and sergeant seen in front.

After careful consideration, I decided not to try too laboriously to match the painting style, but did go for the closest color match I could get.
Posted by Rob Dean at 8:52 PM 2 comments: