My elder son Norman came up for a visit including some gaming last weekend.  It was the monthly HAWKs Ghost Archipelago day, so we had that game in the morning, but we also set up a 40mm Renaissance game in the evening.

Ross and I are planning to take 40mm Renaissance to Huzzah again next year, so we found time for a "Skype" game a couple of weeks ago (actually Google Hangouts these days) and considered the state of the rules.  After discussion, Ross decided that he liked the rules we had used at Huzzah in 2017 well enough, so that's the version I dusted off for the this game.

I was also considering the question of whether I could run a game at Barrage for four players.  A few posts back, I showed a picture of my full inventory of figures.  With about 50 stands of troops, each player would get a dozen or so, and this game convinced me that wouldn't be enough to keep things interesting.  Norman and I ran this one in under two hours with nearly everything I own (less some artillery) on the table, and it was still pretty fast.

Here is the table set up:

And from another angle: 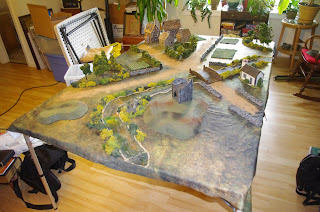 We put this on the Alpha Gaming Table (4x6 feet), and it worked fairly well.  We are setting up to move, so the house is full of boxes of stuff being packed, unpacked, sorted, thinned, etc.  That left the gaming table surrounded by some rather tight clearances, and we bumped it a few times.  Being light for transport also translates into being subject to bumps, but we didn't hit it hard enough to bring down the trees, so that was acceptable so far.

I improvised the scenario; as we have used before with the rather generic forces available, we are in the fictional land of Arden, where the usurper Duke Frederick is attempting to seize power from his brother, the rightful Duke Senior.


As can be seen from the diagram, Frederick's forces entered along a road in two groups, a cavalry group leading followed by an infantry group, with the objective of taking the town.  (The town buildings, by the way, are some Fat Dragon Ravenfell fold-flat structures.)  Duke Senior's forces were an advance guard holding the area with shot, swordsmen, and a cannon, with cavalry and infantry reinforcements expected.

The usurper's forces soon ran into the defenders, and their light horse was unable to make much progress.

The Duke's cannon was firing with good effect down the road, and Frederick order his light lancers to take it.  Unfortunately for them, the cannoneers had time to load a charge of scattershot, and broke their charge. (Melee roll went against the horse.)

By this time, Duke Senior's horse had arrived on the scene, and a cavalry fight raged up and down the road between the enclosure at the edge of town and the fields to the north.

The Duke's foot arrived from the north shortly after that, and crossbowmen  lined the river bank to shoot with good effect into the masses of the usurper's advancing pikes.

Recalling his objective, though, Frederick sent his swordsmen and some extra shot around to his left in a bid to take the town.

They were met by Duke Senior and his gendarmes.  Upon seeing the situation, the Duke decided that running down the foot and leaving Frederick with his lancers to their rear was not a good plan, and charged the usurper in a bid to clear the cavalry with the intent of turning on the foot afterward.

Unfortunately for the Duke, the cavalry fight did not go well.  Frederick had the advantage, and the Duke attempted to save the situation by joining the fray personally.  He was unhorsed, and, with their leader down, the remaining horse fled the field.

With that, there was nothing but a handful of shot in the enclosure which could dispute possession of the town with the usurper's foot, a task for which they had little enthusiasm.  They too withdrew, and night fell over the battlefield...

We got in about ten turns and the battle ran up and down the length of the table, so it felt pleasantly active for a game.  I noted, however, that I would need more pikes (a lot more pikes) before I could reasonable stage a multiplayer game out of my own resources.  This project originated as two Armati "introductory scale" armies, and I ended up with a relative surplus of cavalry stands when they were rebased onto the 60mm square bases.  Some painted figures have fallen into my hands from gifts and flea markets, but they have all been swords and shot, so my collection still has the look of a couple of advance guards.

I'm still hoping to get some additional pikes painted up this fall and winter.

Sometimes it seems like everything in life is set on "fast forward".  I've been in that mode for months, always hoping that there would be a day when I was decompressed enough to stop and think about things for a while.  Today, it seems, is finally that day...

I unloaded the notebook in which I keep the current log of my miniatures games from my briefcase in  late March, so I spent some time this morning combing through photos, notes, and posts on the Reaper Forums to reconstruct the games I've been in lately.  I was a little surprised to find that I have managed to be in 24 miniatures games so far this year, despite the frantic pace of things.  I won't get anywhere near the usual annual goal of 52, but it looks like I shouldn't have any trouble meeting my minimum goal of 26, given that a Ghost Archipelago game is scheduled in two weeks, and the HAWKs will be running our Barrage mini-convention at the end of the month.

William was in for a visit (from grad school at the University of Michigan) two weeks ago in conjunction with a friend's wedding, and I took a day off from work to spend some time with him.  Because we are moving relatively soon, he was digging through his stock of possessions remaining here, including his 1/72 plastic Hordes of the Things armies.  Between that and the couple of stands I had recently finished off during a business trip, we decided to unpack some scenery and play a couple of games.  I was using my Airfix Robin Hood-based medievals, and William was using a mixed bag of El Cid figures and Arabian Nights.


We split the two games one and one, with the flying carpet resulting in the destruction of my new nights in one game, and being ignominiously blown out of the sky by a spell in the other.  It was good to get the figures on the table, but we did discover that we were a bit rusty on rules mechanics, especially when it came to what to do with blocks of spears two elements deep.

After Gencon, I started playing around with the custom figure design systems at Hero Forge.  I picked up a free sample figure last year, which looked pretty good, so I wanted to try something.  I have been reading an urban fantasy series called Bordertown recently, and decided that I would work on some fantasy-flavored moderns.  Here are the two samples I ordered, as received, a modern bard (with a violin) and a suit-wearing spell caster with an umbrella. (Actually an umbrella sword, but concealed...) I have no idea what I am going to use for rules, so I have been resisting the temptation to order any more until I actually have a game of some sort organized.  I'll post a picture when I have them painted.
I also recently finished up a single 1/72 scale figure as a hero stand for my Portable Fantasy Campaign Cold Islander army.  1/72 plastic is, of course, very practical for a variety of reasons, but I'm not always inspired to paint it.  I don't like to disrespect the Muse, though, and since that's what she led me to last week, I just said "works for me" and carried on.

It would be easy to argue that I have too many projects going on at the moment, but I don't really want to address that right now, so I am trying to just paint and play some games rather than spend too much time on "should" and "ought to".

In pursuit of that, I have also recently invested in an Alpha Game Table, a 4x6 foot single piece unit which folds up into a 48" by 18" by 9" package.  I don't know how durable it is going to provide to be, but I will post a full review once I've lived with it for a while.