This past weekend would have been the time for our (now) annual trip to Gencon.  Of course, there was no chance that 65,000 of my nearest and dearest as-yet-unmet friends were going to be packed into the Indianapolis Convention Center for a super-spreader event in this Year of the Plague, so it was cancelled by the organizers.  However, the organizers were not willing that the gaming world should remain entirely isolated and alone, and set up Gencon Online.
My brother and I had been planning to run four or five miniatures games as our usual contribution to the festivities.  While I have now played a lot of 1:1 remote games, I would need to improve my technical skills before I volunteered to run a game over any network system for 4-6 other players, so we did not try running anything.  Happily, other more technically-adept gamemasters did step up, and I ended up registered for three roleplaying games and four seminars.  I had already cancelled my planned vacation time for the week, but I added a Friday off back in to the schedule after the events registration happened, as I found myself with a four hour session of the Prince Valiant RPG running from 8:00PM to midnight, which would have made work the next day dicey.
So, with fairly low expectations, I signed in to watch the opening ceremonies on Thursday during my lunch break, and then logged back on to play the Prince Valiant game in the evening.  Gencon set up a Discord group (??—I don’t have all the Discord-specific jargon learned yet) for the convention.  This had the effect of providing a discussion area which felt a lot like roaming the halls of a convention striking up random conversations with previously-unmet gamers.  I spent the next three days cycling between the games and the Discord chats.  Overall, it was a positive experience; much better than I had anticipated. Was it as good as going to the physical convention?  No, of course not, but it was a lot better than sitting around on my couch feeling sorry about all the gaming I’m not doing this year.  I’m sure we all hope that next year will be better, and that our convention will occur, but, if they don’t, I feel better about there being something fun to look forward to.
The convention was spread across nearly every platform I’ve ever heard of.  I was on Zoom, YouTube Live, Discord, Twitch,  and Roll20 that I recall.
Here’s a screen shot of my Friday afternoon RPG, a Fate Accelerated/Masters of Umdaar (science fantasy; think Thundarr the Barbarian), using Roll20: 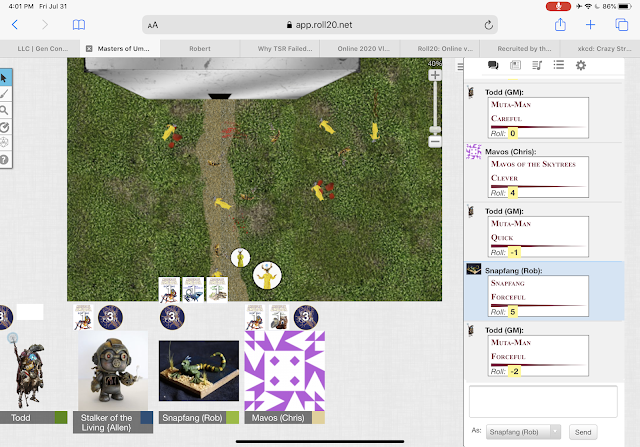 The
The gamemasters for the RPGs had to double as technical consultants, since all three of the games I was in experienced some technical glitches.  Nevertheless, RPGs translate fairly well to the online format, so they were fun.  The third game, by the way, was a session of Monster of the Week, a Powered By the Apocalypse game of team monster hunting (think Buffy or Supernatural), and was run by a staff member of the Critshow podcast.  That was the best of the three that I played, though all were good games.  I may have to make some time for an online RPG game again.  (I was in one for a while back in 2014, which was a good game, but it eventually folded and I was too busy to worry about replacing it.)
Most of the seminars I attended were not germane to this post, but I would note that I was particularly interested in one titled War at the Table, on bringing some reality-based military considerations to your tabletop RPG.  Any discussion that cites Tony Bath’s Setting Up a Wargames Campaign, the Anabasis, and Doyle’s The White Company is off to a good start, from my point of view. They did stop short of discussing how to integrate miniatures battles into an RPG campaign, though, which I would have enjoyed hearing about.
Being unconstrained by physical space, the convention ran a couple of hours longer than the live version, and wrapped up with closing ceremonies at 7:45PM on Sunday.  If I had realized that I was going to be as involved as I was, I would have taken Monday off as well. (However, a work crisis loomed, so I’d probably have been called back anyway.)
There were a few less good parts.  The virtual dealers’ hall didn’t have the same opportunity to see something unexpected that you get wandering around physical space.  Miniatures related events were slim indeed.  There wasn’t an auction, and I still had to deal with cooking and laundry and the like, which would be outsourced  or ignored during a normal vacation.  As I said before, though, overall I was very happy with the experience.
Since I was missing miniatures events, my older son suggested that we do our own speed paint challenge, so we each chose a primed Reaper Bones figure, collected up a 12 color limited palette (black, white, grey, brown, caucasian skin, blue, green, purple, red, yellow, metallic silver, and metallic gold), and two brushes. We were generous to ourselves; we put 60 minutes on the timer, set up a video chat link, and started painting.
Norman chose to paint this female gnome warrior: 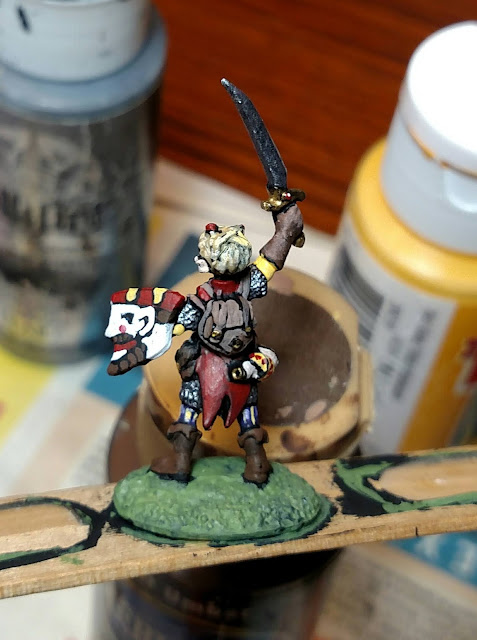 I’ve chose the rear view here, to show off his shield.  The flat shield on this figure gave him the opportunity to highlight his freehand skills. 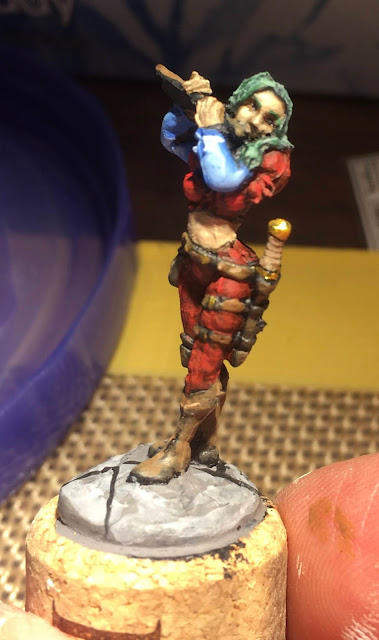 I chose this flute player.  As with any speed paint, high magnification is not the kindest view.  I ran short on time before I could start striping her trousers or sleeves.  Viewed at normal gaming distance, it’s been growing on me since Sunday, but overall, I’m confident that he would have placed higher.
I hope to get a little more painting done soon.  There’s nothing like a speed paint for breaking the ice and whetting your appetite for more painting.
Posted by Rob Dean at 7:04 PM 2 comments: