A Shortcut to Mushrooms, as fought

William and I sat down to fight the encounter yesterday. Unfortunately he needed to get back to his summer job, so we rushed a bit and I didn't take as many pictures as I had planned.

William took the elves, and I took the goblins. After one false start, in which the entire group of goblins entered on the mushroom grove side of the stream and were unable to catch the fleeing elves, we started over, dividing the goblins into three groups and randomizing the entrance for each group. I ended up with one team of two goblins (one an archer) and a wolf entering near the mushroom grove, and all of the other figures entering near the boat.

I decided that I would try to use one wolf to attempt to reach the ford on the boat side ahead of the elves, and sent a few goblins to back him up. The rest of the goblins made an (abortive, as it turned out) rush for the boat, hoping to overwhelm the three boat guards.

The raiders attempting to reach the boats were swiftly shot down by the carefully aimed archery of the elves.

However, one wold did reach the ford ahead of the elves, and stood blocking the exit. An elvish guardsman came forward to scuffle with him, the princess crowding close behind.
After dispatching the wolf on the grove side of the stream with a well-aimed arrow, Orman the hero ran to assist the guardsman. Unfortunately for him, his uncertain footing in the stream was his undoing, and the wolf swiftly ripped out his throat...

Gamely, the guardsman fought on, but the fall of the heroic Orman must have unnerved him, as he too was slain in turn. At that point, the princess fled back to the safety (?) of the grove, pursued by the wolf. Hearing her cries for help in the distance, two of the boat guard leapt from the boat and raced toward the ford. The fall of another goblin put the raiders below half strenght, and their morale was not good. Two more goblins fled immediately rather than face the wrath of the avenging elves, and the wolf released the princess and fled as well.


The princess hurried across the ford, only to be accosted by the one remaining orc. With a swift kick, she drove him back for long enough to resume her flight to the boat.


The two guardsmen turned on the orc, and swiftly lopped off his head. With that, the remaining goblin and the wolf fled, considering it a moral vicotry that they had brought down a hero of the elves, even if the princess did escape unscathed with the mushroom spores.


Overall, it took a little more than an hour to play out. We remain confirmed in our view that the SBH point system does not really balance two forces of disparate quality. The goblins were never able to achieve enough activations to make good use of their superior numbers, so a balanced version of this scenario would probably require more goblins, even with the elves' relatively difficult tactical situation. The mechanics give a nice fast game, though, so developing a tested scenario library would probably be the way to go.

A Shortcut to Mushrooms, Preview

I'm attempting to take advantage of a visit by William to get a few of the recently painted figures on the table. Therefore, I've set up a little encounter this morning between the elves and the goblins. The Rules will be Song of Blades and Heroes. Past experience has shown that the quality rating 2 troops, such as most of the elves, seem to be under-costed in the point system, so my thought today is to give the elves a problem.

So, the elves are sailing down the river, when they note that a special mushroom has popped up in a mushroom grove not too far from the river. Putting their boat ashore at the only practical landing point nearby, they leave a guard with the boat and send a team with the princess to collect mushroom spores.

Here's the order of battle with SBH ratings and abilities:

For deployment, the elf player will split his figures between the mushroom grove (A) and the boat (B), after which the goblins will roll to see where they enter. The stream is impassible except at a ford (just left of the nubmer 5 below). The goblins can capture the princess by defeating her in melee, after which she can be moved at slow speed by the goblin player as long as accompanied by a goblin. More goblins will arrive eventually, so they can also win by killing or driving off the boat guard and firing the boat.

We'll see whether that seems too easy or too hard after a run through.

The boat, by the way, is a Dave Graffam paper model.

In anticipation of Gencon, and of the eventual rerelease of the Ral Partha Collector Series fantasy armies, I have been combing eBay for a starter batch of old elves. I posted the first three wood elves a few entires back. I finished the next nine last weekend. I was a little delayed by the need to wait until it stopped raining for a day or two before I could spray the final varnish coat on them. So I had 20 or so figures ready by the time the weather finally cleared.

These sea elves are the vanguard of a force of about 25. I've got five more elves with greatswords primed and ready to start. That particular figure is not part of the first wave rerelease, so I'm going to be limited to what drifts in from eBay. I've got 11 elves with lowered pikes (i.e. front rank) in progress, with some hope of finishing them this weekend.

I've been interspersing the unit blocks with a few individuals, like the princess posted last night. The "Earth Demon" looked like he would be acceptable with a farily simple rock scheme, so here it is. (Original catalog identifier: ES-45.)

I've got one more figure I want to finish before I run a little elf/orc skirmish with Song of Blades and Heroes for a bit of encouragement.

Speaking of orcs, by the way, I've accumulated a lot of the Collector Series orcs from eBay, including a handful that were almost painted acceptably. I decided to go ahead and do a quick rehabilitation job on those, basing them like the rest of my figures and touching up the paint, particularly evening out the orcs' skin tones to something closer to what I intend to use when I tackle the never painted figures. 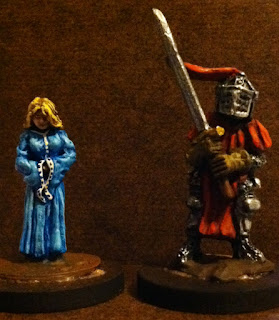 I've been working on some classic fantasy figures; here are a Ral Partha elf princess and a Heritage knight.
Posted by Rob Dean at 8:10 PM 5 comments: