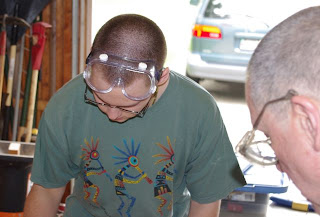 My older son at the mold clamping station
This is the third year that we have had a group casting day for expansion of the NQSYW project.  We met on Saturday, 29 May, at Duncan Adam's house.  We had a fairly short list of things wanted by other HAWKs this year, so we felt comfortable working at some length on some antique farm animal molds (with some success), to fill out the scenery and background a bit.  (I wish Prince August would release a mold of civilians ... ) 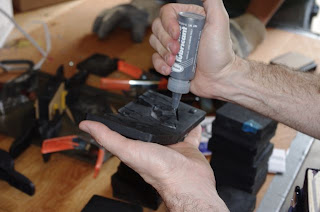 Using powdered graphite for mold release
We eventually cast about 40 cavalry figures, a couple of artillery pieces and their gunners, some figures to convert as engineers, two dozen farm animals and farmers, and a couple of dozen assorted infantry not amounting to a unit.  It looks like some ad hoc casting is in the cards. 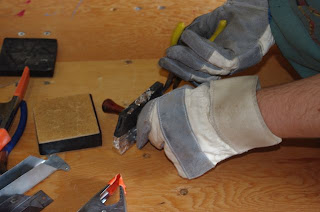 Carefully extracting castings from an antique farm mold
The Arden game is still on the table...it's rough when you can't find players for your solo game.
Posted by Rob Dean at 9:06 AM 1 comment:

I dislike it when things get so tight in my schedule that I have no time for relaxation.  I have had the Arden game on the table for three weeks while I was occupied with business, both first and second jobs.   I finally got in the next three turns Sunday night, and took a few pictures with my new camera.  One more session should finish it, and I'll post the final report then.

I was pleased to find that I probably do have enough troops to make a reasonable two player game, and the Prince palatine of Wachovia will be home for the summer at the weekend, so opponents will be easier to come by.
Posted by Rob Dean at 4:28 PM No comments: