I did a little painting over the weekend, working on a couple of Reaper Bones figures and some Zvezda 1/72 Persians, at no great speed, but I'm also moving ahead with the rebasing effort.

I'm starting to redo all of my 2004-2005 vintage HaT Romans and Carthaginians onto Masonite. The kids and I have been using this for all of our 1/72 fantasy armies for a while. I'm also adding a flex steel layer to the bottom, so they will stick firmly to the boxes for transport.

With the French and Indian War figures all rebased, I've now got the balance of this project and Medieval Mayhem to go. After that everything will be on 'permanent bases' (and magnetized) and I don't intend to go through this again.

I also am splitting the rest of my Sheriff and Robin Hood figures off their penny bases, which is a bit painful. They'll be collected into fantasy along with the first group I rebased a couple of years ago.

Reminder to self: write the rules to match the bases!

The Fight at Athelric's Farm


Snorri's crew knew that it wasn't going to be an easy day. Somewhere in eastern Northumbria, they had lost track of the rest of the raiding force, and hadn't found anything worth lifting.
Things started looking up as they found and followed a track, which shortly led to a stream they could probably follow back to the shore. Moreover, ahead they could see the smoke rising from a small cluster of farm buildings...and cooking smoke, not the sort that would suggest that other Vikings had gotten here ahead of them.

Unfortunately, their arrival was heralded by the shouts of a local, who leaped up from a hiding place and dashed across the ford. A local herdsman quickly flung a rock, dropping one of Snorri's two bowmen in the waters of the stream. The other hastily shot the running local, before noting that it was just a boy.

The Saxons rapidly started to round up their flocks, and the men grabbed their weapons with the intention of making a stand, at least for long enough for the women and animals to flee.


As the Vikings crossed the ford, the farmers hastily formed up in the lane, between the hedges, where it would be difficult for the Vikings to get around them. Ragnar Eagle-Eye slew a sling-armed herdsman with an arrowshot. Ahead and off to his left, Snorri could hear a Saxon horn in the near distance. This was going to be tougher than he had hoped; apparently help for the farmers was nearby. The Viking raid must have the whole countryside abuzz.

As the Vikings came around a corner in the lane, they could see a group of frightened farmers trying to make a stand. Ragnar slew one with a hasty shot, and the rest of them fled. Meanwhile, Snorri waved one of his followers toward a slinger hiding behind the hedge to the right, but the man hesitated.

The farmers, except for one who didn't stop at all, did not run far. Thinking of their farms, and hearing the horn of the approching thane and his men, they turned to face the oncoming Vikings again. Pointing at the slinger, Snorri yelled, "Ragnar, slay this troublesome farmer!" Another shaft reached out, and the luckless farmer dropped where he stood.

A couple of Snorri's men crashed into the line of farmers at the gates in the lane. Two farmers fell and the third fled, but a lucky spearthrust slew a Viking. Ragnar, crossing a field to the right of the rest of the crewmen, saw a herdsman attempting to gather his cows to flee, and shot him before he could get them all moving.

Meanwhile, Godric the thane and his fyrdsman arrived on the scene. Hoping to take the Vikings by surprise, Godric led half of his men toward a low spot in the hedge, hoping to get into the land behind the raiders. He waved the rest of his men toward the gate by the farm's well. However, lacking their leader's drive, those men hesitated to attack the Vikings. Meanwhile, Godric himself was met by a Viking with a two-handed axe as he reached the hedge. While both fighters were hindered by the hedge, the Viking's longer axe gave him the advantage, and Godric fell beneath a mighty stroke.

Up at the gate, Snorri spurred his horse at the hesitant fyrdsmen, brandishing his spear. They promptly fled. Ragnar, finding himself alone in a field of cattle, started rounding them up, along with a woman and child he found at the house.

Snorri sneered at the Saxons, who ceased fleeing, but hesitated to face him. He was joined by two of his companions, as Axe Harald leaped after the followers of the slain thane, who took one look at the dripping axe and the Viking's grim visage and fled back down the lane toward the ford.

Snorri and his men found themselves in a sharp fight at the well. After an inconclusive series of exchanges of blows, Snorri and a follower suddenly cut down two of the six Saxons. The fighting was intense, and when it suddenly ended, all six of the Saxons were down, as was one of Snorri's crewmen, and Snorri himself had been the victim of a lucky Saxon spearthrust.

One farm family and their animals had fled, but Ragnar had rounded up the other. Only one fyrdsman remained, and he did not fancy his chances against four hale Vikings. As the action ended, Ragnar, Axe Harald, and the other two Vikings lifted their leader's limp body onto his horse, uncertain whether he would live or die, and rounded up the cattle and the two new thralls to resume their race to the ships, pausing only to torch the farm buildings in reprisal for the loss of their leader...

Overall, this was an exciting little game. I used Knights and Magick, without the "magick", using some of the optional rules for very small encounters. I had eight Vikings on foot (two with bows) and a mounted leader against about a dozen Saxon farmers and another dozen fyrdsman. In K&M terms, the Viking leader was the only A class warrior, with the thane and the rest of the Vikings as B class, the fyrdsman as C, and the farmers as D. I didn't add up the points but just eyeballed the balance. It ran ten turns and took me about two hours to play, including taking enough notes to do this battle report.

There has been an interesting discussion of rpg collections on rpg.net (http://forum.rpg.net/showthread.php?678709-Your-minimalist-RPG-collection), so here is my theoretical one shelf collection. Pardon the brief digression from miniatures, please! 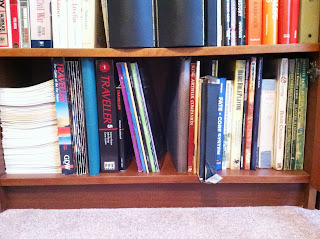 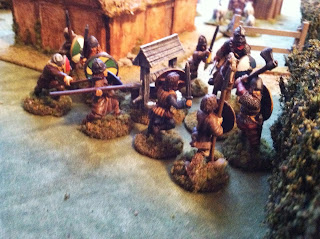 I finally had time to play my solo skirmish game this morning. I hope to have a battle report up later this weekend.
Posted by Rob Dean at 11:49 AM No comments: 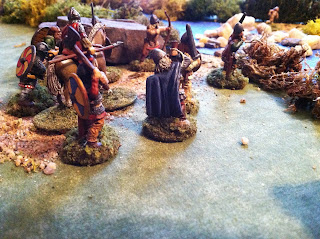 I set up a Viking skirmish this morning, which I hope to play out sometime in the next evening or two...
Posted by Rob Dean at 1:03 PM 2 comments:

That's why there are play tests...

As I mentioned in the previous entry, we set up our two banquet tables in the family room on Sunday, on a temporary basis.

We set things up in about forty minutes. The scenario was based on #44 from the Green Book. I only have two cabins handy, so the little settlement of Richardson's Ford consisted of them and a stockade.

A raiding party of about 40 Canadians and Indians, in three groups, descended on the settlement intending to burn it, and capture or kill its inhabitants. Figures on red poker chips were encumbered by incendiary tools.

I chose to try this using Musket Mayhem, the black powder version of our medieval skirmish home rules.

It turned out, after several turns, that I had failed to consider that the rules as written made it impossible to hit the defenders of a fort or loopholed cabin at long range. Therefore, in order for the scenario to work, some sort of covered firing positions within close range of the fort were needed. There were a few other scenario fixes that could have been made, but Norman needed to be on the road before traffic got bad. We therefore decided to pack it up and try again another day...I'm glad we did this at home, though, and not in front if an audience at a convention!

At least the figures look nice in the pictures. I shall hope to have them on the table again soon, in a more balanced situation.

We just had a new floor installed in the family room.

While its main purpose is to enable some home ballroom practice, it has a second benefit. We needed to clear the space to dance, so there is now somewhere to set my tables up again, although only on a temporary basis.

This morning we have a French and Indian War skirmish set up, based on scenario 44 in Scenarios for Wargames.

Things are quiet in the settlement this morning...

...but danger lurks nearby.

According to my records, none of these guys have been on the table since Cold Wars 2008, which is a waste. So, time to remedy.

Since that was pre-blog, I'll note that the figures are an eclectic mix of 40s, with some Irregular, a few Sash and Saber, some Prince August home cast, and some Meisterzinn multiple part home cast. There aren't too many of that last today; Meisterzinns make up most of my regulars for this project.