I have been in the habit of attending Huzzah, in Portland, Maine, for several years now.  This got started when my friend Ross Macfarlane had been unable to make it down to a Cold Wars for a while, and suggested that we meet somewhere halfway between his home in Nova Scotia and mine in Maryland.  It's a twelve hour drive for me, or a relatively short flight, which seems like a long way to go for a local convention, but between an opportunity to stage games with Ross and the fact that the Maine Historical Wargamers put on a great show, it's worth it.

This year I had planned to fly, so Ross and I ended up deciding to run a Dragon Rampant game, using my portable 1/72 scale plastic fantasy set.


I've been working on the 1/72 scale plastics a fair amount this past year.  For air travel, they have the advantage of being light enough to carry around, and also light enough that the bases stick to the magnetic travel boxes very firmly.  The configuration shown above was from the Detroit trip mentioned in the previous post, and I had to dismount the top box to get it jammed into the overhead compartment.  This time, I left that at home and just brought a 6 liter box with three war bands worth of troops (about 35 60mm x 40mm bases) and the 12 liter box with support gear such as scenery, dice, tokens, and rules.  I had some curiosity from the TSA agent boarding in Baltimore, but no problems.  Norman showed up with a fourth war band and some spares in a 4 liter box, so we had two thirds of the game in hand.

My older son, Norman, elected to come up with me this year, so I met him at the airport on Friday morning, and we had an uneventful flight to Portland, arriving at the hotel and convention venue around 10:30.  Huzzah has elected for easy planning, and has each day set up with gaming time slots, so that there are two on Friday, after lunch and after dinner, three on Saturday, one after each meal, and one on Sunday, after breakfast.  I have not typically had much problem getting into games, but apparently Huzzah is getting to be more popular, because most of the games were fully signed up throughout the weekend.  As a gamemaster, I was registered and had a badge, but I hadn't gotten around to signing up for anything in particular.  I did a quick search through the registration books and found a few open things, which is how I ended up playing in a 1973 October War tank game using "picoarmor" and the Spearhead rules, an old set by Arty Conliffe.  I was reminded that Arty's design philosophy was that commanders were constrained in their abilities to control events, so, like Armati (his ancients rules), Spearhead seems really designed to be a two player game.  There aren't really enough decisions to spread them among multiple players.

I elected to take the Syrians, which turned out to be functioning in the role of ducks in a shooting gallery.  The Israeli Centurians were effectively indestructible, so it wasn't my best game of the weekend.

Ross and I neglected out "best practices" handbook a bit this weekend, mostly due to my real life being a bit hectic recently, so we had not staged a trial game of Dragon Rampant by Skype beforehand.  Therefore, when he proposed that we should do a warm-up game in the Friday evening time slot, it seemed like a prudent idea.  We recruited a few other players and grabbed an empty table for a simple head to head slog between the six war bands we were using for the morning game.  As a result, we made some pen and ink changes on the hand out sheets; for unfamiliar players the terminology used by the game seems to be difficult to pick up.

Ross had originally proposed that we use Scenario 10, The Alliance, from C.S. Grant's Programmed War-games Scenarios as the basis for our Dragon Rampant  game.  After the Friday night test, I was generally unworried about the scenario; the game tends to be a little swingy anyway, so sticking to scenario victory conditions was unlikely to be a main concern.

We modified the rules for multiplayer games by using side activation; each of the three players on a side got to act until a unit failed its activation roll, after which play passed to the enemy.  We issued each player three reroll tokens, good for an activation or morale roll, so that they had some luck mitigation available in the event of bad rolls.  Nevertheless, this game does work better as a two player game, and six is pushing the upper limit of what can remain fun.  As Ross noted, the point values are approximate, and I'm not sure that our war bands were actually balanced as intended.  On the barbarian right flank, for example, 30 points of Cold Islanders with "bellicose foot" (essentially berserkers) were unable to make any headway at all against a 24 point war band of Robin Hood-Style archers and scouts.  Nevertheless, the players seemed to be enjoying the game, so we'll call it a success and plan better next year.

I had the tables turned on me, as it were, in the afternoon session when I found myself appointed commander of a Saxon force in a six player Saxon/Viking Lion Rampant game on account of my familiarity with the rules.  I was able to get in a few solid attacks with my household mounted force, but, on the whole, the Saxon fyrdsmen seemed to be outmatched by the ferocity of the Vikings.  The gamemaster used a similar concept to the reroll tokens, except that he gave out two per player and they were automatically worth a successful roll.  As with my game, six players seems to me to be about the practical limit for any game in which players are acting approximately one at a time.

After a leisurely supper, I was invited to play in a pick up game of Osprey's Honours of War, which I picked up on speculation a while back (as I already have figures) but which I hadn't read.  This was hosted by Al Coughlin, using 54mm figures from Accurate and All the King's Men.  I do love the toy soldier look of the big figures on the table, but the rules were probably not anything that I see using in the future.

On Sunday morning, after the traditional breakfast at Cracker Barrel (next door and an easy walk from the hotel), we ended up doing a reprise of Ross's Friday game, a 1914 scenario using home cast 40mm figures and a gridded map.  I'm not a big fan of gridded maps, but I think that has more to do with not wanting to fuss with constructing one than the actual games.  I took the Germans on the offensive against my son Norman's French and British.  Apart from some success on my right flank, where I was able to push my scout cavalry and bicycles up through the woods, attempting to attack the redoubt in the center of the board was a costly mistake.  It needed a lot more artillery preparation, and I see how WWI offensives ended up starting with weeks of bombardment.

I managed to avoid most of the shopping for the weekend, spurred on by the knowledge that everything had to go back with me as a carry-on.  I did end up picking up a few books from the flea market, something on the 30 Years War, something on the Ottomans in the 16th and 17th century, and a copy of the old WRG guide to Armies of the Greek and Persian Wars, one of the few I don't already own.

Ross and I agreed to work toward a 16th century game using our 40mm collections again next year, so I guess I am committing to driving next time, as that project won't pack in flying luggage very well.  I decided it was time to add to my mold collection for the period, and ordered some sample Landsknecht molds from Berliner Zinnfiguren, which carries a range from Artidee/Creartec, while I was sitting at the airport waiting for our return flight.

Overall, it was a fun convention, as always, and I am looking forward to next year. 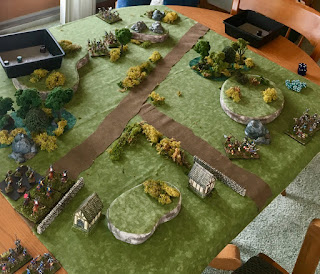 I still need to write up a proper battle report, but a game in the Northlands campaign was fought today using the Dragon Rampant rules and the travel miniatures box.

As seen here on the left, the Count of Rienne was surprised by a Cold Islander raiding party during an attack on the province of Rienne. The Cold Islanders (right and top) caught the Count on the road home. His bravery was never in question, though his good sense was. Leading from the front turned out to be his downfall. Survivors of his retinue were led to safety by Adelle, the Blue Sorceress.

The victory was not without cost for the Cold Islanders. Their leader, Olaf Longhair, Thane of High Valdland, was captured by the Count's foot guards, and most of their forces were dispersed and would need time to rally...
Posted by Rob Dean at 8:35 PM No comments: