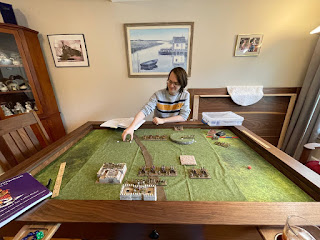 Elder son Norman and his wife came up for the weekend. We played a seven game DBA mini-campaign using our 1/72 scale Bronze Age collection yesterday...more to follow, but it was good to have a face to face game.
Posted by Rob Dean at 12:54 PM 4 comments:

I ended up taking two business trips last month.  I did actually take my painting kit along on the first one, and painted a couple of 1/72 scale plastic figures for the Portable Fantasy Campaign.  I still don’t have them based, though, so pictures will follow sooner or later. I ended up using my available free time to think about how I would go about reviving the original Dungeons & Dragons campaign.  Having looked at my old materials, one of the things I would particularly like to do is to update the map of the town of Stoneharrow.
According to my Amazon records, I received my copy of Jared Blando’s second book, Fantasy Mapmaker, back in November 2019, in the late Before Times.  Before I got to it, other events overtook our attention.  Thinking about maps, though, reminded me that I already had this, so I sat down to read it last week. 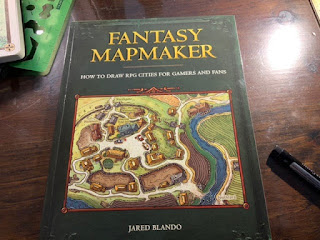 As with his previous book, How to Draw Fantasy Art and RPG Maps, I found there was enough information to allow me to follow, even though my drawing skills are fairly rudimentary.
I sat down yesterday with an A5 watercolor notebook (about 5” by 8”) with a pencil, some Faber-Castell artist pens, and a 24 color set of Prismacolor pencils to give it a try. 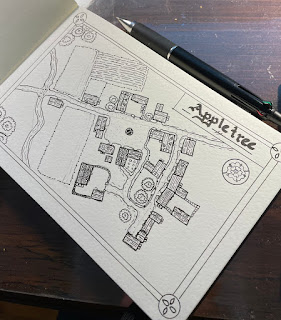 I spent about two hours creating the hamlet of Appletree, which will be placed somewhere in the territory near Stoneharrow.  The actual drawing was all pretty straighforward; just lots and lots of little more or less straight lines for most of it.  In order to get it done quickly enough to try some color, I skipped the pencil and went straight to pen after I figured out where I was going. 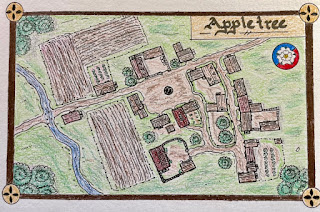 The cold press watercolor paper has quite a bit of texture, so I’m not entirely sure that I like the final effect. However, it is relatively easy to lay some color down quickly, and the intention is to create player handouts, not gallery art.  Nevertheless, for the next one I may go to watercolors and see how tough that is.  I will be through with the two week activation period after my second shot next weekend, so I intend to celebrate with some deferred shopping, which could include a trip to the art supply store.
Posted by Rob Dean at 8:31 AM 4 comments: