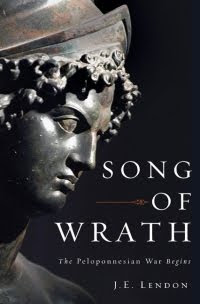 I was interested to see that wargaming activity has been going on in my absence, with a new battle report by my son on Junkyard Planet yesterday. Meanwhile, I'm still on the road, and the only hobby-related activity I'm doing is reading Song of Wrath, a new look at the opening of the Peloponnesian War. Reading on the iPad turns out to be even easier for me than handling large books, so I have a feeling that this is the way the future is going to look. The only downside that I've seen so far is that the Kindle edition I'm reading renders a two-page map somewhat inelegantly; this is a consideration, but is generally outbalanced (in my opinion) by the ease of handling compared to a large paper volume. I'm also reading (intermittently) The Landmark Arrian's Campaigns of Alexander, and, although I am a fan of the series, it has been slow because the physical book is just too heavy to carry around to read in small available time windows.

Ross was musing about the future of his projects recently on Battle Game of the Month.
I've been using time away to think about this issue myself. While it is possible that I will have more time to work on wargaming sometime in the next year or so, as my second son transitions from skating to college, it's also possible that other activities will take up the newly available time. The first conclusion, therefore, is that I am going to have to be very circumspect about adding any new start projects. I bought enough Russian Civil War figures to support a small game almost two years ago; the first base remains uncompleted. Since then, I've managed to keep myself from doing that again.

The second conclusion is that I need to spend more time on actual gaming. One of the things that I keep track of is when each of my miniatures projects was most recently on the table. It was good to get the Darkest Africa project out at Cold Wars. I was considering whether it had, perhaps, outlasted my interest, and was reassured to find that it had not. However, that doesn't alter the fact that it had been six and a half years since I'd used them in a game, which is rather too long. If I could actually manage to get in two games a month for a year, I could, at least theoretically, put most of my projects on the table at least once. I also have the usual experience of wanting to work on whatever I've played most recently, so some playing time would probably help with getting a few things completed.

The third conclusion is that I am still interested in about the same mix of periods as I have been for a while now. Therefore, I need to cultivate some patience regarding those things that haven't gotten far enough to play, and do what I can (mostly reading) to generate some energy and enthusiasm to get me working on them.

I'm not quite sure what I'm doing wrong with these mobile updates...looks like I'll have some editing to do when I get home.

Anyway, I visited a couple of hobby shops in Colorado Springs today in honor of Free RPG Day, but also picked up some aditional Egyptians to add variety to that project, and the latest Battlegames (that they had, at least) for some in flight reading tomorrow. I had enough time on my hands today that I could theoretically have done some painting, but with the ever more stringent restrictions on air travel, it's been a long time since I brought a painting kit on a trip...
Posted by Rob Dean at 9:44 PM 5 comments: 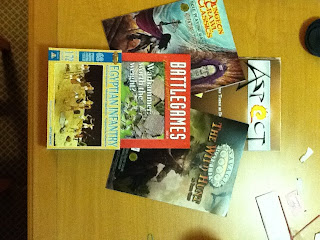 Since I am on the road, Norman has added the latest report on progress on the Adelheim fortifications to his blog:

Go have a look!

I hope to be back in action soon.

My fortress collaborator and son, Norman, has started a blog

with an interesting entry on an ancient mold (and castings) observed during a recent museum trip. Home casters, in particular, might like to check it out.

I don't know what became of the text I had with that picture. In any case, after a busy week with my second son's graduation, that is the first piece of the stonework...one of the glacis sections. 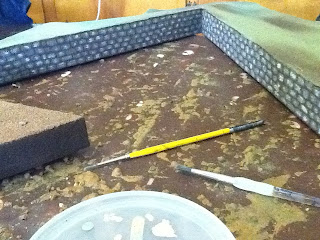 Since the weather is holding fair today, Norman and I decided that it was time to lay out the pieces we intend to use in a fit test.  The two pictures above give an idea of what the completed fortress (at least the Historicon version of it; we've got additional pieces not being used) might look like.


I'm encouraged.  Now it's time to start in on painting the stonework, and we're headed back to the home improvement store for another half-gatehouse section.
Posted by Rob Dean at 11:23 AM 5 comments: 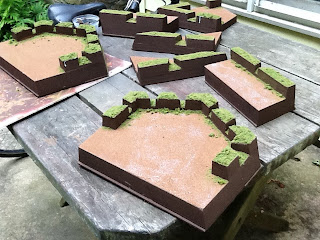 We started off this morning with some work on the walls, gluing down gravel and grass. That's drying as I type this; we'll be starting the stone painting when this work is dry.
Posted by Rob Dean at 8:43 AM 1 comment: 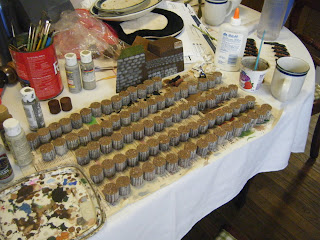 With any luck, this should be a shot of the work Norman (aka The Wicker Man) did on the gabions earlier this week.
Posted by Rob Dean at 9:55 PM 1 comment:

Time to learn something new

I got a new iPad2 last week, and was going to compose tonight's entry on it, but I find that I don't have a quick and painless way to upload a picture. So it turns out to be time to read the Blogger directions on emailing entries...pictures tomorrow in any case. Norman has been diligently at work on the trench pieces all week, and deserves to have his work displayed.
Posted by Rob Dean at 9:38 PM No comments: