I recently finished a few more figures in my fantasy update project. These are all from Reaper. The three orcs are volunteers in an experiment; they are Bones figures sprayed with my usual Krylon matte varnish to test materials compatibility. The bard to the left is just in case I can get my original D&D group together. I am painting "old" versions of each of their characters.

I finally had some time to sit and paint this morning. I still need to write last week's battle report, but at least things happening.

This was made with the Vengeance Blossom DIY kit from the Tentacles and Eyeballs Kickstarter, shown with a Reaper bard in progress. 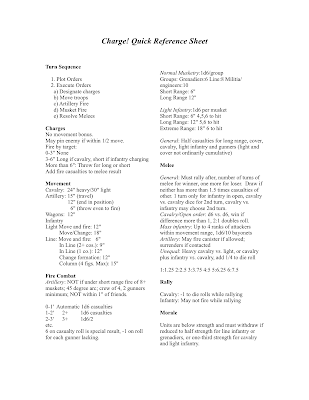 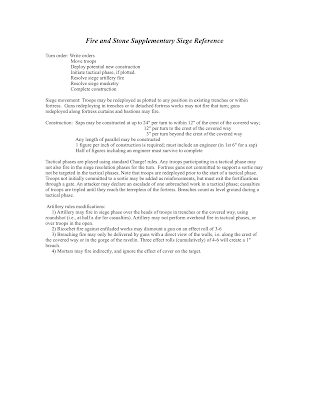 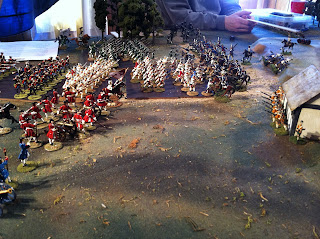 Scuffle at the Elven Tower -- A Knights and Magick Battle Report

After the completion of the household move and the recent business trip to Korea, both of my sons were home last weekend for a combination of a slightly belated birthday celebration and Easter. We took the opportunity to set up a small fantasy skirmish game using Knights and Magick. K&M was recently rereleased in pdf; the original was published by Heritage in 1980. I have a full review posted elsewhere on the blog.

The table included a river and ford, the tower, a small settlement of human serfs (who prudently fled and were not represented on the table), a small patch of woods and a couple of hills. The decadence of the elves was suggested by the fallen pillar at the tower approach...

We started by pulling out all of the individually mounted orcs in my collection, adding a warlord and a couple of ogres, and calculating a point value using K&Ms Book 3. This orcish force consisted of 27 figures in total. They were deemed to be investing the tower. An elvish force of equal point value was created, starting with a group of 6 assorted mounted figures, followed by a bow-armed hero and 6 archers as a tower garrison, and then filling in with a mix of sword elves in chain with shields (6) and unarmored spear elves (10). The elf cavalry and hero were rated at morale level A, and the balance of the elves were morale level B. A few better orcs and the ogres were morale B, with the balance of the orcs being morale C. The elvish force was tasked with clearing the table of orcs. We elected to use the small game rules, which meant that morale was checked only for individuals. This probably had the effect of reducing the penalty associated with the C class orcs, who could not be induced to flee en masse.

Norman took the orcs and William took the elves. Norman deployed a detachment of sword orcs near Lone Tree Hill, a detachment of spear orcs, an ogre, and the two wolf riders in a covered position between the woods and the human building, and the balance of his force across the ford in the hedged field.

Here the orcs await the approach of any elves...

The game opened with the appearance of the elvish horse on the edge of the table on the road at the far right in the overview picture. This placed them almost on top of the orcs guarding Lone Tree Hill. Seeing their hated enemies appear, they bellowed an orcish war cry and plunged into the mass of the riders. Caught off guard, not all of the elves were able to countercharge, and a desperate melee ensued. When the dust settled, all seven orcs were dead, but they had taken three of the elite elvish riders with them.

Meanwhile, across the ford, the elvish foot patrol, led by the spears, approached along the other road. They, too, seemed surprised to find the orcs almost on top of them. The elves' skill with the spear turned out to be insufficient to deal with the armor of the orcs, and the spear elves were rapidly cut down.

This fracas highlighted a bit of bad planning on my part, as it clumped up in one corner of the board. The bows of the tower garrison could almost reach the ford at long range, so it was too dangerous to move within line of sight of the tower. Norman's ogre found this out the hard way, by attempting to intervene in the fight against the cavalry, which necessitated leaving the shelter of the woods.

Meanwhile, back at the bloody road, the elvish swords made a valiant effort to force their way through to the ford. Although their armor and shields were a great help, and they gave better than they got, they too were cut down or forced to flee.

The surviving riders, upon looking over the field and realizing that they were heavily outnumbered by the remaining orcs, spurred up the road to the tower to join the garrison. Thus, the standoff continued, as both sides sent for further reinforcements to try to alter the situation on a later day. The orcs had not been driven off, and were held to be victorious, at least for the moment.

The whole game took about 12 turns and was played in a little under two hours. Norman was pleased to not have his troops swept from the field in a contagious rout. William was shaken to find that his troops were more fragile than he was accustomed to after years of playing Medieval Mayhem, and I was glad of an opportunity to remind myself of these rules. As expected, the game flowed fairly quickly. I did all the chart lookups since I neglected to copy the charts in advance. K&M is, as I wrote in my review, a little fussy to my streamlined current tastes, but not by any means unmanageable. I look forward to running another game, perhaps a little larger, soon.

However, the next thing on the schedule will be a return to the Not Quite Seven Years War, with a game on the 6th to allow several participants to field some new recruits.