Western League Defeat in the Spaetzelthal

Sometime during the War of the Western League, some years before the outbreak of the Not Quite Seven Years War,  a League army advanced down the Spaetzelthal.  Falling back before them Colonel Adelmann, of Schoeffen-Buschhagen, was determined to stand at the Spaetleseberg, a position which dominated the valley, hoping that reinforcements would arrive before he was overwhelmed.  He had sent word to General Schwarzadler, his immediate superior and commander of the combined Wachovia/Schoeffen-Buschhagen  Coalition force, to hasten forward with all possible speed to reinforce his position.

Anticipating a difficult fight, Colonel Adelmann ordered his troops to erect hasty breastworks to fortify their position.  A single battery of guns was sited near the center of the Spaetleseberg, and a squadron of cavalry placed in a reserve as the southern end of the ridge.  It was none too soon.  In the distance could be heard the fifes and drums of the approaching League army.  Scouts quickly reported that the defenders were outnumbered by almost four to one.

After some preliminary maneuvering, the Adelmann detachment was faced by two regiments of League troops; the Hesse-Hattemstadt regiment at the north, and the Schluesselbrett regiment to their south.  A regiment of Hesse-Hattemstadt cavalry, somewhat reduced by the previous days' marching and skirmishing, swept around the south end of the Spaetleseberg, to be met by the depleted Schoeffen-Buschhagen dragoons.  An extended cavalry battle of charge and countercharge soon developed, and the S-B dragoons had never had a finer day.  More than holding their own against the League horse, they drew back the Leaguers with terrible losses.  They were sustained in their fight by the timely arrival of the lead element of the hoped for reinforcements of General Schwarzadler, a unit of Wachovia curiassiers.  Eventually, the survivors of the beaten Hess-Hattemstadt horse retired from the field, while the Coalition cavalry rallied in open ground between two small woods.

While the cavalry battle was raging, though, the situation for the Coalition was in doubt on the slopes of the Spaetleseberg.  The Schluesselbrett infantry deployed into line and engaged in a deadly short range firefight with a wing of the Adelmann regiment holding the south end of the hill, and, further north, the other wing of the Adelmann regiment was assailed by the Hess-Hattemstadt regiment, aided by a detachment of Saxe-Kirchdorf jaegers.

Help was near to hand, though.  A column of troops, led by the remaining detachment of the Adelmann regiment, hastened toward the fight.

However, the Wachovians had arrived, and a sharp fighter between the advancing Wachovian light infantry and the battered Schluesselbrett regiment proved to be too much for the latter, and they too retired to reorganize. 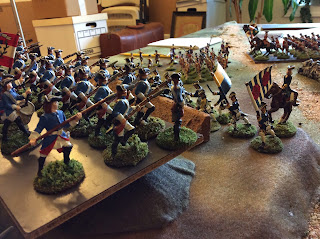 At the north end of the Spaetleseberg, the Hesse-Hattemstadt forces drove off the S-Bs and occupied their position, but the arrival of fresh Wachovians proved too much for them and they were shortly forced to retire. 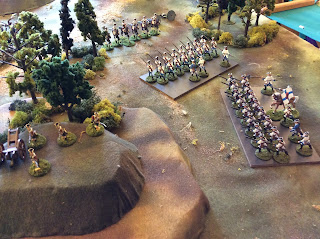 It was now late in the evening, and the League commander considered his position.  His Saxe-Weilenz troops were still fresh, but slightly outnumbered by the Wachovians.  There seemed little chance of clearing the critical positions on the Spaetleseberg before dark, and, with the possibility of further enemy reinforcements to be considered, he ordered a withdrawal.

Norman and I were probably at the game for a little over two hours, and it ran to seven turns.  The scenario was "Reinforcements in the Defense: On The Table", number 15 from C.S. Grant's Scenarios for Wargames (the "Green Book").  The rules were Lawford and Young's Charge!, and the scenario translation was on the basis of 1 book unit to 1 company or squadron of infantry and cavalry, and 2 book units of artillery to one gun on the table.

We have used the scenario on multiple occasion previously, and, given the rules, we added the breastworks to the defenders, to give them a chance against the attackers.  With no random morale rules, it's difficult for a Charge unit to hold against odds for very long.  Given the basing of our troops, and the fact the the book specifies that this scenario is to be fought across the narrow end of a rectangular table, it got a little crowded.  We had intended to fight it without the unsightly movement trays, but Norman ended up faced with a time constraint, so we tray-ed the troops for convenience.

The War of the Western League is what we get when playing at home; it's our excuse for running a game using only the troops of countries stored here, and involves Schluesselbrett, Hesse-Hattemstadt, and Saxe-Weilenz against the coalition of Schoeffen-Buschhagen and Wachovia.  We used William's Free City of Wiegenburg troops as stand-ins for the still-to-be-painted Saxe-Weilenzers today.

It's been over a year since these troops were on the table, so we were glad of an opportunity to deploy them.  I do need to decide on some rules that would allow use of smaller units to make more efficient use of our limited 5 foot by 6 foot table. 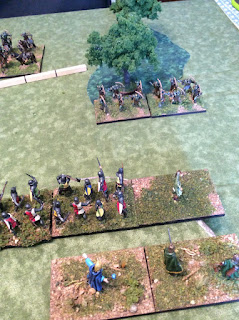 We swapped armies out for a third game, and ended up with orcs against the elves (and allies). Prompted by the game I played with Ross at Huzzah, I decided I could be more daring with my approach to the terrain, and tried to attack his archers in the woods with my heroes. Things did not work out...eventually, I was vindicated in my notion that a hero-general in the woods with a total of +4 was still a powerful unit as I started to roll up his orcish warband. It was too late by then, though, as his general succeeded in his first attack on my stronghold for an immediate victory.
Posted by Rob Dean at 11:06 AM 2 comments:

A Bad Day for the Emperor 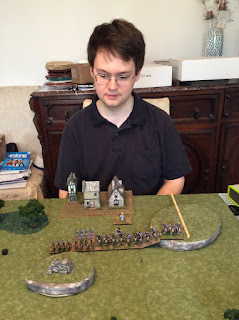 Despite a careful rereading of the manuals, the Mizarenes were unable to prevent the Cold Islanders from sacking a second town. After a confused melee, the decisive blow was struck by heroic leader of the Cold Islanders, who took on the Mizarene wizard in hand-to-spell combat. Undoubtedly he had been angered by being forced to endure several magical attacks without the ability to respond...
Posted by Rob Dean at 9:37 AM No comments: 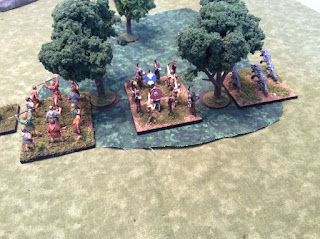 Norman was delayed somewhat by traffic yesterday, so the 40mm battle remains to be fought later today. While waiting for breakfast time to arrive, we set up a quick game of 1/72 Hordes of the Things, pitting my incomplete Cold Islands barbarian army against Norman's Mizarene field force. (Basically Vikings versus Byzantines...) Unfortunately for the Emperor's finest, their training and military manuals were no match for the ferocity of the Northmen in the first skirmish, as the Mizarene riders vanished under a hail of arrows, and their knights disappeared in a blinding flash of magic produced by the Blue Sorceress. Not long after, their general was surprised by the appearance of an angry warband on his flank, and he fell in the confused melee which followed...
Posted by Rob Dean at 8:57 AM No comments:

Help is on the Way! 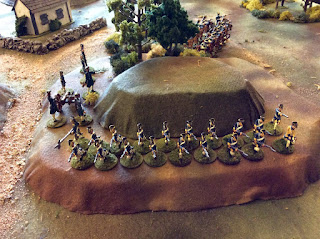 My son, the Prince-Palatine of Wachovia, is on his way up for a visit with some gaming. Since the NQSYW troops haven't been out in a while, that will be the first thing on the agenda. We're actually dropping back in time to the War of the Western League, which occurred prior to the NQSYW, to the the defense of the Spaetleseberg. A detachment of the Schoeffen-Buschhagen Adelmann Regiment is holding the hill against a combined league force, hoping to hold out long enough for reinforcements to arrive.
Posted by Rob Dean at 11:22 AM 2 comments:

I've mentioned previously that I ended up with a cache of mostly Hinchliffe mostly Byzantines from the flea market at Huzzah in 2015.  Last year sometime, I cleaned and primed a dozen Varangians with axes, intending to add them to my fantasy Byzantine project.

I recently finished them.

Inspired by this success, I went to the box and pulled out eighteen peasants, a handful of crossbowmen, and ten Pecheneg horse archers.  I figured that, as long as I had the metal cleaning gear out, I might as well add a half dozen Ral Partha/Iron Wind Metals Mongol horse archers to the mix.  That was Monday, the 29th of May.

Old Hinchliffes have a rough-and-ready sculpting style, which responds reasonable well to mass painting.  I'm not too fond of the crossbowman casting, but I painted them anyway, but the peasants came out reasonable well for as little time as I put into them.

With eighteen peasants (including one stray Byzantine staff slinger), I decided that I would base two groups of six, and the rest as individuals.  Most of the fantasy rules I'm using now are based around twelve figure units.

Unfortunately for my budget, just as I was cleaning and priming the figures, somebody on the Old School Miniatures discussion on FaceBook posted a picture asking for identification of a Hinchliffe Robin Hood peasant woman.

I ended up deciding to thicken up the individually based peasants with a bunch of Robin Hood figures, since the castings are available from Hinds Figures. Mr. Hinds was very prompt with my order, so I now have a couple of dozen Robin Hood and Sheriff figures in hand, which will probably form a pair of matched war bands for Dragon Rampant, as well as serve as bandits for D&D.

I have a dozen of those, including the principal characters, primed as of this morning, and hope to get started on them shortly.

As a bit of a digression, I had some time to paint at lunch this week, and finished a unit of Ral Partha/Iron Wind Metals orcs, from the recent Chaos Wars Kickstarter.  They'd been sitting in my cupboard for a good while, so I was glad to clear them out.  I've also primed another dozen goblins to follow up.