Historicon last weekend left me inspired to do some work, but tired and a week behind on life's necessary chores. Today I finished a few figures for the portable fantasy game (PFG). These were a Dark Alliance light warg rider, and five Caesar goblins. My immediate goal is to add some additional tactical options to the box before I head off to Gencon in a few weeks.

As I posted a few weeks ago, William and I had a trial game. I was having photo upload difficulties, so I only posted a single picture at the time. Here is the table as we set it up, using most (but not all) of the scenery in the box. For reference, the cloth is about 36" square.

When everything is packed away into the 12 liter box, it looks like this. The top layer is the ground cloth, the rules, and a hill.

The next layer down includes two more hills and the roll of roads.

The buildings, trees, figures boxes, walls, lichen and miscellaneous scenics are in the bottom layer. One figure box includes tall figures; the other is short but has more space.

With today's figures, I've got 32 foot figures on half-inch bases in the short box, plus a couple of Reaper Bones spider swarms.

The deep box includes the two cavalry figures, the dragon, the troll, and a few overly dramatic tall foot figures.

With a couple of weeks to go, I'm feeling pretty good about this project...

The convention report is a time-honored HAWKs tradition, so here is my 2014 Historicon report. I'm pleased to report, by the way, that the blog entry software I use has recently been updated to correct a problem it had been having with uploading pictures, so I hope to be back to posting on a more regular basis.

This is the third year Historicon has been in Fredericksburg, and the convention center is apparently trying to work with us on improving some things. The most important innovation this year was temporary carpeting in the main gaming area. This reduced the noise level to something that wasn't immediately giving me a headache, so that's an improvement. On the other hand, they reduced the number of water stations and didn't seem to be keeping them filled, which was a slip from last year. Bathrooms continue to be a problem...

Getting to Fredericksburg is an adventure, and I don't mean that as a positivie comment. The convention center is just off I-95, which is the only practical divided highway route from the north. Construction between DC and Fredericksburg continues for the 3rd year, and the last 30 miles took me an hour an a half, from noon to 1:30 on a Thursday. If you can't get through during work hours on a week day, when can you?

Arriving as I did around 1:30, I planned to do my shopping first, check out the flea market, and then see if there was something interesting to play in the evening. My shopping list was pretty short, some bases, some boxes of 1/72 scale plastic figures, and an advance copy of Osprey's new medieval rules, Lion Rampant by Dan Mersey. I had hoped that these would be at the con; the Amazon release date is in late September. I'll have a read-through review later, and hope to try them out within a few weeks.

I had hoped to get into a game on Thursday night, but it turned out that the two games in the HAWKs room I wished to play both filled with non-HAWKs, so no fill-ins were necessary. Norman had arrived by then, so we took a walk around and then went and checked into our hotel.

While there were a lot of interesting looking games, my eye was caught by this particular SF game on our evening walkaround, since I hadn't seen a table with a monorail previously.

With an afternoon game on Friday, I was constrained to play something early and short in the morning.

I ended up in an Aerodrome game. Despite my kids having played regularly, and despite it having been a convention staple for years, I'd never played. I picked up the mechanics quickly. It's based on the old Ace of Aces book game, with which I have been familiar since it was new back when I was in college (and saber toothed tigers stalked us on the way to class...). Norman joined me for this game. Since we were assigned planes on opposite sides, he also shot me down once. I was shot down twice in rapid succession, so it seems that my predictive skills are going to require some work before my next try at this.

We picked up a cache of Zvezda Hundred Years War 1/72 figures in the morning flea market.

The first of the three games I ran was on Friday afternoon. I signed up to do three different Hundred Years War skirmish games using 54mm plastic figures and our Medieval Mayhem home rules.

This first game had only 4 of 6 possible players, and two of those were HAWKs fill-ins, so I was concerned. The scenario involved an English raiding party attempting to collect livestock from a village to provision a castle about to be attacked.

The raiders collected some of the necessary livestock, but were eventually fought off by the French, who were arriving on the field throughout the scenario.

Norman and I had both signed up for an evening game with a hypothetical Zulu War scenario. The rules to be used were Black Powder, which neither of us had tried. I think he was considering them as a possibility for a 19th century imagi-nations project he's doing.

He ended up commanding the main body of the British, and in the photo above had taken a defensive position.

Unfortunately, my troops, extending his line, crumpled under a fierce Zulu assault and we were rolled up. Sometimes you win, sometimes Zulus...

There wasn't enough time on Saturday to play anything before I needed to set up my second game.

This involved a follow-on to the first scenario, in which a group of raiders had to cross the board (or at least most of it) with a convoy of cattle and sheep. Again, the French were converging on the board, so that the longer the English took, the more opposition they faced.

Here a reluctant Britains cow slows down the proceedings...

This turned out to be a tense and well-balanced scenario, insofar as any skirmish game (with an inherently wide range of possible outcomes) can be balanced. The English wiped out one of the three French retinues, which game them an opening to get their farm animals off the board for a solid victory.

I had all six positions filled for this one, though it still included two HAWKs to fill in.

Since the game only ran a little over two hours, there was time to check the flea market one more time before resetting for the evneing game. I found someone getting rid of a large stockpile of Caesar 1/72 Bronze Age sets of various sorts, so I swept them up on speculation (and as requested by Norman).

Norman was running two Bronze Age games, and is seen here with the first one:

My third game had six of six players. The scenario involved a raiding party from the castle attempting to burn a siege tower and a stock of timbers and parts for a second siege engine.

The English raiders eventually managed to burn the tower, but didn't burn the extra supplies. With excessive losses on their part, this was declared a marginal French victory. I was happy to see these figures on the table; my records show they were last out for Cold Wars two years ago.

We stayed around on Sunday for one final game (and lunch with some other HAWKs) before heading home. I got into a WWII skirmish game with card-driven mechanics. It's under development by my friend Buck Surdu.

Unfortunately, my luck with cards appears to be no better than my luck with dice, and my German sentries (shown above) were shot down before their first activation. I had better luck with a pair of officers inside the building, but it was still a pretty firm British victory.

The drive home was slow, due to traffic, so I may reconsider Sunday gaming next year. Overall, though, it was still a good convention. One other bit of gaming news came out of it: The HAWKs are now planning a road trip to Huzzah in Maine next May, so I've volunteered to coordinate our events with the convention. 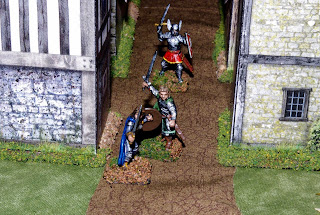 In the scene here, three Caesar 1/72 scale plastic adventurers on 1/2-inch square bases advance down the street of a small hamlet, depicted by a collection of Dave Graffam card models. The road is cut from a piece of print quilting fabric, and the ground cloth is the 3x3 seen in previous games, seamed up double-sided with the green on one side and a desert yellow brown on the other.
Posted by Rob Dean at 10:03 AM 1 comment: