Go with the flow

...or, This Week at the Painting Table

I posted a teaser shot of the creature from the Tentacles and Eyeballs earlier this week. I've had the time to complete a few other things.

Facing down the alien eyeworm is a Reaper Chronoscope figure. He's one of the random figures I've picked up from my FLGS (Days of Knights in Newark, Delaware) while waiting for the great Reaper Bones package to arrive. He looked like he'd be quick to paint, and was. I pushed through in a continuous operation. It's not a great paint job, but I want to force myself to use at least a few bright colors. My mental pallette is strongly influenced by painting Dark Ages figures, and I have to remind myself that high tech dyes exist from the late 19th century on ...

Speaking of the Dark Ages, one of the happy side effects of moving is that I have opened and looked through every box I have squirreled away. I'm still hoping to discuss the Dark Ages in a dedicated post, but, meanwhile, I ran across this old Foundry Norman casualty, already glued to the base and just awaiting scenic treatment. I think that I had hoped to find a kneeling crossbowman to place, using the dead knight for cover, but I haven't, so I just added some brush. He's a rather inconvenient figure, given my preference for mounting things on round bases...he required a pretty large washer to avoid overhang, and that left a lot of ground to do.

With him out of the way, it looks like I have a total of 82 remaining figures, a mix of new Eureka, old Foundry, new Foundry, Gripping Beast and Old Glory. Viking-based games are a great opportunity to collect lots of different poses...

I also found a small batch of Prince August fantasy figures I'd cast, probably two summers back. Some years ago I picked up the majority of the older Prince August fantasy molds in a clearance sale, with the notion that I'd need them if I ever wanted to expand my original fantasy armies, which are all in small 25mm. For the past couple of summers, I have been working with them, trying to get everything properly vented and casting reliably.

Here is a female magician from mold #657. I also did this as a drill, working on color blending and speed. I had some problems with the Reaper skin tone paint, which probably needed a touch of thinning. In any case, here is a close up of the front and back, which is (happily) closer than you would see her on the table.

I've been painting enough highly detailed figures that doing an older, simpler figure required a little mental adjustment. I am thinking about using the Prince August molds for some armies for Dux Bellorum. If I do that I'll want to stick to a simple paint style in the interest of getting the figures on the table within a reasonable amount of time.

So, four figures, four projects...at least it's progress of a sort, and I hope that someday it will add up to something. I think, though, that it's better to just go with the flow than to try to force myself to paint something that isn't interesting right now.

We hope to finish the move this weekend; I am hoping to get back to actually playing some games soon.

Keeping an Eye on Things 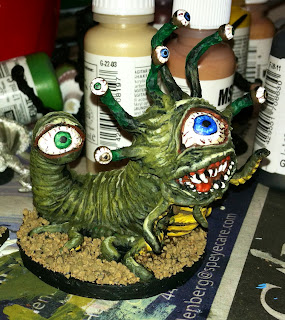 Here's an interim report this morning. I finished off another Tentacles and Eyeballs thing last night...
Posted by Rob Dean at 7:27 AM 5 comments:

As I mentioned last time, the move is absorbing most of my time, and an especially busy period at work is taking most of the rest of my energy. Therefore, despite the fact that I played this game back on the 3rd, the pictures have been languishing in a draft post since then.

Norman ran a playtest game for the rules he intends to use for his Cold Wars games in just a few weeks. We used a tried-and-true scenario, The Wagon Train, from C.S. Grant's Scenarios for Wargames, and armies built from the Caesar 1/72 scale Egyptians and Hittites. The scenario calls for a random entry of the attacker's troops. I was attacking, as the Egyptians, and it worked out that most of the game was spent in a chase after the supply train. A unit or two appearing ahead of them could have been of considerable assistance. We inflicted heavy casualties on the Hittite escorts, but never got near the supplies.

Norman's rules are designed around the idea that cohesion is the only statistic tracked, and all manner of things, excess movement, attacks, and combat results particularly, all reduce cohesion. Units can rally to regain cohesion. This worked fairly well, although it would probably work best in scenarios with time limits, to avoid being all about rallies.

We had the game on the dining room table, about 3' by 6'. The wargame tables have not yet made the move.

Norman's baggage train is a favorite. When he is working in 1/72 plastic, he usually works with the artistic limitation of restricting himself to plastic figures. The cows (painted in accordance with Egyptian tomb painting depictions of cattle) are from the Atlantic Stampede set. The pack donkeys started as Airfix Tarzan zebras, and the oxen with the scratchbuilt wagon were a flea market find in hard plastic of unknown origin. Drivers are from the Caesar Hebrew set.

In keeping with the theme, the first miniature I painted was the medium tentacle...

They are shown here with a Reaper Bones fighter for a idea of the size.

I had a little time to do some painting yesterday, but will save the pictures until something is actually completed. While my plan for the year was to crunch on NQSYW figures and start on the Reaper package when it arrives, moving has caused me to look in all the boxes of incomplete projects I have. I collected all of the remaining Dark Ages figures for a look and inventory, but I'll save that for another post...