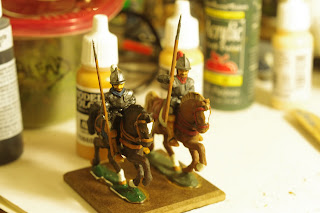 I finally had time today, after clearing the wargames table, to sit down at the painting bench and work on one of the projects that's been nagging me for a while.  The figure on the right of the photograph on this stand was done in the aftermath of the Haddington project in 2005, but has been needing a companion to form a base.  I started the metal work on one last year, but finally finished it up yesterday.  Today he's been painted, and tomorrow, if the weather cooperates, the base can be flocked and the whole ensemble given its final spray varnish coat.  The figures are modest conversions of a Nuernberger Meisterzinn tournament knight, using a head swapped in from the multiple part musketeer mold (no longer in the current catalog.)
Posted by Rob Dean at 7:35 PM No comments: 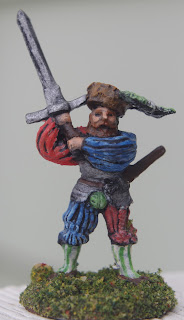 One of my personal problems with the hobby of miniature wargaming is that I've hardly ever met a toy soldier I didn't like.  Nevertheless, long years of discipline have left me able to walk through the dealers' area at major conventions without new projects--most of the time.  However, I've always had a soft spot for 1/72 scale plastics, as a result of having been raised on Airfix in the early 1970s.  As a result, I have a tendency to buy 'sample' boxes of new releases.

When Orion released the first box of Landsknechts (doppelsoldners and arquebusiers) some years ago, I was already working on the 40mm Renaissance project shown here previously.  My 40s were already mounted on group bases for larger scale battles, so I thought that it might be fun to paint up a few individuals for a skirmish game. 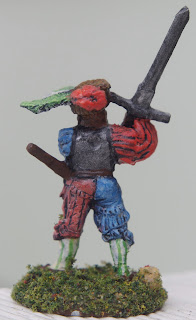 I got as far as assembling the figures and priming them, but then foundered on the realization that my speed at scenery building meant that I would never get this game on the table.  I only ever finished this one figure, just to show that I could.
Posted by Rob Dean at 1:34 PM 3 comments:

Thoughts after an evacuation

I was pleased this week to finally recover all my scattered possessions after our latest evacuation drill. This was our third flood preparation this year, and I must admit that the effort of carrying the boxes of lead up and down the stairs yet again left me wondering about whether it would be possible to trim my collection without significant loss of wargaming potential.

I have been keeping track of games played for some years now, which makes it possible to note that I have several projects which haven't been on the table in more than five years. I also have considerable stock of materials for projects which must be considered 'false starts' and which are unlikely to ever reach gaming level, as well as overrun for projects which don't really seem to need any additional work. For those latter items, I think the rational plan is to take one final stab at finishing them, and then sell anything remaining uncompleted.

Perhaps that will free up some mental energy as well as space in the war room... 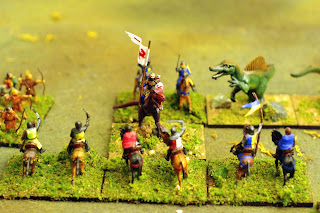 It was a busy weekend. We got some casting done, and also tried a game of Hordes of the Things with the 1/72 scale armies. Here, the Hero general of the Dinotopian army has been surrounded by the Riders of (hmmm...need a name), whose general is at the right. After a fierce melee in which both generals were hemmed in, his by outflanking riders, mine by pterosaurs, both generals were killed...but I was ahead on points. In an unusual occurrence in a Hordes game, he actually killed my general a turn or two before I managed to get his, but I rolled well and was still able to move some key units.

Unfortunately, however, the succession of tropical storms has left our river well on it's way to its second highest (they estimate) flood on record. We were rousted out of bed this morning by sirens and speaker trucks announcing an emergency evacuation, so it's somewhat uncertain as to when we might be home and what condition we might find it in. We had hoped for several additional hours of orderly preparation, so Norman and I had started by setting aside the Hittites and Egyptians as being light and suitable for a small table game. When the evacuation order came by surprise, they still ended up going with us, and we also grabbed 6mm Hordes, so it could be that's what we restart with. I hope that most of the armies, though, will be safe on the second floor. It could be another long weekend...perhaps it really is time for a more portable approach to this hobby.

My son mentioned his dinosaur themed Hordes of the Things army recently, so, as I mentioned a couple of posts back, I decided it was time to recycle a project we called The Peasants are Revolting.  PaR was built ten years ago for the early years of the HAWKs Kids' Table at Historicon.  It was intended to be a simple game using inexpensive plastic miniatures and card buildings available from Usborne, as a bit of a demo of what one could do with some time and imagination and not much money.  We recycled that idea a few years later as the Battles for Beginners Contest, but that's a story for another day...

In any case, PAR was built, for nostalgic reasons, from a few boxes each of recent production runs of Airfix Sheriff of Nottingham and Robin Hood figures.  When I was a 10-year-old getting started in this hobby, that was pretty much all there was for inexpensive medievals figures, and I had what I then considered to be quite a few of them.  So, using them again as an adult was a deliberate nostalgia choice, made despite the fact that significant numbers of probably better sets were available in 2001 (let alone what you can get today...)  After running the game for a couple of years, they have been shelved since 2003, so I didn't think I'd be missing out on anything by repurposing them.  I originally mounted them as individuals on pennies or larger washers for the horsemen, and I had a few problems getting some of the foot back off.  Nevertheless, I was able to assemble the group shown below, of six mounted stands (either riders or knights--I enjoy Hordes flexibility...), a stand of blades, a cleric, four shooters, and five hordes (or warbands, if one is inclined to be generous about their fighting ability.)
I set this aside for a week for the hurricane, but got the basing finished off this morning.  I hope to try them against Norman's Dinotopians this weekend, and I'll post some pictures if we do that.