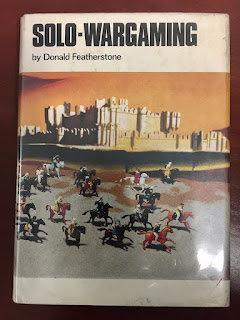 Time for both reading and painting has been scarce the past two weeks, but I am still going through my reading list for the solo campaign. Today, another chapter or two in Featherstone...
Posted by Rob Dean at 11:54 AM No comments: 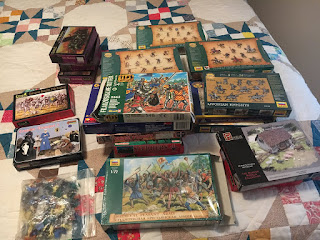 Like many wargamers of a certain age, my first battles were fought with Airfix plastic soldiers. New sets were few and far between in the early 1970s, and I was amazed with the wealth of possibilities when I dropped back into the historical gaming world around 1986. Well, I hadn't seen anything yet...

Anyway, probably as a result of early imprinting, I've always been excited by the possibilities inherent in a new box of plastic. Even when frugality and space considerations had me tracking my lead purchases closely, I always gave a pass to plastic, a reality which continues through today. So, when I decided to work on this campaign idea, I had no need to go any farther than the basement in order to round up a heap of potential resources for the new armies.

Son Norman helpfully pointed out that he had been concerned that I was biting off more than I could chew, given that I already had about 1 1/2 of the 5 armies I had placed on the map. He's probably right, but at least any elements finished will fit directly into his larger 1/72 fantasy/Hordes of the Things campaign map, so they'll see some use, and I needed the mapping pactice anyway.

I think that I will actually make more progress if I clean things up and prime them just a couple of units at a time, rather than by the whole army. The latter strategy is what I did with the Cold Islanders (various Vikings and Saxons), and might possibly bear some of the blame for the fact that the primed strips of troops I've been painting lately have been in a box for four or five years.
Posted by Rob Dean at 4:33 PM 6 comments: 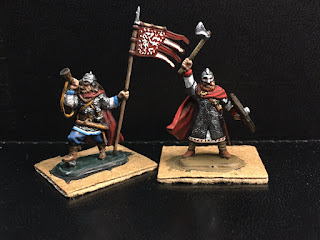 With the campaign map in hand, I was back to painting more figures. These Zvezda Viking leaders (1 each per box) will be based as a Hordes of the Things hero stand for the Cold Islanders...
Posted by Rob Dean at 1:58 PM 4 comments: 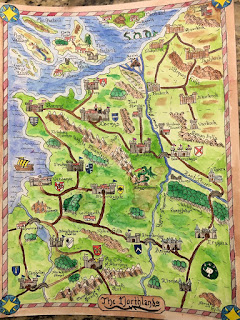 This one will just be a short update...using the techniques in Jared Blando's book on fantasy maps, I have drawn up and tinted an area movement campaign map for the proposed solo campaign. I threw in zones for a Necromancer contingent, some lizard men, and the dragons, all of which I could paint, though not in army strength.
Posted by Rob Dean at 10:01 AM 2 comments:

I have been continuing to work on my Hordes of the Things fantasy campaign armies this week. These three Revell Anglo-Saxons (from set 02551) are almost ready to join the Cold Islander barbarian forces.

I am expecting that these figures won't be based on their final configuration until I get more of the overall class (in this case, "warbands") done. That will allow me to ensure that I don't end up at the end with a stand of 6 figures all in the same pose. I revived this army sub-project after cleaning and priming the figures four or five years ago, so I don't entirely remember what I had in mind, but it was about six stands of six figures each for the warbands, and I'm currently up to about 8 of those 36 figures.


Part 2 on the solo fantasy campaign is still shaping up, but I did finally finish a few figures yesterday, so I though I would share them.

First up is a team of 18 Minifigs ME (Mythical Earth) elves from ~1974.  I got my start in fantasy miniatures wargaming with Minifigs, and I've been working the past two years to reassemble a representative force to supplement the handful I still have from back in the day.  As I was finishing these figures up, I ended up with another lot of 18 from eBay, so I hope eventually to have two units of twelve, a unit of six, and the three-figure command stand to represent the elves.


When I revived the old fantasy project, I looked at other Minifigs ranges on the Lost Minis Wiki.  I don't really remember seeing the Valley of the Four Winds figures in stores at the time, but today they interest me.  Among the other oddities in the range is this "giant armored woodlouse" (aka pill bug, or sow bug), so I was pleased when I was able to obtain one last year.  I'm not sure how it's going to feature in a scenario yet, but it's ready when I figure it out.

Another eBay lot last year brought a pack of wargs, a mix of these Custom Cast/Heritage figures (catalog number 1011) and some old Ral Partha Wizards, Warriors, and Warlocks ones.  These were finally painted last month, when Norman came up for a game and paint session on the 11th.  Painting them turned out to be easier to get done than the basing. (not that the basing was especially difficult; just questionable time management on my part.)


The last thing finished off yesterday is this Iron Wind Metals "Elven Colossus", originally cast by Ral Partha as part of a small range of 54mm display figures.  IWM rereleased it as part of the 2015 Chaos Wars revival Kickstarter.  I did this one as fairly well polished bronze; there are just a few traces of verdigris in the deeper crevices.  The HAWKs members have been playing around a lot with verdigris effects in the production of scenery for Frostgrave.  If I were to do another, I might be "greener"with it.