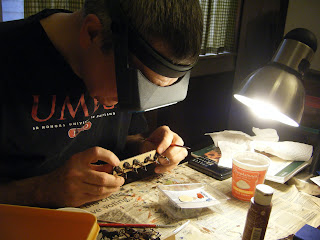 I finally had the opportunity to try out my new Optivisor lst night, finishing up a few Bronze Age Libyans. It looks to be a big help...if I can pry it away from Norman, who has been doing some bravura work, which I expect he'll be showcasing soon.
Posted by Rob Dean at 9:38 PM 2 comments: 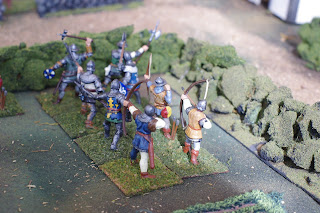 My sons and I had the opportunity to drop in on the HMGS East Cold Wars convention in Lancaster, Pennsylvania, for two days this year. Back in the planning phase, we were not sure what would be going on that weekend, so I decided that I would only sign up to run games on Saturday, figuring that I could make that work no matter what else happened.
As it was, though, getting up on Friday didn't turn out to be a problem. We arrived around lunchtime, and started by doing a trawl through the flea market area and the dealers. My shopping list this time around was very short, and, for better or worse, there wasn't much temptation for me to spend unanticipated money. A combination of having been sick that week and having been unable to put much time into miniatures lately left me feeling a little jaded as the convention started, but I am pleased to say that my motivation had returned by the time we wrapped up on Saturday night.
After finishing my shopping run for the day, the kids and I had a little difficulty in deciding on a game to play. Much had already been closed out, and the Napoleonic theme seemed to combine with the usual run of WWII and science fiction games to reduce the number of games available that I was interested in playing. We finally found three spaces available in a pirate skirmish game. I'll post an additional picture gallery in a few days, when I have access to my main computer again.
We drove back in the morning after an early start, so that we'd be in position to set up our Medieval Mayhem skirmish for a 9:00 start. Unfortunately, between an uninspired game description, the general early-ness of 9:00, and the opening of the dealer's hall at the same time, I had no takers for the game. Making the best of a bad lot, I had a look through the flea market again, turning up a few small resin flat roofed adobe buildings suitable for colonial games (or even for ancient Egypt, in a pinch) from the out of production TCS line, and some miscellaneous plastic figures. Norman was signed up for a Matt Kirkhart Battle of Zama game at 1:00, so he wasn't available to help me at that hour. I eventually had four players show up, which was sufficient to run with. As I mentioned in the playtest report, the game went well enough, though the English needed to be more aggressive to win. The one picture I have attached here shows a group of Englishmen stuck while attempting to cross a hedge; note the archers, who are not in firing positions.
Once the game was cleaned up, William and I had a chance to sign up for the second running of Zama in the evening. He and I (and a player we didn't know) teamed up as the Romans. Matt uses a set of rules modified from Morschauser's How to Play War Games in Miniature, with some added command and control rules and special troop abilities. This looked like a tough scenario for the Carthaginians, whose elephants (as it happened) did not make up for their overall cavalry disadvantage, and Roman discipline (and a few uncharacteristically lucky rolls by me) allowed us to carve right through the center of the Carthaginian line. On the Roman right flank, William commanded the Numidian allies, mostly cavalry, who swept away the opposing Carthaginian-allied Numidians and hooked around to harass the Carthaginian rear. On the Roman left, the Roman and Carthaginian cavalry were locked in a lengthy combat. Although the Carthaginians won the fight, they were nearly spent, so that it had no effect on the center. I enjoyed the opportunity to run a straightforward ancients game, and it's always a delight to see Matt's homemade wooden figures. (http://junkyardplanet.blogspot.com/ for some pictures.) I ended up ordering a Kindle copy of the relatively new Robin Waterfield translation of Polybius for some inspiration...I already have Romans and Carthaginians Painted and ready to play, so any impulse to game could be readily accommodated.
With that, we packed it in for the convention, ad headed home to sleep in and let our sore feet recover for a day before returing to work.
Posted by Rob Dean at 4:32 PM No comments:

As promised, here are a few shots from the playtest game on the 25th.  I'm afraid that real life is continuing to delay production of the Cold Wars after action report.
One note on the play of this game in comparison to the convention: In the home game, the English players made very aggressive use of their bowmen, ensuring that they got to shooting positions and stayed shooting as much as possible.  At the convention, the English players did not, and were eventually overwhelmed by the arriving reinforcements.  How much tactical advice should a gamemaster hand out during a convention game?

I will post a little gallery of Medieval Mayhem shots from our playtest on the 25th sometime this week, and I am at work on my Cold Wars AAR, also with pictures. I've had a couple of overly busy weeks, though, with a proofreading job (good) on one hand and a two day bout with some sort of stomach bug (bad) on the other...I was a little worn and jaded by the time we got to Cold Wars on Friday, but I'm happy that my energy and interest levels were restored by the time we got home on Saturday night.