Down the Rabbit Hole — Part 6

After a couple of weeks of using my painting space for work-at-home, I finally cleared it off during my day off yesterday for its primary purpose.  As mentioned in the previous five installments in this series, I have been attempting to put enough new stuff during the pandemic to run a game.  The ultimate goal may be to have a force sized for Osprey’s Oathmark rules, but in the near term, I’ll settle for a skirmish.

I have finished eight humans, which should give me enough for a basic warband in A Song of Blades and Heroes. I got as far as cleaning up and priming a dozen or so trolls, goblins, orcs, and hobgoblins from the Prince August molds a few weeks ago.

With inspiration having arrived yesterday, I pulled them out and did a quick paint job on six of them, two trolls and four goblins, all from Prince August mold #656.

They are shown here with a barbarian warlord from Prince August mold #670, to give a sense of the scale.

While I usually paint my orcs olive drab, my son’s recent orc painting prompted me to try something a little different, so the orcs, goblins, and hobgoblins for this project are going to be in a yellowish khaki.  I did the two trolls in the “traditional” olive, because it’s fantasy.  I still have another half dozen of the orcs, hobgoblins, and goblin wolfriders on the desk, and will need three to six of them to be ready for a skirmish game.  Back to painting...

This has not been a particularly good month for hobbies.  I have ended up with enough time to daydream a bit, but not much more.  We have been spending some decompression time watching some relatively kind and calm television series, including Tiny House Nation, which got me thinking about a Tiny Library (not a Little Free Library although that’s a good idea in its own way), but something that would fit into a tiny house, or, more practically, be suitable for hauling along on an extended retreat (or, as my son noted, 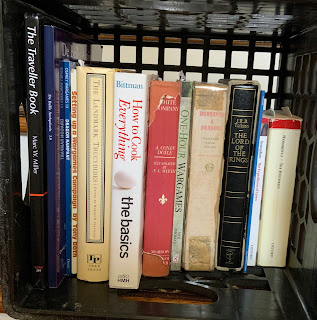 suitable for an emergency evacuation...we used to live in a flood zone).  This Tiny Library would presumably be supported for the retreat by a painting package, and a miniatures package (the Portable Fantasy Campaign).  It’s also implicit in the selection that I might have access to another gamer or two...
So here’s how it breaks down.
FICTION
1) The Lord of the Rings, J.R.R. Tolkien (India paper edition)
2) The White Company, Sir Arthur Conan Doyle (Books of Wonder edion with Wyeth illustrations)
The fiction section requires no particular explanation.  These are my two favorite most reread books.  To some extent, they also support the “wargaming retreat” theme as possible sources of scenario inspiration.
NON-FICTION
3) How to Cook Everything:The Basics, Mark Bittman
This one is a practical choice, intended to carry me through an extended period of civilized meal preparation, i.e. not camping nor in survival mode.  If I did need to camp, I have a couple of specialized camping cookbooks geared toward Coleman/Primus stoves and campfires.
4) Histories, Herodotus (tr. Robin Waterfield, Oxford World’s Classics)
5) The Peloponnesian War, Thucydides (Landmark edition)
6) The Expedition of Cyrus, Xenophon (tr. Robin Waterfield, Oxford World’s Classics)
The main history of Greek and Persian conflict before Alexander is covered by these three books, all of which are editions with good academic supports (i.e. footnotes and commentary).  I have ben looking for time to dig deeper into this period, and a retreat/sabbatical would be a perfect opportunity.
ROLE-PLAYING
7) Dungeons & Dragons, Gygax and Arneson (original edition with supplements)
8) The Traveller Book, Mark Miller
9) Fate Accelerated Edition, Valentine et al.
There are several thoughts going on with these selections.  The Traveller Book is the most complete one-volume version of this classic science fiction RPG.  I’ve been a fan since the first printing in 1977, and it’s always good to have a version of the game along on a trip because of the amount of inherent solo play there is in character creation and world building.   The Dungeons & Dragons set has been chosen for the practical reason of being the fantasy game I would wish to run next.  Preparations for such a game would be a reasonable retreat activity, but it can also be used for some random setting solo play with the aid of some early random dungeon tables.  The original rules were reprinted in 2013, so I usually carry around the reprint edition when I’m working on something.  Bringing my tattered original copy from 1976 is a sentimental move.  Fate Accelerated is here because it is generic with respect to genre, simple, and very thin.  If other people were not along on this retreat, it probably would not see use, but it also takes up very little space.
MINIATURE WARGAMES
10) Dragon Rampant, Dan Mersey
11) De Bellis Antiquitatis 3.0, Phil Barker
12) Setting Up a Wargames Campaign, Tony Bath
13) One Hour Wargames, Neil Thomas
Among the four categories, this one is probably the most subject to revision.  Part of this is due to the category needing an additional support package to be of use at all.  So, anticipating that the aforementioned Portable Fantasy Campaign would be the basis of the support package, Dragon Rampant is one of the main rule sets which ordinarily goes with that.  (Practically speaking, this doesn’t really need to be here; the actual physical box with the miniatures stuff has Dragon Rampant, Hordes of the Things, and A Song of Blades and Heroes already tucked in the box.)
DBA is on this list as the current family favorite ancients rules to support the painting project implied by the Greek history books.
One Hour Wargames is included for two reasons.  The primary reason is that its scenario collection is already scaled for small armies and for a 3’ by 3’ game surface (which is what I have for the Portable Fantasy Campaign).  The second reason is that there are simple rules for a variety of periods in case one needed a bit of a break, and was open to improvising a game using cardboard counters or some such in lieu of actual miniature troops.
There are three alternates that would be reasonable choices in this category.  My signed sentimental copy of Donald Featherstone’s Solo-Wargaming has some ideas on how to get through a period without other gamers around.  A copy of Morschauser’s How to Play War Games in Miniature could be a direct substitute for the “all periods” aspect of One Hour Wargames, and is something of a sentimental favorite even though I am not attached to any particular physical copy of the book.  If One Hour Wargames were replaced, a need for C.S. Grant’s Scenarios for Wargames would be greater.  The “Green Book” is also both rather rare (in general) and sentimental (in the form of my particular worn and much annotated copy).
Different choices in miniatures would imply different rules; choosing to paint 1/72 scale 18th century figures rather than Greeks and Persians would call for A Gentleman’s War instead of DBA; bringing along some Dark Ages figures to work on might call for Dan Mersey’s Dux Bellorum, and so forth...
IMPLIED SUPPORT
As mentioned, the choice of cookbook has to do with what sort of kitchen one might be able to access; having just an Instant Pot would imply a different cookbook, as would expecting access to be restricted to just a camp stove.
The role-playing games would necessitate a bag of dice and a stock of office supplies (notebooks of quadrille paper, notecards, colored pencils, etc.).  The would also benefit from access to the miniatures in the miniatures support package.
As mentioned the miniatures books imply access to a package of miniatures.  This should include at least a basic painting kit, some tools and basing supplies, and some miniatures awaiting painting. 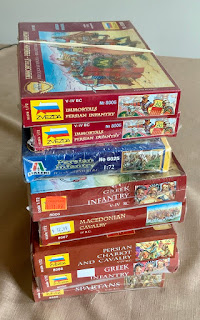 I haven’t double-checked it lately, but I had pulled out eight boxes of Zvezda plastics, which I had calculated had the troops necessary to support the four basic armies which might be needed for the project (two slightly varied Greek armies for the Peloponnesian War, two different Persian armies to do Cunaxa, and the Persian War to be done with a mix of them).  I haven’t sized them, but they should fit in a 9 or 12 litre Really Useful Box along with the basing supplies and tools.  My travel paint kit would probably suffice, although I’d want to make sure that the bottles were full before heading off on a six month retreat.
So, there you have it, a thought experiment made (somewhat) real ...
(Edited 10/29/20 to remove typing errors...)
Posted by Rob Dean at 2:19 PM 4 comments:

Down the Rabbit Hole, Part 5

This is a little behind the times, but last week I was tied up GMing a LARP for work...

I picked up some cheap brushes and craft paint the other weekend, and returned to a project on hold for a few months: the fantasy scenery upgrade expansion and Prince August casting project.  I finished several buildings back in July, but still had a few left.

Doing these ones reminded me of how irritating it is trying to neatly edge half timbered buildings.  However, they got done... 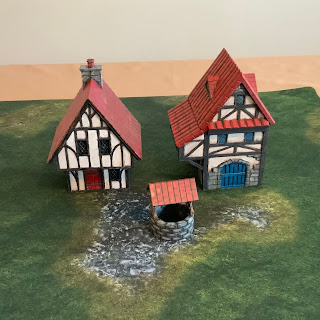 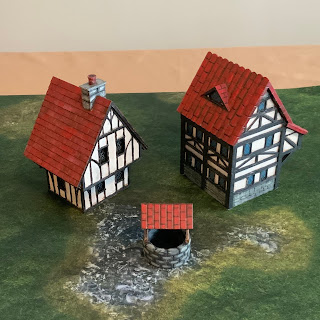 While getting ready to put them away, I pulled out the earlier ones.  That should make a reasonable village for the first outing of the Prince August figures. 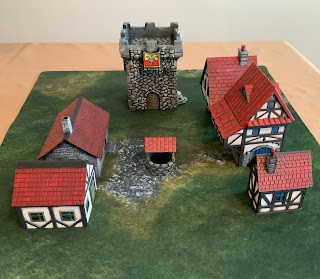 I cleaned up and primed a dozen or so Prince August orcs and goblins, so the next task is to get them painted.  Happily, I have taken next wek off from work...