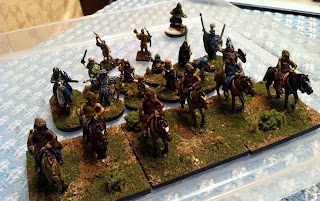 According to my painting records, the last time I finished anything was toward the end of August.  Now, for purposes of my records, "finished" is defined as putting the final spray varnish coat on figures that have been based.

A couple of years back, I started having trouble with the Krylon 1311 matte spray sealer I had been using for a long time, in that it kept fogging on me.  I can't help but think that they changed the formula somewhere along the way, and that it was now more sensitive to humidity than it had been, but, in any case, it stopped working for me.  I invested in a humidity meter, and also changed to a Krylon Low Odor matte spray varnish, which seems to be less sensitive.  Nevertheless, this weekend was the first time in two months that the relative humidity dropped below 60%, and I therefore felt confident in spraying everything that I've been dabbling with lately.

I continue to be working on vintage fantasy and related figures, for the most part, and the group shown above includes some Hinchliffe medieval Pecheneg horsemen (from the flea market at Huzzah in 2015), some old Heritage figures of a couple of different ranges, a Minifig Dark Ages warlord (though actually from their Imperial Roman range) an early Grenadier elf, a Ral Partha horseman, a couple of stray 1/72 scale plastics, and a fairly modern Reaper fantasy crossbowman, in the back (based for my Frostgrave war band).

I have been considering the question, without much of an answer so far, of whether I should write down a plan for the vintage fantasy project...that's probably a post for another time.

In the meantime, Fall In is coming soon, and I will be shifting back to historicals for a couple of games co-hosted with Ross Macfarlane.