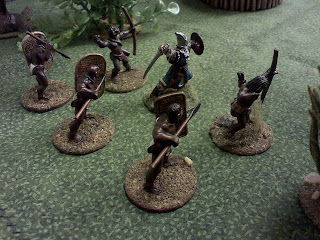 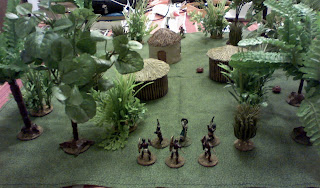 It was moderately amusing, but one figure per player can be frustrating; Norman's figure was locked in combat for most of the game. This is also the first time we've played these rules at home, so the main result was to leave William and me resolved to go back and read the rules more thoroughly.
Posted by Rob Dean at 8:56 PM No comments:

A Complete Change of Pace

I have been following Bob Cordery's adventures with How to Play War Games in Miniature by Joseph Morschauser (copyright 1962) since before Christmas. I had put together the suggested forces for the Modern period version of the rules about ten years ago, using Matchbox military vehicles, readily available at the time, and 1/72 scale plastic figures from ESCI. I wrote up a few little extensions to the rules for aircraft and cover, consistent with the basic flavor of the rules.
Seen below are some of the elements of the task force from the Republic of Green Land, who were facing off against their traditional enemies from the Democratic People's Republic of Brown Land. My older son, Norman, set up the battlefield. He also built the bridge himself, when he was a good deal younger than he is now. 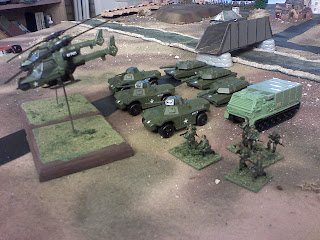 It was agreed that the scenario would be a meeting engagement between 700 point task forces, which would attempt to control a bridge. Both players entered the table on the same side of the river, at opposite ends. Below you can see the advance elements of the Brown force making their way through the town. Buildings are card models from Fiddler's Green, for the most part, and have been stored quite haphazardly for the past ten years. 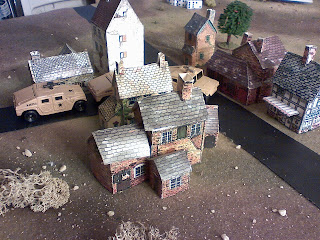 Here the Brown forces have cleared the town and are confronted by the lead Green elements, commanded by my skating son, William. The river is a no-longer-available piece from Scenic Effects. Roads were laid in quickly with gaffer's tape. There was some dismay when players were reminded that scout cars had no antitank capability, being deemd to be machine gun armed only. Bradleys visible beyond the road represented the brown armored force, and made short work of the Green armor, which was outnumbered 2:1. 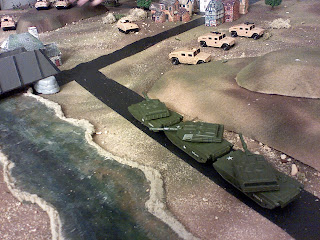 Here, toward the end of the game, most of the table can be seen. We agreed that we would play until one force suffered 50% casualties measure in stands rather than points, or until somebody had infantry on the bridge without enemy present for three turns. Each side had chosen a combined arms force of about 40 Basic Units. As I expected, given the somewhat sanguinary and rudimentary nature of the rules, the break point was reached before control of the bridge had been established by either side. 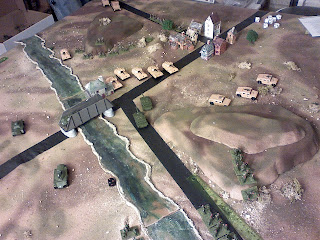 Below, Brown infantry at the end of the game advances to seize the bridge. 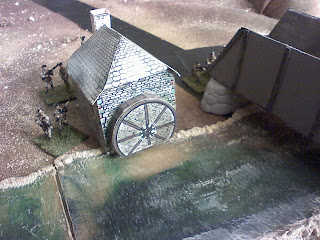 It took a little less than two hours to choose forces and play about 8 turns to a conclusion, so it was nice and snappy from that point of view. Norman's comment was that it needs a little more period flavor, and some additional terrain effects would slow the game down a bit and perhaps provide some additional need for maneuver. He also felt that combat was pretty random and needed some further differentiation between weapon and target types. There had been some speculation by Bob Cordery that the armor overrun rule would be too unbalancing; in this game things went about as I had recalled, with nobody using the rule. Infantry in groups outnumbering tanks would leave an overrunning tank to be quickly destroyed by the limited antitank capability of the rifle stands, in the opinion of both commanders. (I had the back end of the Green forces, and didn't have the opportunity to consider an overrun before our morale collapsed.) Since it's all laid out, I might consider a solo game before we clear the table, and see if we might not have done a little better.
All in all, though, it was fun to dust this one off for an idle afternoon.
Posted by Rob Dean at 9:08 PM 2 comments: 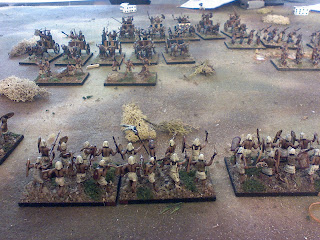 I had the opportunity to engage my son in another round of Egyptians and Hittites using Warhammer Ancient Battles on Sunday (10 January). We have been playing these rules repeatedly lately for two reasons: to encourage ourselves to paint more figures for this project, with a goal of putting on a game at Cold Wars or Historicon ’11, and to increase our familiarity with the rules to the point where we can get through a game without needing a rules lookup in the main book.
The picture shows the view from behind the center of the Egyptian line. Given that the Hittites have a substantial advantage in chariotry (50% of points versus 25% maximum for the Egyptians), I decided that I would deploy the infantry forward and attempt to soften up his chariots before committing mine. Success was somewhat limited...my foot figures shown here were routed and destroyed in pursuit by the lead Hittite squadron, thought I did manage to destroy the pursuers in turn by archery from my chariots. The game ran about eight turns in two hours, so was a pleasant way of spending the morning before I took him back to school. Next week I think we’ll continue the Warhammer familiarization project, but, unless I finish the chariots currently on the desk, we’ll break out the Saxons and Vikings or the Second Punic War figures for a change of pace.
I am still working on project goals for this year; continuing the expansion of the Bronze Age is high on the list, as is the fictional tricorne project expansion (the Not Quite Seven Years War).
Posted by Rob Dean at 8:27 PM 1 comment: 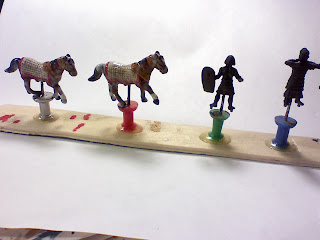 I finally had time to sit down at my painting desk for a little while this evening. While I don't really like to show things in progress, the fact that there is progress is worth a little celebration. I have two chariots to go to finish phase one of the Egyptian army. I find the horses take me longer than the other elements of the chariot, so I decided I'd do the horses first on these last two. I set the crews up for priming then slopped varnish on the horses, here seen still drying...
The team painting sticks have helped with these particular unbased figures; I haven't used special purpose painting jigs since I was doing 15mm cavalry back in the late '80's, but I will have to consider it again in the future. A revised chariot edition would include some sort of holder for the car.
Posted by Rob Dean at 9:03 PM 2 comments: 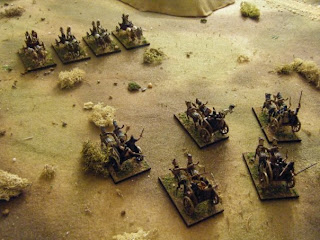 My older son, aka the Great King of the Hittites, has been home for winter break, but will be headed back to school today for a January mini-term. We decided that we had better get in at least one game to keep us encouraged on our chariot project before he left, so we pulled out the figures and cleared the table last night. We had a quick game of Hittites attempting to raze a village against a local force, with the Egyptians coming on the table relatively slowly. The picture above shows the advance guard of the Egyptian force preparing to take on the left wing Hittite chariot squadron. We were not too concerned about scenario balance (which could have used some work), since our main objective is to get to the point where the Warhammer Ancient Battles rules are automatic and don't require stopping to look things up. A few more games should see us at that point, for a while ...
I haven't had a brush out yet this year; but will put in some time clearing and organizing the painting desk today.
Posted by Rob Dean at 8:50 AM 1 comment: