I see that it has been a few weeks since I posted anything.  I actually took a week off from work back on the 9th, but my desk had reached this state... 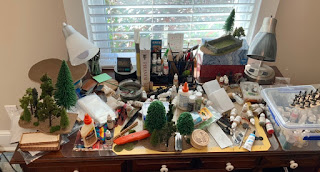 ...and it was therefore difficult to get anything done, except for one scenery piece. 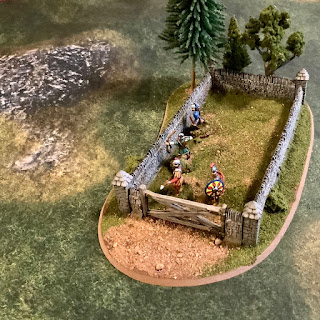 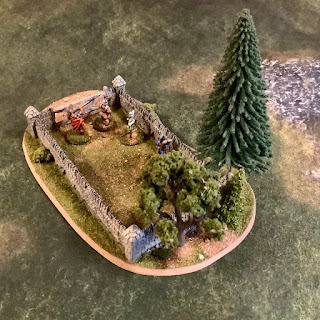 I have been gradually working on improving my scenery collection, and decided a while back that I was going to build bases of trees and the like, to save wear and tear (at the expense of storage space, of course). As I worked toward the goal of staging a game with all-new pandemic era gear, I realized that I would need some walls.  These plastic walls from the Mantic Terrain Crate Kickstarter look reasonable, but are so thin that I can’t imagine how I would keep them standing on the game table. I decided that I would just go ahead and group them into a few permanent enclosures and base them on some of the irregular masonite bases I picked up last fall from an Etsy dealer.  There was some space left at one end, so I planted a few trees to make use of it.  The pictures above show the walls with a handful of the Prince August figures I’ve been painting.  When time permits, I have two more enclosures to go, plus a single spare broken down wall to enhance some other scene.
When that week was over, I had to clear the desk off to go back to using it as my work from home space.  When the next break started, I decided that I would depart a bit from my usual home desk procedures, by putting out ONE (and only one) thing to work on.  While there are plenty of Prince August figures awaiting my attention, my son has been working on DBA Bronze Age armies.  I have been one stand short of a complete Bronze Age Libyan army for months (I/7b, if you’re into that sort of thing), so I thought that it would be a good time to finish it.  I’ve had the pieces for a light chariot general stand sorted out since spring.  Our Bronze Age project is staffed by the beautiful and inexpensive Caesar Miniatures 1/72 scale plastics.  However, as extensive as their range is, there isn’t a “Libyan” chariot.  I built this one using an Egyptian chariot body, horse from one of their Mitanni chariots, and some of the Libyans as the crew and runners.  I thought about trying to jam in a driver as well, but it was looking too cluttered, so I didn’t.
This is what I ended up with. 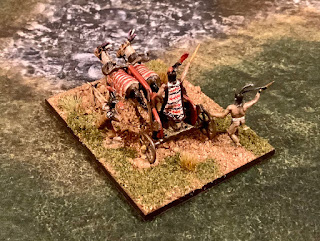 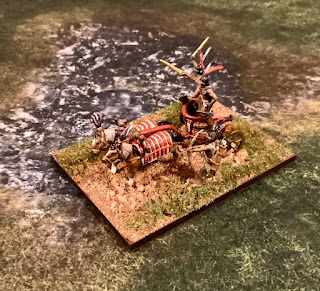 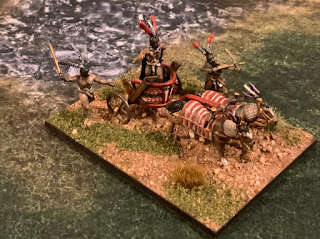 In keeping with the usual artists’ rendering of the Libyans (e.g., the New Kingdown Egyptian Osprey guide), most of my foot figures are painted with cloaks representing the hides of spotted cows with the hair left on.  I wanted to do something a little more upscale for the commander, so I went looking around for contemporary images, and came up with this:

I attempted to render the alternating lines of “arrows” and “eyes” from the second and fourth figures, and then echoed the same pattern on the chariot sides.  In the absence of evidence, that seems as good as any other possibility.
With the completion of the command chariot, I now have all twelve DBA elements needed for my army: 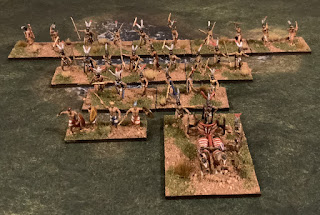 My son has been pretty consistently building all the variable elements for his DBA armies.  For the Libyans, I could have a second chariot in place of the four man Sea Peoples blade stand, and three more “psiloi” in place of the stands of warriors (“fast auxilia” in the game).  I’ll probably build the chariot at some point, but I need to play some more DBA 3.0 to decide whether there is any reason I would choose to add three more psiloi to an army that already has five.
The next project on the desk will probably be fantasy rather than Bronze Age, but I do have a DBA army of Nubians sorted out, to give me another historical Egyptian opponent.