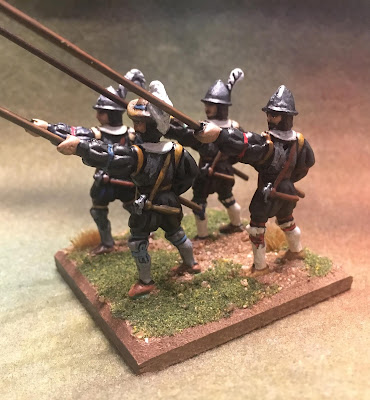 
As I was writing my Huzzah report last weekend,  one thing led to another.  Ross and I agreed at the convention that next year's game(s) was(were) going to be something using the combined resources of our 16th century home cast 40mm projects.  So, yesterday I dug out my bags of castings to see what I should start working on, and I decided that the proper thing to do was to muster the troops on the table and see what I really had. (My last inventory is both hidden somewhere and probably suspect anyway.)

So, there they are: 4 artillery pieces, 18 assorted cavalry stands, 10 stands of pikes and pike command, 5 stands of swordsmen, 4 stands of improvised converted crossbowmen, and 8 stands of musketeers.

The story that goes with these figures is this:

I have been interested in the 16th century, and the warfare of the 16th century, for longer than I can remember.  It's probably a combination of being an early music enthusiast and being exposed to Sir Charles Oman's History of the Art of War in the Sixteenth Century at an impressionable age.  In the early years of the current phase of my interest in the miniatures hobby (starting around 1987, say) I would play 16th century games at the conventions when I could, but never started my own project, being intimidate by painting all those Landsknechts.

By the time our club, the HAWKs, had started in 1994, I was already casting some of my own figures from commercial molds.  Chris Palmer, also a member of this board, and I both had fairly extensive mold collections, including two non-compatible 40mm 18th century sets.  Mine were Prince August, and his Nuernberger Meisterzinn. He also had a Meisterzinn catalog.  I don't know much about Meisterzinn, but they were already a zombie company (things kept in production but no new products) by 1994.  They had a small range  of 16th century molds, and I thought that it would be an interesting challenge to collect them, cast up some figures, and put a game together.  (If one follows that link, I might note that there are two molds no longer in production; an artillery piece, and a musketeer with a choice of three separate heads.) A set of rules called Armati had just come out, with a Renaissance section and provision for playing with a single stand as a unit, so I used that as the basis for my casting.

It took, as these things do, a couple of years to get things done to the point of playing games with them.  Not long after that, Chris decided to build some 40mm Leonardo da Vinci machines to go with them, inspired by a number of games of Leonardo Plus which were run at the cons for a few years.  Those rules didn't suit our collections, though, so we ended up staging a game using home rules at Cold Wars in 1999.

After that, the figures got put away for a while, until Ross and I ended up in discussions about how difficult it would be to convert enough of the figures to form the basis of a 16th century English army (still using the longbow).  From there, we ended up deciding to put on a game in 2004 using a scenario from the Anglo-Scots Wars of the 1540s.  The siege of Haddington in 1548 was nearly a perfect match for our hodgepodge collections, with mercenaries from all over Europe participating on one side or the other.  Once again, we had to write rules to suit our collection of miniatures.  My pictures of that game are unfortunately pre-digital, and buried somewhere.  We even got an award from the convention for that one, because it was unusual and eye-catching.

Since then, we dust them off every few years, revise the rules again to taste, and set to.  If I'm at home, I'm limited by the total size of my collection, but I can still put on a decent two player game.

I still haven't managed to get to the Siege of Malta in 1565, but Ross wants to do Turks this next year, so we'll see what happens.

So, meanwhile, I pulled out the castings for a stand of four pikemen, since pikes are relatively speaking in the shortest supply in my collection, and a three man command stand for swordsmen or other light foot.  As far as I can tell from my records, I haven't painted one of these figures since about 2011, and I don't think I've done an infantryman since we staged Haddington. I thought that I had better start small and see how this felt. 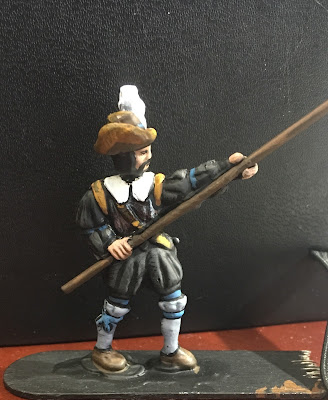 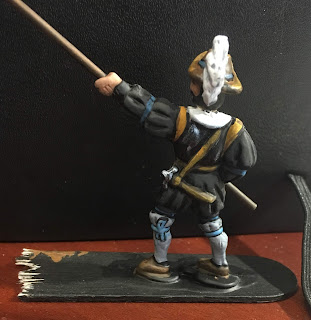 I roughed out one pikeman at lunch one day this week, and it didn't seem too difficult, so perhaps there will eventually be a second pike block (of nine or so stands).  I have also ordered some molds from Berliner Zinnfiguren for more fully round landsknechts in 40mm, and I'm very curious to see how they'll look side by side.  Irregular Miniatures has also added an Italian Wars range since I started this project so many years ago, and I may end up adding units of those as well, rather than fiddling with converting so many things from so few basic poses.