Under the current circumstances, I am finding it more difficult to get anything hobby related done than I had hoped.  However, I am stress-baking like everyone else, so at least we have nice bread.

My neighbor gave me a sourdough starter on Friday, so I am experimenting with a loaf today...it smells good, at least.


I was politely asked to clean up my hobby space a bit, and one of the things cluttering the floor was my ready supply of bases.  I took the opportunity to replenish from the reserve stocks, so my bases are now neatly organized (and restored to their designated “place”) and merely need a few soldiers: 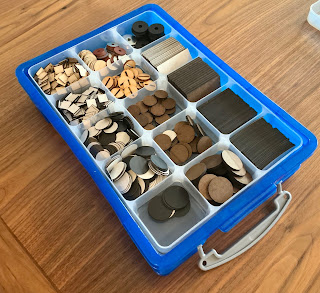 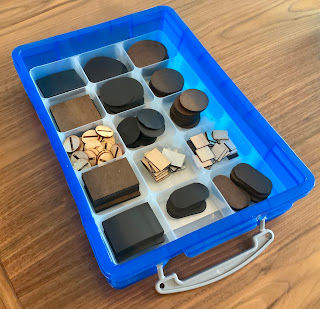 The Really Useful Box company sells the organizer trays; two will fit in a 4-liter box, and I have 60x60, 60x40, 60x30, and 60x20 bases and their flexible steel bottoms ready to go, as well as several sizes of round bases and a few specialty things like the 25x50mm cavalry lozenge bases in the bottom right pocket in the second picture.

Even if I haven’t been painting, I did find time for a game.  I mentioned that my brother and I had a Chaos Wars intro scenario on off at Cincycon last month.  Unfortunately, it had some balance issues, and we discovered that one side (the elves) would find it nearly impossible to win if the other side (the orcs/goblins) played a reasonable game and paid attention to their objectives.  We wondered, in retrospect, whether the basic forces were at all balanced.  So, my brother set up the two armies for an open field battle.  I took the elves, who had lost consistently during the demo games.  We played via Facetime, so all I have for pictures are some screen captures. 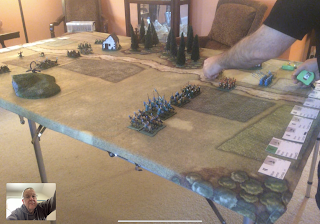 Here, as the armies advance to contact, the elves attempt to maintain a solid formation, and hope to use their bows to maximum advantage. 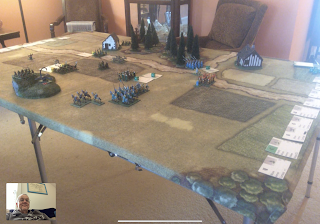 After some elvish dancing about, firing and falling back, etc., the elves were doing pretty well. 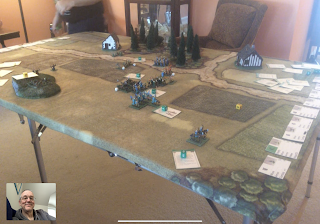 As the orcish casualties mounted, the situation grew ever more dire.  At the end, only one elven unit (some horse archers barely discernible at the lower right) was routed, and the goblins had but a single relatively intact unit.  As it was a unit of longbows who had wreaked significant damage on the elves, it was decided that the elves would not press the pursuit closely, but would permit the orcs to retire and lick their wounds.

All in all, not a bad game for an idle two hours on a Saturday afternoon.  The elves won so handily that we agreed that the problem we had had was the result of a scenario/victory condition issue rather than a basic imbalance of forces, so the next game is likely to be about changing the victory conditions for the demo scenario.