So, like many people, I have been transitioned to telework for an indefinite time.  Getting ready to ride this out at home has taken some time, and so far I have not been able to find a dedicated block of time for hobby activities.  Perhaps this week I will have the time management worked out better.  For the moment, that’s all I’m going to say about the pandemic.  Stay safe; stay sane.

Before this, I had been to two conventions in two weekends.  Scrum Con was put on in Silver Spring, Maryland, by the Second Saturday Scrum Club.  This was only its second year, and I missed last year.  It was a one-day event featuring both roleplaying games and miniature games, and I was one of several HAWKs who were hosting games.  Scrum Con was set up this year on a time-block system, in which the majority of the games started at the same time, with two time blocks, morning and afternoon.  Due to a late cancellation by another GM, I was afforded the opportunity to run my game in both time blocks, so I got to the facility comfortably early.  The venue was the Silver Spring Civic Center, which was clean and well lit, though lacking so much as a vending machine for onsite refreshment. Free parking was available in the municipal parking structure immediately across the street, which was pretty good.  Carts for GMs were recommended, and I have one, so that was not a problem.  I should have rehearsed how I was going to stack my boxes and bungee them in place, though, as I was running a 54mm game with some large boxes a little precariously arranged on my cart, and my bungee cords turned out to be shorter than I had thought.  That wasn’t the convention’s fault, of course. Scrum Con was spread out over three function rooms, which had been set up with round tables for RPG events, and rectangular tables for the miniatures events.  Two rooms were downstairs adjacent to each other, and the room I was in was upstairs.  An elevator was available to get my cart to my table.

I was mildly disappointed, though not surprised, to find that I didn’t end up with players for the morning game.  At least my table was already set up and ready to go.  I jumped into Duncan Adams’ Space Station Accipiter game, a perennial favorite HAWKs offering showcasing the large club collection of Buck Rogers semiflat figures from vintage 1930s home casting molds.  This was the first outing for a vintage Princess Ardala figure my son William found and painted for me a couple of years ago.
For my own game, I chose to run a 54mm skirmish game with Medieval Mayhem, the home rules that Ross Macfarlane and I put together as part of the HAWKs Battles for Beginners contest/project back in 2003.  I had just dusted off in September, after a rest of a couple of years, for Barrage 2019, about the same time that Scrum Con was soliciting for games, so I had been reminded that it was just the sort of easier to approach game that would be appropriate for a mixed genre convention.


Attendance may have been suppressed by the growing concern over the corona virus, but, in any case, a couple of my pre-registered players were among the folks who did not pick up their badges.  The scenario I was using is easiest with an even number of players, so, with five who showed up to play, I took a role in the action myself.  The original purpose of these rules (and this project) was to provide a game which any player would be able to pick up in a few turns, and I was pleased that was the case at Scrum Con.  By the third or fourth turn I scarcely had to adjudicate anything, and everyone seemed to be engaged, with some side discussion about the possibility of using the rules at home.  So, from my point of view, a success. 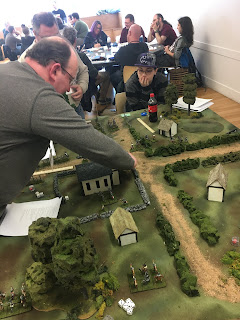 Once I had the game packed back up, I figured out where the nearest Starbucks was, dropped my boxes back off at the car, and wandered over to recaffeinate.  Generally, it was a good day, and I look forward to attending/GMing again next year.  I would recommend it to anyone within driving range.

The following weekend found me in the Cincinnati area for Cincycon.  My brother and I had talked about going.  It’s somewhat local to him (two hours) and is the designated gathering for the Chaos Wars Demo Team.  I had about decided not to go, when my partner urged me to go and spend time with my brother. It’s a very good local convention, with a reasonable selection of dealers, and a program of all three main tabletop genres—miniatures, RPGs, and board games.  I flew in to Indianapolis on Friday morning, where my brother picked me up on his way.  We were on site by the middle of the afternoon.  He set up his Chaos Wars demonstration scenario, and we played through it a couple of times while waiting for the crowd to build up.  Unfortunately for Cincycon, the coronavirus concerns were rapidly growing, and it looked to me as though attendance was down considerably from the other two years I’d gone.


As it seems like Cincycon may be my last gaming convention for a while, and, as two weeks have elapsed since then with symptoms, I am glad that I went.  I came home with a bunch of notes about how to display miniatures gaming for a broader audience, and an urge to paint some miniatures, so we’ll call it a success.

I had intended to go to Cold Wars the following weekend.  While it occurred, the fact that the state governments were already calling for cancellation of large gatherings before it was time for me to go reinforced my decision to pass.  Huzzah, out in mid-May, is starting to look like it is going to be within the timelines for social distancing.  More to follow, I suppose ... I’ve gotten some painting done the since the previous post, but I’ll save that for next time.